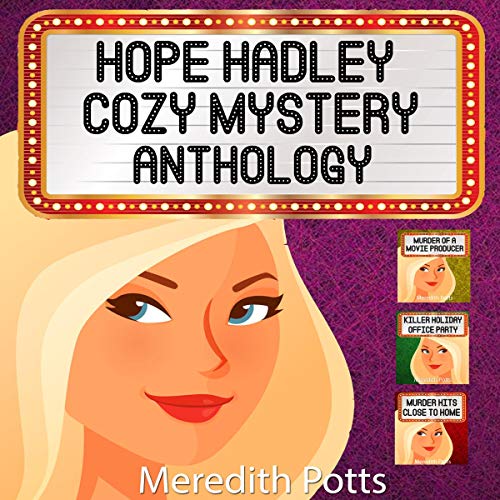 By: Meredith Potts
Narrated by: Stephanie Quinn
Try for $0.00

Hollywood has always been a cutthroat industry, but for Sophie Paulson, the backstabbing turns personal when her movie producer boyfriend, Paul Franklin, dumps her for another woman, then fires her out of the blue. Former actress turned amateur sleuth Hope Hadley arrives in town just as Paul is found murdered and the police suspect Sophie of the crime. Hope desperately races to discover the truth before her friend Sophie is put in jail for the rest of her life.

An advertising agency's holiday office party turns from celebration to horror when the owner of the company is found murdered the morning after their latest riotous shindig. It is up to feisty amateur sleuth Hope Hadley to figure out who the killer is before the holidays are ruined.

With Hope Hadley's latest murder investigation, things turn personal. How could it not when the victim is one of Hope's friends? The question becomes, can Hope push her emotions aside long enough to track down the killer?

***I was given this free review copy audiobook at my request and have voluntarily left this review.

Great cozy mystery short stories. I will absolutely be getting the other books in this series.
Highly recommended!!
The narrator, Stephanie Quinn did a great job.
Be aware that this anthology contains books 8-10.

Thrilling story, fun characters and the chase is on! I really enjoyed this book and recommend it.

Love the narration by Stephanie Quinn, she adds a lot to the stories. These are three goods one to give one an idea of the characters. Getting to know Hope as an Actress before she became a PI helping her brother. All are good and enjoyable
Given ARC for my voluntary review and my honest opinion

This is book eight throuh ten in the Hope Hadley series.Hope is a pi who used to be an actress.She gets to town just in time to deal with another friend being accused of murder.She needs new friends.lol Stephanie Quinn was a fine narrator.I was given this free review copy audiobook at my request and have voluntarily left this review.

Nice group of short cozies. None are much more than an hour long, which makes them perfect for listening when you don't have a lot of time to fill.
Don't expect a lot of character nor story development. A set up, a few questions, and a reveal is about all you're gonna get.

Hope Hadley Cozy Mystery Anthology by Meredith Potts is a wonderful collection of books featuring Hope Hadley. I love the witt and charm theses stories have. The narrator Stephanie Quinn is perfect for these stories. She adds the right emotions and is easy to listen to. I received this review copy audiobook and have voluntarily written this review. I will definitely listen to more books by this author and narrator.

loved the book, narrator, and definitely the story line!! Smooth flowing story, intrigue, and many emotions throughout! I highly recommend!!

Really enjoyed all three stories in this box set Holly is a great character looking forward to more .

It is the holidaysand she's at her boyfriends going to relax with homemade cookies when there is a knock at the door and she is informed of another murder. Hope cannot relax until this murder is solved. This book has a believable storyline and believable characters that are lighthearted. This was one of the books. Another is Murder of a Movie Producer. This one is differat than others. You just have to read/listen to see the difference. This one is emorional for her. Then Murder Hits Close to Home. This one she's engaged and her brother finally has a girlfriend. The narration is good and keeps you interested. Stephanie Quinn is a great Narrator and she keeps your interest. I enjoyed these books.

This set contains 3 of the Hope Hadley mysteries.
Murder of a movie producer
Killer Holiday Office party
Murder Hits close to home
They are all an enjoyable light entertaining listen. The narrator does a good job and the stories kept me interested and entertained. They are a pleasant way to spend your lunch hour.

again more Hope Hadley quirky adventures, not much more to say as the platform remains the same for each book.

but again worth reading if you like quick solved crime mysteries