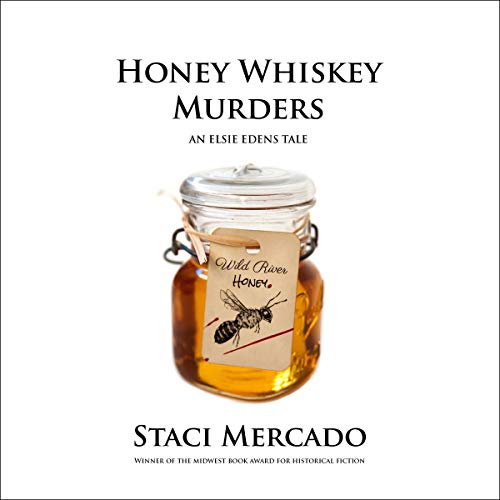 By: Staci Mercado
Narrated by: Cindy Piller
Try for $0.00

Elsie Edens, the teen detective who found her sister’s killer in Seeking Signs, is back. In her early twenties now, and solving cases on her own, Elsie has developed into a full-fledged investigator working for a prominent agency in Clinton, Iowa.

It’s Sunday, November 5, 1922. In the local paper, rural Iowa residents are shocked to read the headline: Coldest-blooded double murder in the history of Clinton county.

A well-known, respected husband and wife were brutally slain the previous night in their country store in Low Moor, Iowa. The local authorities, already under scrutiny for a rash of cold cases, call for help from an aging private investigator who sends Elsie, his young and ambitious protégée, to examine the crime scene.

Prohibition complicates her inquiries and leads her to an old friend who helps her uncover a motive for the murders. It seems the Chicago outfit has turned its attention to a small town in Iowa’s Driftless area - a rocky section of limestone bluffs, river bottoms, and immigrant families determined to survive.

During her investigation, Elsie is forced to relive a gruesome incident from her past - one that proves locals like her are perfectly capable of taking care of themselves.

Note: Honey Whiskey Murders is based on actual events.

Raise a glass to Elsie

Private investigator Elsie Edens get pulled in to investigate the brutal murders of a local shopkeeper and his wife. Not the simple robbery it seems at first glance, she is quickly uncovers ties to underground whiskey running, Al Capone and Chicago mafia, and her own tragic past. The second book of the series, it can easily stand alone, but there are many references to Elsie’s past and her development into a professional detective. Elsie is a fun fresh heroine with plenty of potential and plenty of baggage.


Cindy Piller does a beautiful job bringing Elsie and other characters to life. She transitions smoothly and clearly between Elsie and hardened criminal Tino Cerrone with ease and distinction. I’m looking forward to reading/listening to more of Elsie.

The narrator was amazing at giving life to the characters. The story kept me curious and listening and even sparked my interest about prohibition. Off to learn more on that subject!

I received a copy as a gift in return for my honest review. This review is my own.

I love how this story revolves around real-life unsolved murders. I had never heard of them before so it was quite enlightening. The narration was superb! Cindy's accents from mobster to regular citizen was pretty amazing. She really helped me fall into this story. I'm not sure I would have enjoyed the book as much without her narration.

*I received a free copy in return for my honest review*

In this well-written novel, Elsie seems to be maturing in her sleuth skills. She is tenacious in solving the mystery.

A really gripping historical mystery novel based on true events in the Midwest during the Prohibition era. Elsie is a private investigator in her early twenties who has had a hard and interesting life. She needs to solve a particularly brutal murder. The historical details are obviously very well researched, and this really adds to the story. Excellent!
Narrator Cindy Piller has a way of intensifying aspects of the story and making it even better.
I won a free audiobook copy in a giveaway!

This is a good historical fiction book that probably would’ve been a lot better had I read the first book in the series. Since I hadn’t, I didn’t know the background of characters and relationships so I didn’t really care about the characters. Other than that, interesting story and great narration. I received a review copy at my request and voluntarily reviewed.

A honey bee has no secrets.

Clinton County, 1922, a time of prohibition opening up opportunities to make both money and reputation. An husband and wife double murder is investigated by a young woman, Elsie Edens, now working for the elderly proprietor of a detective agency, whose own sister had been killed some years before. She'd not believed the verdict of suicide then and had looked I to the death with the he!p of a school friend, Walter. Reunited again, the couple dig deep into the concealed life of the community.

Told in the first person by Elsie heself , with occasional entries by a young man named Tino, the reader enjoys the full benefit of Elsie's observations and memories, together with her somewhat unconventional, for a detective, outlook on the law and life. It mixes history and fiction in a very personal but vivid way, setting a clear picture of the times and attitudes then prevelant, and felt very real and present. The conclusion delivered a sense of satisfactikn. Narration by Cindy Pillar was excellent, her pleasant voice capturing the nuances of Elsie's thoughts, her pacing and emotional impact set just right. My only reservation is that, when changing to the alternate speaker, there was no pause to indicate the move, which proved confusing on occasion.

This is an absolutely fitting book, author Stack Mercado successfully putting herself inside her main character to deliver a portrait of a place and time as well as an exciting and unusual crime thriller. I am very grateful to the rights holder of Honey Whiskey Murders, who, at my request freely gifted me with a complimentary copy via Audiobook Boom. Thank you. It was both enjoyable and instructive. I especially liked the excellent description of the life cycle of the honey bee, succinct yet full and fitting perfectly in context. This is, apparently, the second book in a series following the career of Elsie Edens. Not having read book one in no way affected my pleasure in the reading of this one, but I will certainly now go back to read book one as well as look out for any future stories. Recommended.