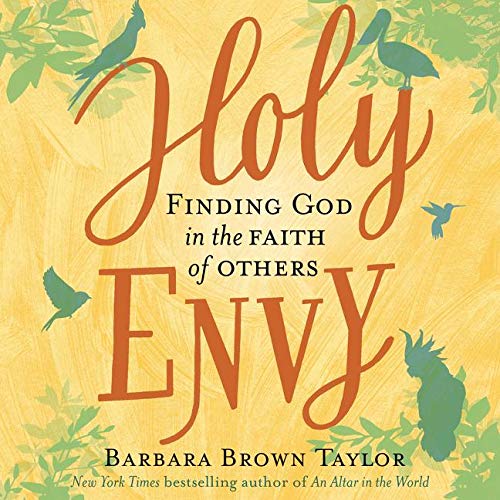 By: Barbara Brown Taylor
Narrated by: Hillary Huber
Try for $0.00

The renowned and beloved New York Times best-selling author of An Altar in the World and Learning to Walk in the Dark recounts her moving discoveries of finding the sacred in unexpected places while teaching the world’s religions to undergraduates in rural Georgia, revealing how God delights in confounding our expectations.

Barbara Brown Taylor continues her spiritual journey begun in Leaving Church of finding out what the world looks like after taking off her clergy collar. In Holy Envy, she contemplates the myriad ways other people and traditions encounter the transcendent, both by digging deeper into those traditions herself and by seeing them through her students’ eyes as she sets off with them on field trips to monasteries, temples, and mosques.

Troubled and inspired by what she learns, Taylor returns to her own tradition for guidance, finding new meaning in old teachings that have too often been used to exclude religious strangers instead of embracing the divine challenges they present. Reimagining some central stories from the religion she knows best, she takes heart in how often God chooses outsiders to teach insiders how out-of-bounds God really is.

Throughout Holy Envy, Taylor weaves together stories from the classroom with reflections on how her own spiritual journey has been complicated and renewed by connecting with people of other traditions - even those whose truths are quite different from hers.

The one constant in her odyssey is the sense that God is the one calling her to disown her version of God - a change that ultimately enriches her faith in other human beings and in God.

What listeners say about Holy Envy

BBT's appreciative gaze at other faiths.

I like Barbara Brown Taylor, but had I read this book a few years ago, I wouldn't have liked it. Like I didn't love her memoir "Leaving Church" because she seemed to be turning her back in the communal to follow her bliss, at least that is how I read it at the time. Since then I've also.struggled with churcha.d her story became more poignant.

So if I read this a few years ago, I wouldn't have liked it because I wouldn't have been ready. I was evangelical afterall, and was raised with the suspicion that other religions were the fellowship of demons. It at least wrong about reality

But I've lightened up, and have gained from my interactions with those with other faiths. Taylor describes her experience teaching world religion at Piedmont College, what learning about other faith traditions stirred up in her and what it meant in the life of her students. She doesn't lose her faith, but her faith changes and becomes more generous as she is able to appreciate the wisdom of other traditions

I loved everything about this book, especially the author’s honesty. She explained her spiritual questioning and journey eloquently. Her insights into the worlds’s major religions were eye-opening. Her point of view on Bible stories was unique. I would love to return to college just to take her class!

I could not finish the book. As much as I would love to have heard the rest of her comments, I could not stand the narration.

Do listen before others listen for you

very much with the time of any Christian or other theist that senses something left out of any of our standard religious faiths. Maybe it's somewhere not so far away.... but what you hear is that it is really about the journey.

I loved this book. This gives me hope for Christianity. We all have a different story and background. Knowledge calms our fear of the unknown.

Wow - I highly recommend this book! It was an emotional roller coaster as will as deeply spiritual!

Wow - I highly recommend this book! It was an emotional roller coaster as will as deeply spiritual!

Another homerun for BBT

Another beautiful, invaluable, relatable work by Taylor.
I can't wait to listen to it again.

I've enjoyed Taylor's "Leaving Church" and "An Altar in the World" so I looked forward to this one and it did not disappoint.

Holy Envy Finding God in the Faith of other

I listened to this book with an open mind. I find most of it boring. I also disagree with the way the writer veiws things.