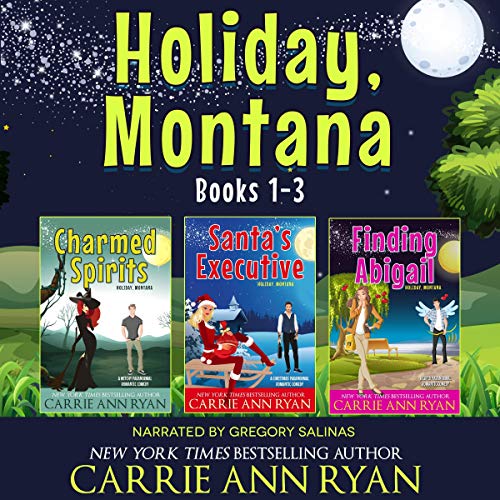 By: Carrie Ann Ryan
Narrated by: Gregory Salinas
Try for $0.00

In one small town in Montana, the stories you were told when you were a child might be more real than you think. The five Cooper brothers never knew their lives were so connected to the magic within until one fateful, fiery night. Together in one place for the first time, the first three novels will pull you in and never let you.

Charmed Spirits - Book 1
Matt Cooper loved Jordan Cross years ago and then she left him and Holiday, Montana. Now she’s back and his sexy witch will do everything in her power to fight back against a town that pushed her away. Jordan might think she’s ready for everything, but Matt has some secrets of his own. Their past is out to get them and it will take the strength of not only what they had, but also the promise of what is to come to find a way out.

Santa’s Executive - Book 2
Take one ex-bad boy and one perky town newcomer and you have the perfect Christmas recipe for a steamy romance. Justin Cooper might think he’s reformed but when he’s called on to pay back the ultimate gift, his old set of skills will come in handy. Rina Brewer’s one job is to make sure Justin does his-only falling for her charge wasn’t in the cards...or was it?

Finding Abigail - Book 3
Abigail Clarke has loved Sheriff Tyler Cooper since she was a little girl. Only the town’s top bachelor hasn’t thought of her as anything but the cute town teacher. Right when the stars align and Tyler opens his eyes, an enemy neither one knew they had has his sights on Abigail. Abigail is in danger and Tyler may be the only one to stand up to the threat and save her...or will she save him?

What listeners say about Holiday Montana: The Box Set, Books 1-3

Happy Holidays with a twist

This series was my introduction to Paranormal romance. Carrie Ann Ryan gives the holiday legends a fun twist. Gregory Salinas is masterful in the narration. ❤❤❤

Let me start by pointing out this is fantastic value. The three stories are each quite long and so very full of story.

Each of the books don’t forget the steam or the entertainment level. Yes there were moments when I wanted to smack main characters but isn’t that the sign of a well written book? That you care so much?

The narration was good and I loved that there wasn’t just heat each of the stories had a solid storyline to accompany the heat levels. Just wish I could give it more stars