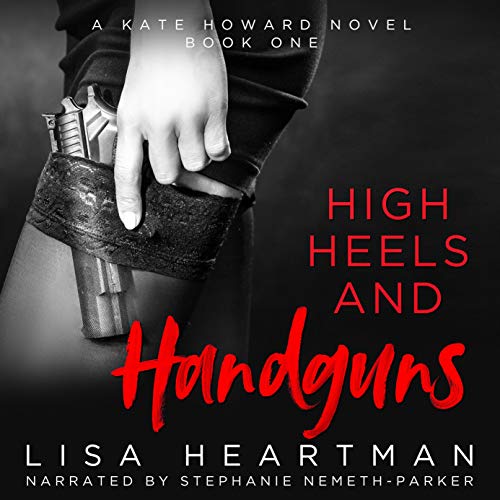 By: Lisa Heartman
Narrated by: Stephanie Nemeth-Parker
Try for $0.00

After an explosive and deadly end to her client’s reelection fundraiser, which left his young son in critical condition, Kate must accept help from an unwanted source: the soldier she loved and left in Afghanistan, bloody, broken, and barely alive.

Special Forces Officer Paxton Banks, Kate’s former captain — now an FBI agent — is assigned to investigate the attempt on her client’s life. After ten years, old emotions and new threats whip Kate's world into complicated chaos. But when other elected officials are threatened, Kate and Paxton must tamp down their fiery feelings to catch a madman hell-bent on revenge.

What listeners say about High Heels and Handguns

So many awesome elements!

I really enjoyed this story. Stephanie had such a nice, soothing voice, I could listen to her talk for hours... and obviously I did. Her narration brought the characters to life in my ears and was so engaging!

As far as the story goes, I really enjoyed it as well. Every time Kyle came into the story I just got this stupid grin on my face because he was such a loveable goof ball. I adore a quirky well done side character. I really loved Kate and Paxton as well. The push and pull between them was believably written because of their past. Kate is the kind of kickass woman I adore. I hope there will be more in the Kate Howard series, especially narrated by this narrator.

Kate and Paxton’s second chance love story was an entertaining listen. They had amazing chemistry and I enjoyed listening to them butt heads.

awesome thriller mixed with some romance.

I must warn you, this book is riveting... captivating. check it out for yourself. there is something in it for everyone. whather you like action, romance, mystery, or even a little comedy... this is for you.

High Heels and Handguns is a fun novel! Perfect blend of action, romance, suspense, and badassery! I can't wait for a follow up!

I listened to the audio book, which is superbly narrated. I would definitely listen to more by this narrator.

I really enjoyed the characters in this book. I did feel it was predictable but still liked the investigation. I enjoyed the connection between Kate and Paxton. I would definitely ready the next book in the series.

I was engaged and did not stop listening till the end.

I thoroughly enjoyed this book, the story grabbed my attention right from the start and held it captive straight to the end. Lisa Heartman is a gifted author, the storylines she created are interesting and original. Her characters are complex and nicely developed, they are likable and easy to relate to. I love that Kate Howard is her own person, strong and independent, a bit too independent because she comes off as a “one woman band” at times, playing only to her own tune. She is former military, special forces and is working independently in personal security and protection. After an attack on her client, she wants in on the FBI investigation and called in a favor to make it happen. Turns out her former Special Forces Captain, Paxton Banks is the lead on the case and who she will be working with. I loved the chemistry between them and how he could read her and know her next step. While she used more unconventional ways of finding things out he stuck to the rule book. I adored her neighbor Kyle, he was a great addition to the story, his carefree personality lightened things up too. There is never a dull moment in this book, the story is well plotted and the story flows naturally, it is a perfect blend of several genres and contains plenty of drama (relationship and crime), angst, mystery, thrilling suspense, action, heartfelt moments and romance. Lisa Heartman, thank you for this entertaining and enjoyable story, I am looking forward to checking out out more of your work.

Stephanie Nemeth-Parker is a terrific narrator and voice artist. She does a nice job portraying the characters, bringing them to life, giving each their own voice and personality. She sets the perfect tone for the story, captures and projects the characters emotions into her performance. She is an entertaining storyteller and a pleasure to listen to. Thank you for this great listen🎧

Looking forward to the next book! Don’t keep us waiting too long... will need my Katie and Paxton fix soon.

Action, Suspense, with a side of sexy

This was my first Lisa Heartman but not the last. I like action books so I enjoyed the pairing with a romantic story. it kept me engaged throughout. Stephanie Nemeth-Parker did a wonderful job narrating.

Kate was hard to take

With such a title as "High Heels and Handguns," I expected the main character to be a female badass. What I got was a know-it-all who kept saying and doing unnecessary things. She was annoying. Very.

I liked the story, for the most part, but I'm one and done.

Even the very good narration could not make me stay with this main character.

Lisa Heartman is a new author for me, but I loved High Heels and Handguns and will be watching for more of the series. There were great descriptions, an interesting story, good tension and likable characters. I thought it was a nice balance between action/suspense and rom com.

Stephanie Nemeth-Parker is as new narrator for me, but she did a fabulous job. I would listen to her again in the future.

Paxton Banks never thought he would meet Kate Howard again. Let alone in the middle of his FBI investigation.

What happens when a by the book special agent clashes with a free spirited rule breaker makes for an entertaining suspense with enough heat to set my kindle on fire.

I thoroughly enjoyed listening to this well wrirten romantic suspense with excellent narration provided by Stephanie who really seemed to understand what motivated the characters.

I received this Audiobook at my request and have voluntarily left this unbiased review.