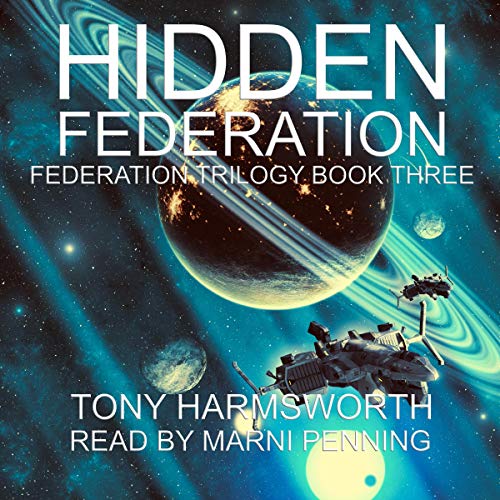 By: Tony Harmsworth
Narrated by: Marni Penning
Try for $0.00

Warning: It is essential to listen to the trilogy in the correct order – Federation; Federation & Earth; and finally Hidden Federation.

Alien university professor and author, Yol Rummy Blin Breganin, continues his research on the planet Earth. He introduces, into this final volume, some stories from the distant past of the Federation, which provide a greater insight into the vast alien empire.

In the only free and independent part of the planet Earth – the United States of America – the populace is becoming increasingly dissatisfied with the growing authoritarianism. With California in revolt, can the USA retain its own independence in this rebellious climate?

Elsewhere on Earth, in the Federation territories, is life becoming too comfortable for the ordinary humans? Will the world be allowed to settle down to its life of luxury or will it turn the new utopia into hell as it has always done in the past?

The final part of the Federation Trilogy contains the answers.

What listeners say about Hidden Federation

Great end to a series! Read them in order!

I really enjoyed this series. I listened to the first two books again when I picked up #3. I love the full arc of the story, and how the second and third book are more live. I like how he focused on more mundane aspects of human/alien lives.

I think Tony got the American response to such a proposal pretty spot on, especially considering how 2021 is going so far! ;)

Overall, a great series, and book.

Hooked, from the first book to the last.
Great story and if it ever happened this is the way it would be most preferred.
Great narration by Marni Penning giving the wealth of characters a voice, even if there was the odd Irish and east end of London accents in there.
Tony Harmsworth one to follow, if you liked this then try The Visitor another great book and with Marni as the characters once again.

A great story that says it all

Having read the first two of this trilogy this last one wraps up what has been a brilliant story - one that picks out contemporary issues wrapped in SciFi gold. Brilliant. I cant wait to read other Harmsworth books!