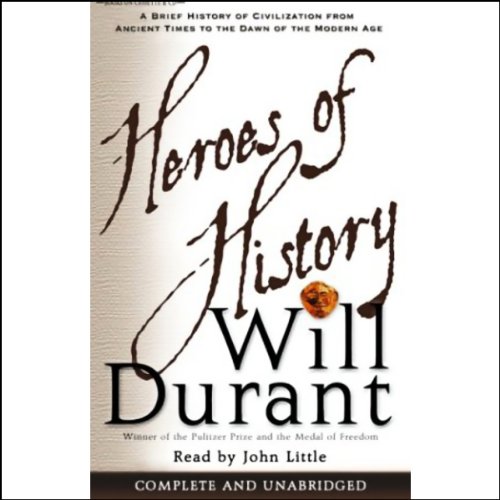 By: Will Durant
Narrated by: Grover Gardner
Try for $0.00

At Will Durant's death at 96, in 1981, his personal papers were dispersed among relatives, collectors, and archive houses. Twenty years later, scholar John Little discovered the previously unknown manuscript of Heroes of History in Durant's granddaughter's garage. Written shortly before he died, these 21 essays serve as an abbreviated version of Durant's best-selling, 11-volume series, The Story of Civilization. Durant traces the lives and ideas of those who have helped to define civilization, from Confucius to Shakespeare, from the Roman Empire to the Reformation, spanning thousands of years of human history. A volume of life-enhancing wit and wisdom, Heroes of History draws upon Durant's expansive knowledge and singular ability to translate distant events and complex ideas into easily accessible principles.
©2001 John Little, Monica Ariel Mihell, and William James Durant Easton (P)2003 The Audio Partners Publishing Corp.
Civilization Philosophy
Show more Show less

What listeners say about Heroes of History

A celebration of history

If an audiobook of Will and Ariel Durant's "The Story of Civilization", "one of the most famous and successful works of scholarship in American literary history" was avaialbe on Audible.com it would certainly be a monumental gift to the world. In "Heroes of History", which Durant wrote in his nineties, the reader gets a taste of a scholar who can communicate a passion for history to his readers.

A pretty good overview of world history - at least as much as can be covered in a few hours. The author even mentions names he's skipping over at various points, which provides a nice resource to go off and do additional resource.

The narration is fine - I love Grover Garner's voice, when it comes to these sorts of narratives.

I am not a professional historian but I have read more than my fair share about the founders and their faith. This book is by far the most accurate. I finished this book and almost immediately started it again and there are not too many books that I can say that about.

I do give this book five stars because of Durant's sharp, clear writing and sparkling style, and also because to be able to accomplish a competent sweep through civilization in such a short space is quite an accomplishment. The one downside is that one feels this work to be exactly what it is, a condensation of Durant's voluminous work on world history, and one is very often left feeling, "wait, we're done with that already?! I want more!"

The Hero's of History is a great overview of world (mostly focused on Western) history but ironically you would probably need a pretty decent world history background to keep up and like some other reviewers have mentioned you will need to dig deeper into the subjects that interest you. What is truly enjoyable here is Will Durant's prose read by Grover Gardner making the narrative even more appealing as Gardner's voice is what I would imagine someone as wise as Durant would sound. However, The "Dark Ages" as they used to be called are all but abandoned by the narrative again highlighting the emphasis on western culture while forgetting that much of the rest of the world was flourishing. Religion and particularly Christianity is placed at the forefront of much of the discussion but is reminiscent of a man who has found his faith as he came to terms with his own mortality in the twilight of his life as well as the outlook of a historical philosopher who saw the cultural forces like religion are often the drivers of change in humanity overtime. I recommend this book only because it is written by Will Durant, it accomplished what it could in such a limited amount of time but world history and its significance can not be boiled down to 12 hours.

For the love of history

No one loves history more than Will Durant. And arguably, no one writes more eloquently or vividly about history than he does.
It's hard to convey the superlative experience of listening to an audiobook written by Will Durant and narrated by Grover Gardner. History is revealed in the characters, while insights are gained through the analysis of significant events and those who witnessed them.
Durant's writing is transcendent—his use of language triumphant.
As for Grover Gardner—he has no equal in the reading of historical prose. With his narration, stories come to reality, and characters come to life.
This is a wonderful book.

I thought that the narrator did a fine job. The beginning drags a bit, but once the subject turns to the Greeks I found it became and remained very interesting. An engaging survey of some high points of history -- Durand has a gift for identifying critical moments and figures in history.

History through a religious eye

Fabulous writing without doubt, informative and well presented. I enjoyed this book very much. I would only comment that it had such a heavy relation to history in context of religion that it should be titled in such away to describe this.

I always have the compulsion to reconcile a book with its title. I am chagrined when I am unable to do that. It is like those covers of books that suck you in and leave you knowing in the end what they mean by the expression “artistic license.” Someone reviewed this book and thought a more appropriate title would be a View of History From 30,000 feet. I agree. It is more a distillation of thousands of years of human history down to 12 hrs and 10 min than about heroes. However, if you have ever thought of taking on the Durants' The Story of Civilization, you might wish to try this book on for size. It truly is a taste of that colossus. The Durants deserve 5 stars for their lives’ hard work, dedication and scholarship. Unfortunately, I could only muster 4 stars for this book.

This book is awesome in scope and in execution. This guy writes like Gibbon!

You can almost smell the pipe smoke

Avuncular. That's the only word to describe Will Durant's tone in this guided tour through several millennia. The author, a historian in his nineties, decorated with the Presidential Medal of Freedom-- America's highest civilian award-- isn't shy about giving his own judgement on the periods and figures he describes, or ocasionally switching from history to personal anecdote. But that's no bad thing in a man of such broad sympathies, such temperate wisdom. Durant doesn't lecture to you; he takes your hand and brings you on a ramble through the centuries.

This will serve as a good introduction to European history to those who know little of it so far. Those whose historical knowledge is more advanced won't learn very much new, but they might well be given a new perspective on what they do know.

The book is called Heroes of History, but heroes and villains seem to populate it in equal measure. Durant spends a dutiful (and short) chapters describing ancient China, Egypt and India, but he only warms to his theme when he reaches Ancient Greece. From the on, the focus remains resolutely upon the European mainland, until it shifts to the England of Queen Elizabeth at the very end.

Art history and drama are given special attention, along with religion-- Durant trained to be a priest but drifted away from his faith, and believers may find his sceptical warmth towards Christianity a little patronising. Secularists, on the other hand, might find it wooly-minded. But, on the whole, Durant is a genial guide, and offers some insights well worth attending to. Anyone interested in history, and especially the history of ideas, will take something from this book.