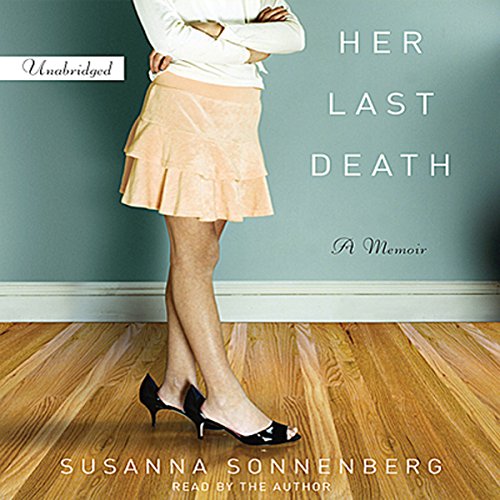 Her Last Death begins as the phone rings early one morning in the Montana house where Susanna Sonnenberg lives with her husband and two young sons. Her aunt is calling to tell Susanna her mother is in a coma after a car accident. She might not live. Any daughter would rush the thousands of miles to her mother's bedside. But Susanna cannot bring herself to go. Her courageous memoir explains why.

Glamorous, charismatic, and a compulsive liar, Susanna's mother seduced everyone who entered her orbit. With outrageous behavior and judgment tinged by drug use, she taught her child the art of sex and the benefits of lying. Susanna struggled to break out of this compelling world, determined, as many daughters are, not to become her mother.

Sonnenberg mines tender and startling memories as she tells of her fierce resolve to forge her independence, to become a woman capable of trust, and to be a good mother to her own children. Her Last Death is riveting, disarming, and stunningly told.

"An emotional thriller...a disturbing story, yet at the end you might feel like cheering. It is a beautiful, beautiful book." (Frank McCourt, author of Angela's Ashes and Teacher Man)

What listeners say about Her Last Death

The author has no moral compass but admits it. As someone else mentions she needlessly euthanizes a puppy that could have been given away and accurately depicts the abortion dilemma in detail. She is unlikable but interesting.

The novel wallows in the shallow glamour of her life, turning a rare and privileged childhood into an excuse for poor decisions. There are interesting anecdotes here, and a few sharp insights, but mostly the author whines about the lack of attention she received and how that justifies her weak character--and plotting!

After so many many men, so much money, sex, travel, dislocation and privilege for both the narrator and her mother, one still wonders if the final geographical cure, the one that ends the book, will really "take" and things will be okay for this woman and her two sons. One is left wondering if the life in Montana is just another way station on a continuing road to ever greater dysfunction. It's difficult to say, as the narrative really doesn't resolve but fades cleverly but suddenly at the end.

This book painstakingly details an absolutely horrific life, a train wreck from which the reader can't look away. The writing is good and stays interesting, from relationship to relationship, on and on, but could have benefitted by even a small amount of introspection. Instead, the author/narrator delivers it all in a flat, factual tone, with very little back story. The reader wonders why this woman never looks at her life and asks "what is wrong with this picture?".

But what have you learned?

I guess the thing that struck me at the end was "but what have you learned?" It seemed to be more of how Suzanna could punish her mother than what lessons she came out of the whole situation with. It's an easier task to be honest and critical about our pasts...but what really takes bravery is to be honest about present life. Because the book just "stopped," it's hard to interpret it's lessons when viewed in comparison to her current life.

Having a difficult relationship with my own mother, the anecdotes from the past were helpful to set a nice framework, but this book didn't carry those to the next logical step...Overall, I had hoped to see more resolution. Of course, perhaps that was her point...that we are always learning and there isn't ever a "real" resolution. Even so, there are still things we will do differently, today, from what have learned, yesterday.

IMHO it needed another couple of chapters...

Prolly the best book I've ever come across..

The author is very pointed and tells the story quite brilliant.. I've never come across something quite so good. you won't be disappointed in your choice to read or listen.

I didn't make it to the end - just too sordid.

how can the author dare write about such an obviously no moral compas, sex addict, drug use, pediphile, abortion, and more sex daughter and mother relationship. The more I got in to this book the more disgusting the story became. And this whole story is so sad because it is so true for alot of people. I would not recommend this book to anyone.

The author's use of humor during painful times is amusing and lessens the seriousness of this book. Overall the book was okay however, there were many times where to much description was used and made this listener at least, a little impatient.