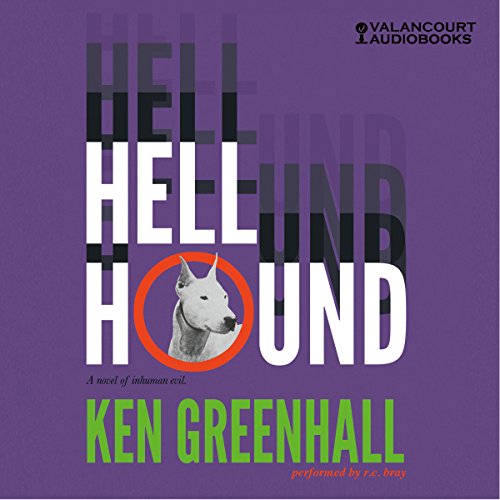 "What are the possibilities of my strength? That is a thought I have never had before. What if some morning as the old woman stood at the head of the staircase she were suddenly to feel a weight thrusting against the back of her legs? What if she were to lunge forward, grasping at the air, striking her thin skull against the edge of a stair? What would become of me if she were found unmoving at the bottom of the stairway?"

Such are the thoughts of Baxter, a sociopathic bull terrier on the hunt for the perfect master, as he contemplates the demise of his first victim. The basis for the acclaimed 1989 film Baxter, Ken Greenhall's utterly chilling and long-unobtainable Hell Hound (1977) has earned a reputation as a lost classic of horror fiction.

What listeners say about Hell Hound

So, this was another book I would have otherwise not sought out had it not been for the recommendation of R.C. Bray (narrator for the Audible copy I purchased). His recommendations continue to hold true and I really enjoyed this story. What I intended to be a weekend listen turned out to be only the second book I’ve completed in a single day (easy, given this was a 4.5-hour audiobook).

The idea of different points of view for the story was a welcome change to the traditional stories I have listened to. I loved the POV of Baxter and found myself anxiously awaiting his point of view as he moved from family to family, holding back his contempt for the humans he chose to live with.

Right from the start, I found myself a bit lost during the first family transition as it moved from Ms. Prescott over to his first family. It took me a bit to catch on to what had happened and it was at that point that the sociopathic nature of Baxter came to the forefront. The death of the child, and the method which Baxter planned it out, really took me by surprise. After thinking about it, however, this highlighted a key aspect of pet ownership that I feel many couples don’t think about as they bring a child into the family. What happens when the dog, who received lots of attention previously, stops receiving that level of attention? What goes on in their mind? It was an interesting thought process.

In line with the death of the Baby, there were several dramatic and emotional moments. The incident with Carl and Baxter’s puppies really shocked me. Likewise, the final scene between Carl and Baxter was quite shocking as well as I found myself really battling my feelings.

Ultimately, I feel the title was misleading as this wasn’t really a “hell hound” and more of a dog trying to set itself up with the family life it desired. There were shifting protagonists and antagonists throughout the story.

The final twist at the end really helped wrap the story up and bring you around full circle, to one of Baxter’s initial thoughts.

R.C. Bray did, as usual, a fantastic job narrating this story and his recommendation was well placed. An easy 5/5 story for a unique tale that kept me hooked throughout. I would definitely give this one a listen again in the future.

This is a very dark story told mostly from the perspective of a dog that only cares about his own well being and strength. It is a look at his lack of conscience when it comes to raising his position and status with different people and familys to become the most feared and most powerful. He kills people without mercy, and transfers a piece of himself into his final owner, leaving his mark forever. This was a gripping thriller that I listened to in the course of a day. I can say this book will definitely not be everyone’s cup of read but I found it fascinating.
The narration by R.C. Bray was masterful as always.
I highly recommend this book for anyone looking for something dark and different from the norm.

I received a free copy of this audiobook (the review is entirely voluntary) and I really loved everything about it. The writing, the story and the narration were all excellent.

It was a lot more than what I judged from the cover, which as everybody knows, one should never do. I thought it was just going to be another rabid doggy tale (tail, get it?). It is also super difficult to pull of the inner monologue of animals effectively, but somehow Greenhall did it. Who the hell is this Greenhall guy anyway?

But I do anyway.

4.5 Stars rounded up to 5 based on strong narration, excellent writing and amusing inner doggie monologues.

Dog who is a sociopath turns boy into sociopath

The ending was amazing, full circle.

This story was not at all what I expected.

Throughout the book I kept getting the feeling that the author was writing about a serial killer, not a dog, and the lengths they go to.

The characters seemed flat and the plot contrived.

RC Bray is a Master Storyteller but this book was just bad literature.

Worst book I have ever read or listened to. Only good thing was that Bray narrated it.

I loved R.C. Bray's reading but this book wasn't for me.
I received this audio book upon request from freeaudiobookcodes. com in exchange for a review.

I love dogs and though I despise people who are cruel to them, I just couldn't get truly involved in the book.
The concept of the story from the dogs point of view does give a great spin thou. He just wants the warmth of love and how can we not understand but that goes too far.
I didn't find it 'horror' so to speak but maybe I'm just too jaded.

it was a good book until a child got killed. spoiler alert sorry. Thank you.

This multi-faceted story deals with many aspects of empathy and lack thereof . On the surface it is a horror story and is comprised of psychopathy, hypermasculinity, instincts, survival, misogyny, our need for emotional stimulation and the cyclical nature of life--a recipe for true horror.

I immensely enjoyed the book from the very start. between the interesting style of writing using mostly inner monologue and the outstanding narration brought this book to life.

The book-length is on the shorter side but work well with the style of writing.

Warning. There are some very dark moments in this book that will not be to everyone's taste.

Excellently narrated and a psychologically disturbing tale. I loved the insights from the dog's point of view.

This book was the strangest I’ve ever read... almost every character, from the old lady, her daughter, Carl’s parents, Veronica’s Dad... they ALL behaved like sociopaths, not just the dog.

There were only about two characters with normal emotions who behaved like real people.

The book was filled with weird ideas, characters thinking bizarre things “I’d rather my daughter get pregnant than my spaniel”, and every single person in the story referred to Baxter as “it”.
I’ve never met a person who refers to their dog as “it”, instead of “he or she”.... let alone an entire town who calls a dog “it”....

Baxter was not scary, not very memorable, I was expecting something more from him being the protagonist, but really he was pretty forgettable.

Beware if you are a dog lover, you aren’t likely to enjoy this book. There are puppies and it ends badly. There is an unpleasant scene where Baxter ‘rapes’ another dog.

And then there is Carl. He is horrible and a little unsettling, but for a book supposedly about a crazy dog, this kid shows himself to be the real sociopath.

Do yourself a favour and if you want to read about a murderous dog, read Cujo.