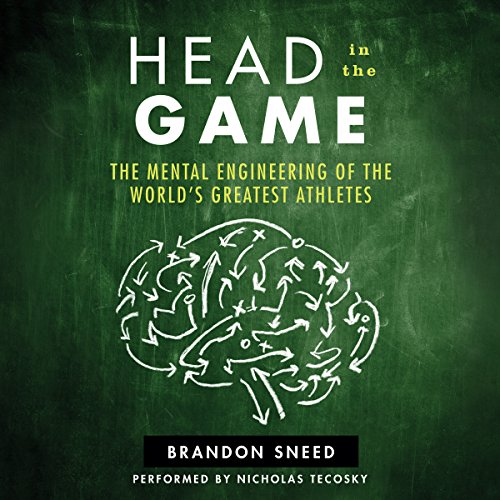 Head in the Game

By: Brandon Sneed
Narrated by: Nicholas Tecosky
Try for $0.00

An intriguing blend of science and sports that explores how some of the world's greatest athletes are utilizing the last frontier of performance-enhancing technology - the mental mapping and engineering of their own brains - for peak performance and what it means for the future of athleticism, sports, and the rest of us.

Moneyball showed how statistics were revolutionizing baseball. The Sports Gene revealed the role genetics play in sports. Now, Head in the Game examines the next evolution: how mental engineering - the manipulation of the cognitive processes of the brain - can make gifted athletes even better.

For years technology - from EEG (electroencephalogram) to fMRI (functional magnetic resonance imaging) to video games, tablets, and personal data collection devices - have been used with soldiers to understand their physical and mental functioning. Touching on brain functionality vital to sports - both the "hard" (coordination, stimuli processing, functional memory, decision making, load processing) and the "soft" (emotion regulation, visualization, psychology, mindfulness) - this tech is now being adopted by scores of championship franchises and top athletes - including scrappy underdogs forced to innovate and elite players looking for an advantage.

Star NFL quarterbacks Russell Wilson and Tom Brady, the NBA's Kyle Korver, and Olympic volleyball champion Kerri Walsh are using mental engineering to up their game. It's not luck that has transformed the San Antonio Spurs into a formidable force - it's science, Sneed demonstrates. As mental engineering becomes widespread - taking athletes who are already freaks of nature and making them better - the impact on the multibillion-dollar sports industry will be dramatic on players, managers, trainers, owners, and even fans. Interviewing athletes and coaches, visiting training camps and sports science firms, Brandon Sneed offers a firsthand, on-the-ground look at this exciting breakthrough that has the potential to transform the game - and all our lives.

What listeners say about Head in the Game

Boring. Nothing to do with Athletes

Boring book. More science than talking about mentality in sports. Basically, use expensive labs and technology to get an edge.

Felt like he was just selling the idea of this brain testing like it was something to buy in a store. Did not learn anything that would help me in a sport playing or coaching. Nothing motivational even though I didn't look for it to be totally motivating. When I finish books, I usually have a certain drive to want to do something and use the info I've gained. Nothing here.

As an athlete myself and a game designer I found this book absolutely fascinating and it absorbed me from page 1!

Head in the Game

This is an amazing book with a lot of interesting anecdotes. I enjoyed listening to the narrator. He has an excellent voice.

Excellent survey of what is going on in the heads of athletes, coaches, and trainers with the gear, tech, science that is quickly developing. With the backdrop of Brandon's story and his full immersion into the research it makes the survey richer and a more interesting read.