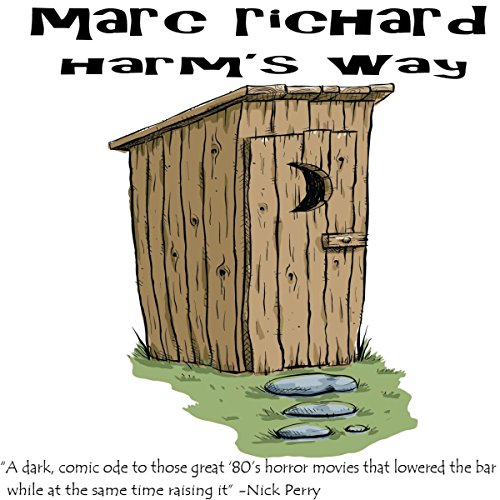 A pack of teens. A cabin in the woods. And a killer with a love for slapstick.

“A dark, comic ode to those great 80's horror movies that lowered the bar while at the same time raising it” -Nick Perry

An unlikeable cast of teenage clichés, out for a week in a cabin in the middle of nowhere. What could possibly go wrong?

Hey, who left that dead girl skewered on the porch?

All are suspect, as the slayings become more creative. And more ridiculous.

Hell of a way to spend a vacation.

Will they find out who the killer is in time to stop this madness, or will this mean the end for all?

Can a psychopath really fit in an outhouse hole?

Can you re-capitate someone with a welder’s torch?

Will everyone really see your dirty pillows?

The answers to those age-old questions are here.

For an extra bit of fun, the text contains a code that reveals the killer! Maybe you can figure it out before these dummies.

Buy this audiobook now for a bloody pie in the face.

What listeners say about Harm's Way: A Horror Comedy

This one left me confused. As an avid reader of all kinds of books I realize there is s line within each genre that only the absolute fans can cross. The book was on the other side for me. Admittedly I struggled with the use of the N word by a non-black author and the way the only black person is portrayed. There was a lot of things going on that ended up seeming like a gumbo of insanity with absurd sex and violence thrown in. This book is for those who want a book written by Tim Dorsey after an acid trip. It was too much for me but may be just right for you.

Teens at a cabin in the woods. Such a hokey premise. Once I started listening I was hooked. The concept is the same as all 80's slasher flicks, someone is picking the kids off one by one for no reason. The real hook is the creative deaths. If you enjoy your 80's slashers, give it a try. We'll worth the money.

A great new voice in comedy and horror

Would you listen to Harm's Way again? Why?

Absolutely. David S. Dear did a great job with the narration. He hit all the right notes and made the characters believable. And given that their were a number of main characters, I was never confused as to who was speaking.

I especially liked the way Marc Richard walked the fine line between comedy and weird horror. This was an original book that took an old premise and turned it on its head. The humor was reminiscent of Vonnegut, South Park and Hunter S. Thompson. The horror was gruesome in a way that horror hounds will love. The characters are first rate and they all feel like real people.

Have you listened to any of David S. Dear’s other performances before? How does this one compare?

This is my first.

It certainly made me laugh, from the first chapter.

If you want something new and fresh, and who doesn't?, then check this one out!

What about David S. Dear’s performance did you like?

It was good. Had a nice voice to capture the theme of the story.

It's a book form in scary movie style. The author goes after the 80's horror movies and kills it! All the 80's stereotypes and horrible ways to die are here in the pages. Delivered in a wonderful fashion by a great narrator. The characters are immediately recognizable. The deaths memorable. The villain classic 80's. loved it loved it loved it! I was voluntarily provided this free review copy audiobook by the author, narrator, or publisher.

So good. Narration was spot on, story is laugh out loud hilarious. You don't want to miss this!

a murderous mystery is afoot in this whimsical whodunit surrounding a group of social outcasts and walking clechies on vacation and haphazardly pulled into a interesting investigation...
This review copy audiobook was provided by the author, narrator, or publisher at no cost."

This is a pretty funny horror story. It's a bit absurd at times (a skewered dead girl on the porch is ignored for most of the book) but that gives the story its peculiar humour. Stereotyped characters are heavily ridiculed and that was refreshing. I liked it.

A campy horror with a good bit of humor. This was an enjoyable if somewhat predictable book.

This was a fun listen of typical crazy kids on camping trip with a sadistic killer on the loose. It was scary in some part with a touch of humor with the characters. I recommend it to anyone who wants to reminisce of the 80’s horror shows. This audiobook was given by the author, narrator, or publisher at no cost in exchange for an unbiased review via Audiobook Boom. Thank you