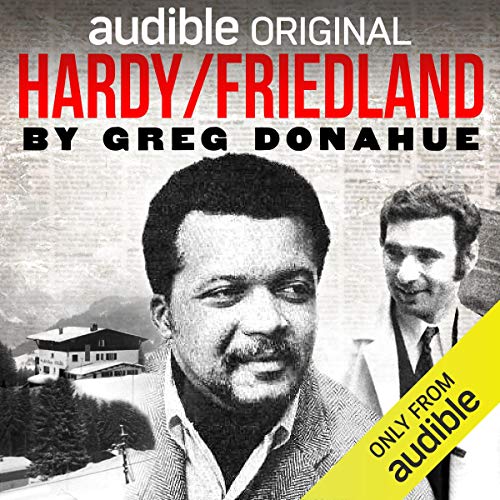 A lonely chalet at the summit of a snow-capped peak was the last place you would expect to find David Hardy. As an intrepid political reporter for the Daily News, the New Jersey native spent most of his time cornering officials in the halls and backrooms of the state’s government buildings or poring over the endless handwritten notes that covered his cluttered newsroom desk. In fact, the flight to Switzerland was one of the first times that Hardy had ever been on a plane.

But in March of 1986, a cassette tape landed on Hardy’s desk that changed everything. The voice on the recording belonged to a dead man, an allegedly corrupt state senator from New Jersey named David Friedland, who had downed a cocktail of barbiturates and alcohol before a scuba diving outing in the Bahamas. According to initial reports, Friedland never resurfaced from the dive, but federal investigators believed otherwise. They were convinced the brash politician had faked his own death to avoid prosecution for accepting kickbacks. To Hardy’s amazement, the tape confirmed their suspicions. “I am alive and in fear for my life,” Friedland began, his anxiety cutting through the scratchy analog recording.

Hardy’s reporting from the trip earned awards, accolades, and a Pulitzer nomination for investigative reporting, but it wasn’t just the scoop of a lifetime. It was the chance to cement an immutable journalistic legacy. That’s because, at the same time he was traveling in secret halfway around the world, Hardy was also suing his employer for racial discrimination. The Daily News - the same paper that had nominated him for journalism’s top prize - refused to settle and Hardy, along with three co-plaintiffs, wouldn’t back down.

Hardy/Friedland tells the story of David Hardy’s journalistic legacy and David Friedland’s brazen escape from justice through the eyes of the relentless reporter. One part globetrotting journalist chasing the scoop of a lifetime, and one part tense courtroom drama, Hardy/Friedland shines a light on a pioneering reporter and the largely forgotten legacy of a lawsuit that changed newsrooms across the country. Indeed, the landmark case marked the first time that editorial employees took a newsroom discrimination suit to trial. As the journalist Causewell Vaughn once said, “Every time a person of color breaks through that glass ceiling in journalism, they have David Hardy to thank.”

Greg Donahue is a writer and documentary filmmaker whose work has appeared in Atavist Magazine, The Guardian, Discovery, Vice, Al Jazeera, and Marie Claire, among others. He currently resides in New York City with his wife and daughter.

Whether rooted in history, science, or their life, these listens are much-acclaimed works of truly gifted authors.

From iconic memoirs to far-out fantasies, check out our list of the 20 best audiobooks read by their author.

What listeners say about Hardy/Friedland

You won’t regret it!

This book kept me on the edge of my seat. It was the perfect read. Not too short not too long. I really like how it included mystery and suspense as well as highlighting one of the greatest moments in history for journalism and black culture.

Dave Hardy’s story needs to be told and retold

So thrilled that Dave Hardy’s story has finally been told. Dave was a man of principal, a gentle giant with a heart of gold and commitment to advancing racial justice for black journalists. Hearing his sweet voice was a bittersweet surprise ❤️

Greg, I so appreciate this! Though I was young when a lot of this happened I remember my dad talking to me about this case. Hearing is voice definitely made me cry. Thank you again for documenting this historic event. Now this history will never be forgotten!