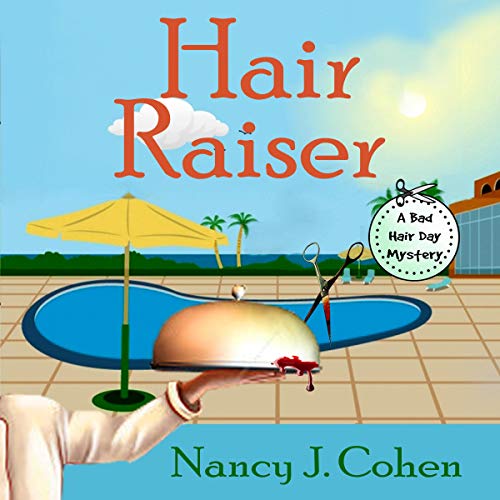 Hairstylist Marla Shore volunteers for Taste of the World, a fundraiser sponsored by Ocean Guard. It is a decision she soon regrets. First Chef Pierre's rum-soaked bananas Foster goes up in flames, making her wonder if sabotage caused the incident. Her suspicions deepen as more chefs drop off the roster and Ocean Guard's attorney is murdered. Does the lawyer's death relate to an estate being managed by the group? If their gala fails, this property will fall into the hands of a mysterious heir. With a killer on the loose, Marla has a lot more to worry about than which canapes her chefs should serve. She'd better comb through the knot of suspects to catch the bad guy before he strikes again.

What listeners say about Hair Raiser

2nd Book as Great as the First

I received this audiobook free for an honest review. I just received this book from the author and was excited to listen to it. Nancy Cohen does an excellent job of giving you suspense, thrill and romance. Marla's relationship with Dalton Vail continues from the first book. Such a cute couple. I thought I had the murder figured out, but the ending was a surprise. Nancy does a great job of keeping the listener/reader's interest. Mary Ann Jacob does a wonderful job with each character. Nancy builds them exquisitely and Mary Ann does a fabulous job of presenting them to the listener. Each character is unique and the reader enhances each one of them. Looking forward to the next book. Keep up the great work.

Sabotage against the ocean

In Hair Raiser by Nancy J. Cohen, Marla Shore has volunteered to help her cousin Cynthia with Taste of the World, a major fundraiser for the Ocean Guard charity. If they do not succeed this year or fail to keep their beach property in Florida clean, the property will revert to an unknown heir. So when her cousin finds medical waste dumped on the beach, this proves to be a problem. Further, someone has been scaring away the famous chefs from the fundraiser using threatening letters and sabotage. Could the unnamed heir be a member of the Ocean Guard board in order to stop them from keeping the property for good? This becomes a distinct possibility when the lawyer on the board, whose partnership wrote up the will many years ago but who still seems to know who the heir is gets brutally murdered, bludgeoned to death.

Detective Dalton Vail is upset that Marla is getting herself involved again in a murder, especially since he is interested in her romantically. But Marla’s family is pushing a different man on her. Dealing with all this while also still trying to run her hair salon, where Marla snoops by having conversations with her customers makes her life really wild.

The plot of this book comes with a good premise. Being set in the south of Florida, it suits well to use the context of an oceanic environmental charity for the basis of the mystery. I also like the way the book uses the setting of Marla’s hair salon to let her do her detection, since people so often tell everything to their hairdressers as they sit getting their hair done week to week or month to month.

This book does a good job of portraying the American Jewish culture of Marla’s family. They have a kosher Thanksgiving feast and are eager to push a rich Jewish man on Marla, whether or not he is nice. But everyone has skeletons in his or her closet. But despite this fact, the characters in this book do not have the depth that I like to see in books. I don’t picture the people other than Marla and the two men fighting for her affections, Vail and David. I also did not like the way Marla takes such obvious risks in going out on her own in dangerous situations. The book actually telegraphs bad situations and characters to the reader in advance, which gets annoying after a while.

I continue to like the choice of Mary Ann Jacobs as the narrator of the book. She has a unique-sounding voice that gives good expression to the book.

Hair Raiser is an enjoyable sequel to Permed to Death, but it doesn’t quite measure up to the level set by the first book in the series. I did find myself rooting for Marla’s happiness, and I hope to see better things in her future in upcoming books. I give this book four stars.

This cozy mystery is sure to entertain. I finished the listen a month ago and the chuckles and characters have stayed with me.

A hair raiser of a mystery!

When savvy hairstylist Marla Shore volunteers for a fundraiser, she has to comb through a knot of suspects to determine who’s sabotaging the gala event. Participating chefs are dropping off the roster like hot rollers, and it’s only through a series of hair-raising exploits that the brazen beautician can tease the truth from them. Too late to stop a murder, Marla must salvage the grand affair before she’s moussed into oblivion.

Can Marla's shear her way through the lies to catch a killer? Before the killer buries her for good?

Hair Raiser was originally published by Kensington Publishing Corp. This Author’s Edition has been revised and updated with added bonus materials.

Another fun Bad Hair Day mystery from the pen of Nancy J. Cohen.

Well plotted and written, with plenty of twists and turns to keep you turning the pages (or listening) right through until the hair splitting conclusion.

These audio books are great fun to listen to. And well narrated by Mary Ann Jacobs.

I voluntarily listened and reviewed an Advance Reader Copy of this book.

Published by Orange Grove Press and given by the author.

This is a great book; this is the second book in the Bad Hair Day Mystery series written by Nancy J. Cohen and narrated by Mary Ann Jacobs. Hairstylist Marla Shore volunteers for Taste of the World, a fundraiser sponsored by Ocean Guard. It is a decision she soon regrets. First Chef Pierre's rum-soaked bananas Foster goes up in flames, making her wonder if sabotage caused the incident. Her suspicions deepen as more chefs drop off the roster and Ocean Guard's attorney is murdered. Does the lawyer's death relate to an estate being managed by the group? If their gala fails, this property will fall into the hands of a mysterious heir. With a killer on the loose, Marla has a lot more to worry about than which canapes her chefs should serve. She'd better comb through the knot of suspects to catch the bad guy before he strikes again.

This is a great book with a wonderful story and well developed characters. This book will keep you reading/listening long into the night and you will not want to put this book down until you finish. This was such a great read and full of surprises.
The narrator Mary Ann Jacobs did a wonderful job, and was very easy to listen too. She did a great job with the different characters and their voices.
If you are looking for a great book, then you need to read/listen to this book. I can’t wait to read the next book by this author. Once I started listening to this book, I didn’t want to stop until the end.
I was voluntarily provided this review copy audiobook at no charge by the author, publisher and/or narrator.

Another very entertaining and enjoyable cozy mystery. I enjoyed this book more than the first book in the series. Romance, suspense, mystery and mishaps all wrapped up in a fun, light, interesting and engaging story. Nancy Cohen's books are just all around good fun and perfect for the days you just want something light but entertaining to listen to.

The story is constantly moving forward and something is always happening. Never a dull moment.

Marla and Dalton are back as well as a great cast of likable characters as usual. Looking forward to listening/reading the rest of the series.

Mary Ann Jacobs did a great job with the narration. Nice voice, easy to listen to for long periods of time. Clearly spoken with a nice even pace. Good character voices. Perfect delivery. She brought the story and the characters to life. Very enjoyable.

I didn't enjoy this book as much as I did book 1 but I will still recommend it because its good. Nancy J. Cohen knows how to pull off a murder mystery and make it fun. The author did a great job making each character stand out. I can't wait to see what happens next with Marla.
"I was voluntarily provided this free review copy audiobook by the author, narrator, or publisher."

This is book two in the series. Nancy Cohen does a nice job with this fun cozy mystery. Marla Shore is a great character. I really enjoyed how she was always evaluating peoples hair styles seems real to me. I thought Mary Ann Jacobs did a wonderful job of narrating this book. I look forward to more in this series. I was gifted this book but this is my honest review.

I liked this second book better than the first. The characters are established and the mystery was complex and intriguing. I loved the suspense in the story and all the excitement and drama that walking into dangerous situations brings. I liked that the author made this book more dramatic. I loved that Marla gets stuck into investigations and doesn't shy away when things get scary. I definitely want to continue reading this series.

I listened to this book in a few sittings but I found that I wanted to keep listening instead of stopping to do other things. It kept my attention very well and I enjoyed listening t it.

I voluntarily received a review copy.

Keeps you Guessing to the End

I enjoyed listening to this mystery of who is trying to sabotage the Taste of the World fundraiser and the situations that Marla finds herself in as she tries to figure out what is going on. Marla works her way through the suspects wanting to eliminate some, but tries to be fair. All the while she also is trying to figure out who is trying to keep Ocean Guard from taking possession of the preserve and if the two events are connected.
I liked how she went about combining interviewing suspects, gathering clues, and finding chefs to take part in Taste of the World. She also finds time to combine dating with sleuthing and still work her day job.
I enjoyed the narrator of this book as well. She did a good job in the voices for the different characters.
This was an interesting mystery and I plan to explore more in the series. “I voluntarily received a review copy of this audiobook from the author.”