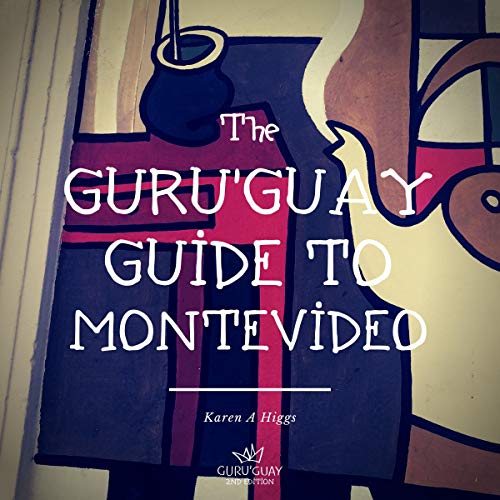 The Guru'Guay Guide to Montevideo

With just one and a half million residents, Montevideo is small enough to get around on foot and the locals are extremely friendly, like you'd find in a small town.

As you'll listen, you'll find there are so many things to do that you're going to want to spend at least four days and three nights to really get a flavour of the city. Though if you can, spend longer and make side-trips to deserted beaches, wine country, and ride with gauchos in the interior, known as "Uruguay profundo". And plan to sleep a lot of siestas. Because you're going to want to dive into the local music scene and shows don't start till late.

The secret delights of Montevideo are not evident. It's not an easy city to get a handle on, even when you speak Spanish. Use this guide together with our website www.guruguay.com and find us on social media. Then you will have access to the kind of up-to-date, insider knowledge that only a local has. Because unlike other international travel guides to Uruguay, this guide is written - and read to you - by an author who is an internationally recognised expert on Uruguay and who has called Montevideo her home for over two decades. Montevideo remains a unique off-the-radar destination in South America. Lucky you.

The Guru'Guay Guide to Montevideo, written and narrated by Karen A Higgs.

Recorded at Vivace Music and Ssendero studios in Montevideo, Uruguay.

Guru'Guay is proud to be part of Uruguay Natural, the country brand of Uruguay.

What listeners say about The Guru'Guay Guide to Montevideo

I've been curious about Uruguay and then had the pleasure of meeting Karen Higgs. Her knowledge and passion for her country was amazing. She got me excited with her passion so I just had to get the book. Wow. I didn't realize all that Uruguay offers. Not only rich in culture and history yet also rich in beauty and fun places to visit. Along with the food choices. I shared this with my husband who had not even thought about visiting this country and now he is ready to go when we are able to travel again. This is an excellent read/listen for those who are history buffs and those of us that love to travel and experience new cultures. She paints pictures with her words.

I loved this audiobook. Karen sounds like a friend as she describes her city with love. She struggles with a few Spanish words showing her humanity and making the rest of us feel like we aren’t going to be judged harshly for our pronunciation. She portrays a friendly and kind populace and a beautiful city. I want to go even more now and I know who I will be staying with

Read by the author, Karen Higgs, this audio format of the second edition of her Guru’Guay Guide To Montevideo, is perfect for tourists and new immigrants who prefer to carry their travel guide information in digital devices. Even long time residents will learn something new. Karen lives here year-round, and her genuine enthusiasm for her adopted city shines through every authoritative word. It’s the perfect introduction to Uruguay’s distinctive European-Latino fusion based culture, the peaceful easy pace of life, fresh food, wonderful wines and good transport and communication services. As Karen points out, the small capital of Uruguay, Montevideo, offers many easily accessed opportunities to sample Uruguayan culture, history and architecture for a few days before you travel into the interior of the country. Her advice will ensure that you see and experience the best of Montevideo.
When Karen (and I) came to live here around 20 years ago, tourism in Uruguay was very low-key, even lacklustre. A frequently expressed attitude was that a tiny country with only 3.25m people offered nothing much of interest to the traveller apart from wonderful beaches in summer, fabulous meat and wine year-round, and a dazzling reputation on the world football arena. Even in Montevideo itself, if you couldn’t read or understand spoken Spanish, without local contacts it was difficult for the independent traveller to find comprehensive, organised and accurate, up to date information on services, attractions and events, in any language at all. The result was that until relatively recently, the city of Montevideo was one of the best kept tourism secrets in Latin America. Though information is now more widely available by internet (and there’s good coverage across the country) this comprehensive book has gathered everything and more that the traveller needs to know into the one place. Each chapter begins with the topic it covers, which makes searching particular topics easy, and they’re loaded with information, explanations, advice and tips on topics such as Clothing, Money and Tipping, Things To Do, Festivals, Outdoor Activities and many more. Every traveller to Uruguay needs this one, comprehensive, guide to the city of Montevideo - Alison Schwabe

It really reflects the idiosyncrasy of our country, our culture. Proud to have you here!

Karen is an extraordinary Guru'Guay Guide!

This audible is bárbaro! Karen really knows how to present Uruguay and seduce you to visit it as soon as possible. Each selected attraction is perfectly described with sounds, images and scents, because this guide was written by someone who lives in Uruguay for over twenty years. So, she is the perfect curator of uruguayan attractions. She also integrates reviews of other visitors.
Karen, if you add ambient sounds or traditional music, it would be amazing!
I really enjoyed the chapter on Uruguayan expressions. Karen adds passion in each intonation, it shows that she loves Uruguay.
So... don't sleep “siestas” and add Uruguay to your wish list!

I am a big fan of audiobooks and thoroughly enjoyed this presentation of the "Guru 'Guay Guide to Montevideo". Ms. Higgs, the author and narrator, clearly has great knowledge of and love for her adopted city and country. She relates having been associated with and involved in tourism and expat interests there for many years. In addition to simple facts, throughout the presentation she provides numerous tips and insights pertinent to a visit to Montevideo ( and sometimes other areas of Uruguay). She often provides references to further resources available if deeper research into a topic is desired. The enthusiasm and energy she projects maked the narration quite enjoyable. I did sometimes have difficulty maintaining my focus on the narration...invariably because she had again prompted me to want to stop and book a flight to Montevideo. Then I would remember the virus, sigh, and return to my vicarious enjoyment of the city and country through the presentation. Even the acknowledgements (which I would usually gloss over) provided interesting tidbits of information. The table of contents conveniently demarcates the various topics addressed by the author. I really enjoyed and recommend "Guru "Guay Guide to Montevideo"!

Before travelling to Uruguay last year, we purchased The Guru’guay Guide to Uruguay and Guru’guay Guide to Montevideo – both were invaluable, we booked two of the recommended hotels, L’Auberge in Punta Del Este and Hotel Alma Historica in Montevideo and were not disappointed. We were planning on returning to Uruguay in July 2020, but the virus has resulted in plans being put on hold for the immediate future. When I heard there was an updated audiobook of the Guru’guay Guide to Montevideo, I had to download and listen. The audiobook is a gem and creates a wonderful visual picture. The author also narrates the book and has managed to capture the essence of Uruguay and Montevideo, listening brought back lovely memories of the places we visited last year, the Mercado del Puerto, the Montevideo Wine Experience, Es Mercat, Café Gourmand, Sin Pretensiones and many others. I learnt of places we missed and events we would like to attend - the vibrant music scene, the carnival, candombe and Cemetery, which the author rates as on a par with Recoleta Cemetary in Buenos Aires. An added bonus of the audiobook is learning the correct pronunciation of words, including a number of very useful phrases in Spanish with local Uruguayan slang. The book is filled with smart tips on how to experience Montevideo as a local and includes helpful information on car hire, bus routes and costs, taxi fares, tipping of car guards and details such as what the different neighbourhoods have to offer. For anyone planning a trip to Uruguay, this guide is a must. I look forward to returning to Uruguay in 2021!

Essential (and interesting!) read for anyone visiting Uruguay

If you are coming to Uruguay for any period time, this book is essential for getting the most out of your visit. Uruguay has so much to offer, but it isn’t the easiest to just walk around and discover on your own. You will definitely miss some gems doing that. There are many restaurants and bars in neighborhoods you wouldn’t just “find yourself in”. This is a perfect download to listen to on your plane ride into the country! Tons of info on history & culture, where to go and what to see, but also very practical info on how to get around. The authors recommendations are local favorites and not on the tourist track. Enjoy!

THE Best Guide for Montevideo!

There is no subject left untouched. Higgs covers not just all the basics but all the important details too. A wonderful guide for a wonderful city. Bienvenidos a Montevideo!