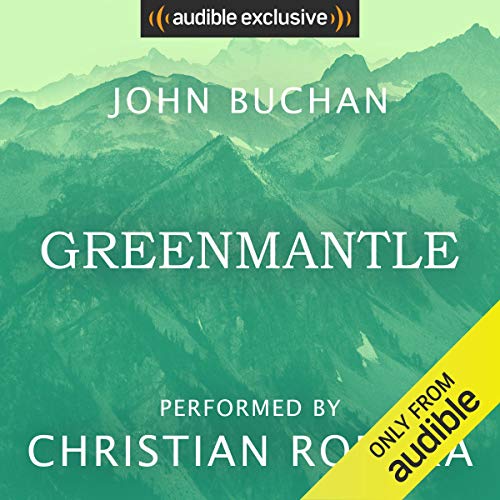 By: John Buchan
Narrated by: Christian Rhodska
Try for $0.00

A worthy sequel to The Thirty Nine Steps and the second of five instalments, Greenmantle sees the return of Richard Hannay as he is sent on a secret mission to weaken Germany's efforts during the First World War.

Accompanied by his trusty sidekicks, Pete Pienaar, John S. Blenkiron and Sandy Arbuthnot, Richard travels across war-torn Europe searching for a man with a secret. A prophet by reputation, the man possesses key information that could guarantee British victory, and he goes by the name of Greenmantle.

In this epic tale, John Buchan ignites our imagination and transports us to an unknown world full of intrigue, suspense and unexpected plot twists. From Germany to Russia and Constantinople, the detectives travel far and wide and encounter some of the greatest literary characters of our time, not least of which is Hilda Von Einem, the evil yet breathtakingly beautiful temptress.

Having been inspired by his own experiences whilst serving in the British army, John Buchan had great success with the Richard Hannay series, which was considered to have the perfect balance between a plausible yet entertaining story.

As well as a celebrated author, Buchan was also a published historian, editor, war correspondent, lawyer, government administrator, MP and director of a publishing house. Clearly an ambitious and intelligent man, his wit, imagination and acumen are easy to detect in the thrilling adventure that is Greenmantle, and we hope that it is enjoyed for many years to come.

Christian Rodska is an English television and voice actor best known for his role in the 1970's series Follyfoot.

From the The Monuments Men and The Eagle of the Ninth to The Likely Lads, Z Cars, The Tomorrow People, Coronation Street, Bergerac and Casualty , his extensive and diverse acting career has led him to become a highly solicited radio and audiobook narrator.

He has now voiced over 150 unabridged audiobooks including Winston Churchill's biographies, Evelyn Waugh's Men at Arms and Sebastian Faulks' A Possible Life. He has been praised for his ability to vary in vocal pace and style and as such, Christian boasts 12 Earphone Awards from Audiofile Magazine.

What listeners say about Greenmantle

I picked this up because Christopher Hitchens references it several times in "Arguably" and I don't have anybody who's recommendations I trust more.

I have enjoyed other works by Buchan and this is also an enjoyable listen. You have to be willing and able to filter through the language and attitudes of a bygone era but in truth they are why it is important that works like this continue to be read. Buchan's stereotypes are all here from questionable "foreigners" to superhuman Scotsmen and crass Americans.

The story is interesting and the moral simplicity of the situations makes it easy for the action to keep rolling along. You know how its going to end before it ever begins and you know who the bad guys are even before they take up their place in the story.

Its Boys Own stuff but good fun for all that. Not as tightly written as "The 39 Steps" but still enjoyable.

I chose this version among many because I usually enjoy Christian Rhodska's narrations. I have to say this is definitely not among his best. The characterisations are occasionally clumsy and often intrusive. One of the characters in particular ended up making me wince every time he spoke. It may well be that I am especially fussy about this but I always feel that if I become aware of the narrator while I'm listening to the story they have failed in their task. Do less. Do less.