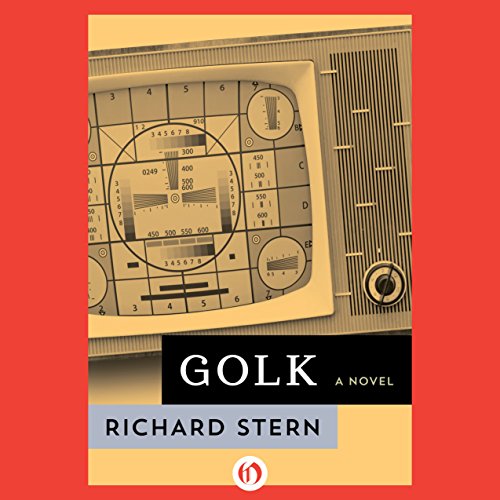 In midcentury America, one man is determined to take over the airwaves with a program as audacious as it is entertaining. Bald, bombastic, and irresistible, Golk is his name and You're on Camera is his show. To "golk" someone is to trick her, on camera, into betraying her true nature. The more combative the personality, the better the joke, and to help trap his victims Golk enlists a team of misfits, including Herbert Hondorp, a scholarly layabout turned photogenic decoy, and Jeanine Hendricks, a 23-year-old debutante with a bitter worldview. But Golk has bigger plans than just catching average Manhattanites unawares. As popular as You're on Camera has become, he knows the show is capable of making a greater, more transformative impact. The question is, will Herbert and Hendricks go along with his revolutionary agenda? Or will they bow to the power of the network and the seduction of celebrity?

Combining high drama with surreal hilarity and presenting a remarkably prescient view of the future of television, Golk ranks with Nathanael West's The Day of the Locust as one of the finest novels ever written about the American entertainment industry.

What made the experience of listening to Golk the most enjoyable?

The story engages the listener with a sense of humor and intelligent writing, and wittiness.

What was one of the most memorable moments of Golk?

The telling of a story of a character trying to find his way under the tutorship of an intelligent persona, a man maybe a bit odd at times, but definitely with ideas and beliefs of how to pull it all together.

Have you listened to any of Alex Hyde White’s other performances before? How does this one compare?

I have enjoyed listening to many works by the narrator. Alex Hyde-White breathes realism and personality into each and every character with a uniqueness and talent. With his ability for tonal change and an expertise of ease, the narrator brings "Golk" to life.

It's the art of relationship between human and media. It's the reality of how media is used to transcend the human condition. But also, it is the story of how life is not always true to media ideal. Characters are kept true to form for the era, and style. This little gem is a listeners delight.