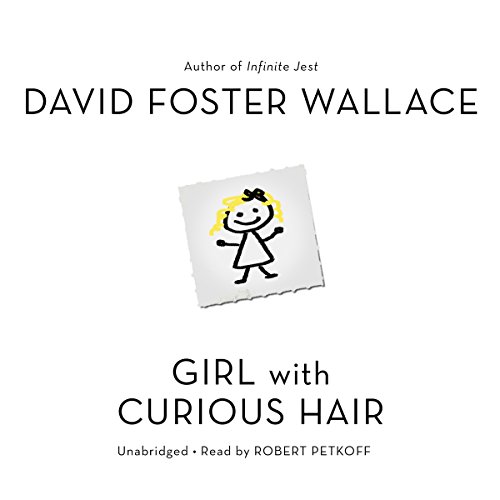 By: David Foster Wallace
Narrated by: Robert Petkoff
Try for $0.00

Available as an audiobook for the first time ever, Girl with Curious Hair is being produced as part of Hachette Audio's ambitious David Foster Wallace audiobook publishing program, joining Brief Interviews with Hideous Men, Consider the Lobster, and This Is Water, and Broom of the System.

Here are remarkable, hilarious, and unsettling re-imaginations of reality by "a dynamic writer of extraordinary talent " (Jennifer Levin, New York Times Book Review). David Foster Wallace was one of the most prodigiously talented and original young writers in recent American history, and Girl with Curious Hair displays the full range of his gifts. From the eerily "real", almost holographic evocations of historical figures like Lyndon Johnson and over-televised game-show hosts and late-night comedians to the title story, in which terminal punk nihilism meets Young Republicanism, Wallace renders the incredible comprehensible, the bizarre normal, the absurd hilarious, and the familiar strange.

What listeners say about Girl with Curious Hair

Would you try another book from David Foster Wallace and/or Robert Petkoff?

Yes,p. I would like to listen to many of these stories again but I can't because the chapters on the audible file don't match up to the beginning of the individual stories

What was one of the most memorable moments of Girl with Curious Hair?

Do you think Girl with Curious Hair needs a follow-up book? Why or why not?

You idiots, this is a short story collection, this question makes it clear that you don't give a damn about the listener experience and that all of the editorial work is done by poorly made algorithims

Some great, Some awful, but bookmark problems

I finally broke down and bought this David Foster Wallace collection because I had read "Lyndon" before and thought it was written by a genius. I still love "Lyndon," and "Little Expressionless Animals," but the title story "Girl With Curious Hair" was awful--and doubly awful because of the way it was performed. So, it's an uneven collection, but worth it for the good pieces.

But please, Audible, improve your bookmarking. I made a number of bookmarks in one of the stories for a class, but then they suddenly disappeared.

No Chapter Headings or Markings

What would have made Girl with Curious Hair better?

When purchasing an Audio book, the absolute minimal thing I would expect is that the Chapters will be marked and numbered. It boggles the mind that the chapters in this book are randomly cut up and organized into different sections making it impossible to skip to the next story easily.

This book is not NOT a Datsun!

This book is not not a Datsun. A couple uneven stories, but all in all a nice early collection of DFW stories.

No way to locate individual stories!!!

What disappointed you about Girl with Curious Hair?

Why on earth didn't you set the tabs at the beginning of each individual story? Do you imagine that listeners are so bovine as to have no opinions about which stories they want to hear, that they'd just as soon listen to all of them with no way of returning to a specific story? Other story collections are set up so you can click forward and go to the next story, so why not this one?? Not a single story begins at the beginning of a tab!! So stupid!!

What was one of the most memorable moments of Girl with Curious Hair?

When I realized they didn't even think that I might want to locate a specific story!!

Think about these things from the consumer's point of view, for God's sake. It's like with Infinite Jest, how you decided readers wouldn't care to hear the invaluable footnotes. But at least there was an argument for that boner. There's no excuse for this.

so good it hurts

Audible, please revise the chapter list for this audiobook so that the stories, which are broken into several parts each, are labeled such that each "chapter" is labeled. This will make it significantly easier to navigate through the stories when I (and others, surely) wish to revisit these short pieces of genius.

genius writing some great description but didn't feel connected to story. I thought the readers hammed it up too much. listened to a couple of stories but returned.

Wallace wrote this early on in his writing career. Even then it was clear his stories, his writing transcended other books/stories.