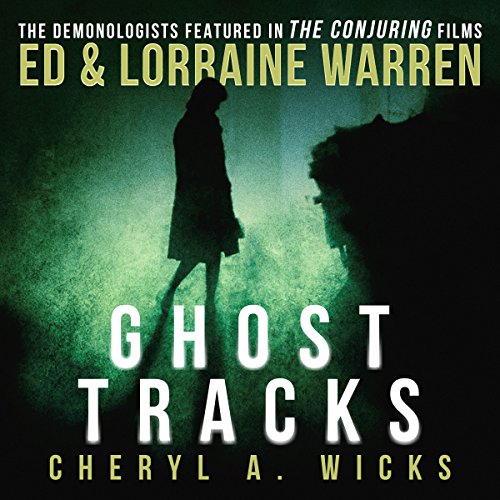 By: Cheryl A. Wicks,Ed Warren,Lorraine Warren
Narrated by: Todd Haberkorn
Free with a 30-day trial

Just beyond the shadows, in the twilight space between life and death, lies the place where ghosts, demons, and otherworldly horrors tread. For most people this place is something to be encountered only in their worst nightmares, but for Ed and Lorraine Warren, it is home. As the founders of the New England Society of Psychic Research, the Warrens are the world's most renowned experts in the paranormal, investigating thousands of supernatural events in their long, spectacular careers. And now, in this remarkable audiobook, their story can finally be told.

From a murdered boy's terrifying unrest to the Amityville Horror, the Warrens use scientific rigor to investigate impossible claims. Like few others, they have an intimate understanding of evil - and a willingness to battle it wherever it rears its head. In the realm of the supernatural, Ed and Lorraine Warren understand that just because something is impossible doesn't mean it isn't true.

What listeners say about Ghost Tracks

If I were to compare it to the most recent 2017 release, that one is better in my opinion. but overall entertaining and informative.

Once again, Todd Haberkorn really knocks it out of the park with his performances of both Ed and Lorraine. It's nice, the consistency, as he has done the other Warren books.

This book is similar to Ghost Hunters, as it's a series of shorter cases mixed in with personal stories, as opposed to one long story. It's broken down into sections with several cases in each section.

I do really enjoy their books. And I love how Haberkorn brings them to life. They feel like real people, as they should, and that makes a difference. You care about them and the people they are helping.

this book disappointed me a bit.

The narrator is OUTSTANDING in all if their books. this was a bit dull. the narrator did hold my interest but it took a while to get through. It still isn't going to stop me from reading the two I have yet to read. The previous ones I read were outstanding. I still would recommend reading this book if your are reading the other books they have on audio . I say reading but it's actually audiobook. this one does have good information on the Warrens. their research and experiences. on a personal level. the LOVE they have for one another. They made a handsome pair. I admire them tremendously. Their love for one another and their sense if humor and strong will. IF YOU Love the Warrens. listen to the book. I just wouldn't start the first book here. I recommend Demonologists to read first for new readers.

great narration, not the best stories

Haberkorn really brings the characters to life. but the final chapters are extremely repetitive. the last two chapters are basically Ed constantly joking about his weight. it doesn't end in a satisfactory way.

As a huge fan of ed and Loraine warren, I loved this book. The narrator is perfect for these kinds of books. Very pleased!!!

The subject matter was great! Mr. Habercorn is an awesome Narrator! I know who is talking at all times due to his voices abili

Just absolutely enjoy these books. I enjoy the encounters and solutions to all of their events. I have all of their books. Just great entertainment.

Narrator makes you feel like you are there, and watching as real life events unfold.

The stories were fascinating, but the reader was top notch!!! I expected there to be several names listed in the reading of this book, but was amazed and surprised to see only one! Would definitely recommend to paranormal buffs or those interested in ghosts and the like 😉

I started this book soon realising that it was a mediocre read. I persevered but it got no better at all.

Unfortunately, through further reading of Ed and Lorrain's books, I have realised that Ed likes to talk, and talk, and talk about himself.

This book is unfortunately boring, unbelievable and lack credibility. I am a paranormal believer having had my own very bad experience. Having read the majority of Warren books I conclude that they are mainly too similar although the story is always different.

I do believe that the Warrens experienced many paranormal events but that they exaggerated these experiences and also used them for self publicity and an income derived from the books.

This particular book is awful and torturous to listen to. Don't waste your money or a credit on this one guys. The Warrens have written other more interesting, thought provoking books.

A book for all Paranormal Fanatics and Sceptics!

The book is amazing, Ed & Lorraine Warren are both exceptional and informative. They are my heroes! The Narrator too is one of the only people to be able to capture every single person in the book and make each person different from the other, a task not many people can actually do. Very entertaining and Frightening at the same time, can't get enough!