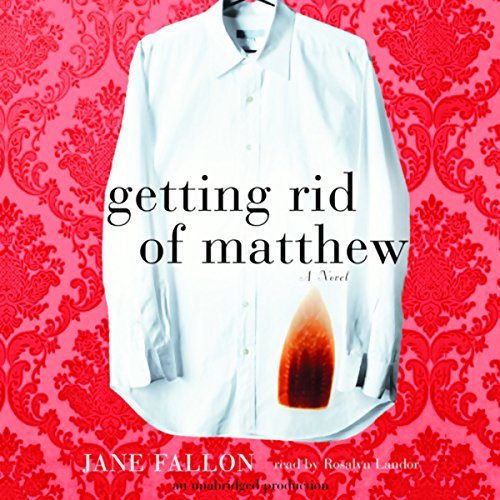 Getting Rid of Matthew

By: Jane Fallon
Narrated by: Rosalyn Landor
Try for $0.00

For once, a novel that isn’t about the heroine getting the guy. It’s about getting rid of the guy, and in the process, finding herself. Helen is nearly 40, and has, for far too long, had an affair with Matthew, a high-powered, much older, attractive, married man who was once, of course, her boss.

After years of being disappointed by missed dates, out-of-the-way restaurants, broken promises, and hushed phone calls, at last Helen realizes it’s time to dump Matthew and get on with her life. This, of course, is the exact moment when Matthew decides to leave his wife for her. He appears on her doorstep and proceeds to move in. Helen then discovers how much she can’t bear him. But she can’t just throw him out - after all, she’s been begging him to do exactly this for years.

The only thing to do, she decides, is to convince his wife, Sophie, to take him back. So after a “chance” meeting in the park, Helen befriends Sophie and hears all about her lying, cheating husband. But then, the unexpected happens - Helen really starts to like Sophie. And then there’s the other small problem of Matthew’s handsome, charming son....

Jane Fallon turns the conventional love story on its head in this irresistibly delicious, ironic debut.

"Brit TV producer Fallon takes 'careful what you wish for' to hilarious heights in her debut novel....The surprising and rewarding treat is a bright, grown-up story of two women who discover friendship and trust in one another." (Publishers Weekly)

What listeners say about Getting Rid of Matthew

Witty and engaging. I reveled in the clever throw-away lines and intricate plot lines that lifted this novel from "mildly amusing" chick lit to "sophisticated and entertaining" chick lit.

Rosalyn Landor's narration, in her distinctively lower-register voice, was flawless and nuanced - her delivery wry - and her pacing perfect.

Highly recommend ... in my opinion, the best of Jane Fallon's books to date.

To quote the movie storyline - A hard-charging publicist's lusty affair with a married man is ruined by his decision to leave his wife and two children for her. She invents a new persona, befriends the spurned wife and attempts to patch up the marriage up so she can be rid of him. In the process, she develops a thing for his oldest son.

Its a fun book - gets you straight into the story but keeps you wanting to find out what happens. Highly recommended

She Jane; She Good!

Jane Fallon entered my life with "The Ugly Sister", another excellent story, and I enjoyed this story even more. Plumbing female emotions and lending the sometimes comedic twists of life is a strength that Ms. Fallon demonstrates well I'm her writing. Of course, I wanted to strangle Matthew who was a legend in his own mind. My only quibble was the voice the narrator employed for Matthew -- it sounded implausible.

What did you love best about Getting Rid of Matthew?

The story was engaging, and I loved every moment of it.

She is always amazing.

Although I read a lot of history and try to keep up with the current bestsellers, sometimes I just want a little "chick lit". This was perfect! The story was pretty funny, and Rosalyn Landor, the narrator, does English girls better than anyone I've heard. The previous reviewer mentioned a lot of cursing, and yes, the "f" word is used frequently, but it's a story about a frustrated 40something and her cheating boss/boyfriend. Of course the main character is going to cuss! It's a funny, easy to listen to read!

Really a good one

I could not put this one down! Very interesting and entertaining.

I did not like characters. I guess I wasn’t supposed to since Helen is a mistress who’s been sleeping with her boss for four years when he decides to leave his family for her. Matthew is the total bump on a log. Hellen’s best friend, Rachel, is a mean smart ass. Nothing, nothing interesting about this book. Every chapter I listened to grated on my nerves. It was so against my values and the characters were so unlike anyone I would invite into my home. I finally realized I did not need to invite them into my home and I stopped listening.

You won't want to put this down and get to work! How Helen manages to pull this off is incredible.

This started out a little slow for me, but picked up quickly and I really liked the book. I don't want to give to much away, but let's just say that the nice guy doesn't always come in last. Definately worth the read. Not really a love stoy, but a journey of hearts.