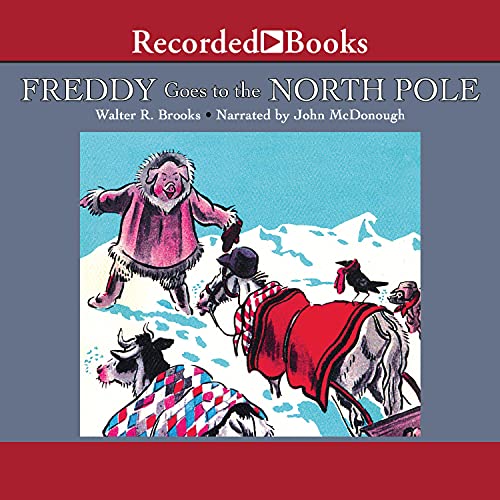 Freddy is certainly an extraordinary pig by all accounts. Although he spends his time oversleeping and overeating just like a normal pig, he also finds the time to daydream, enterprise, and even write poetry! Always full of new ideas, he proposes that the animals of Bean Farm start a tour company.

Promoting himself to president of Barnyard Tours, Inc., Freddy arranges an expedition to the frigid Arctic. Freddy, Jinx the cat, Eeny the mouse, Robert the dog, Charles the Rooster and a host of other animals travel all the way to the North Pole.

Unfortunately, their plans freeze as they encounter a pack of polar problems--but at least they get to visit Santa Claus!

Between 1926 and 1958, Walter R. Brooks wrote 26 books on the adventures of Freddy the Pig. Considered to be one of the greatest characters in American children's literature, Freddy still enjoys enormous popularity today, and his timeless tales are considered to be the American equivalents of the Pooh stories.

A pig for all seasons: listen to more of Freddy the pig's adventures.
©1958 Dorothy R. Brooks (P)2001 Recorded Books, LLC

What listeners say about Freddy Goes to the North Pole

I love it my favorite part was when Ms. Wiggins go trapped on the stairs

Freddy Is the Best!

Totally hilarious story, Santa, sailors, whalers, and all. I love how the Walter Brooks stories help develop my son's grasp on cleverness.

About Freddy the pig. So clever and fun.
John McDonough is a fantastic reader. Highly recommend.

another great classic and performance!

I can't say enough about how great the narrator is for the Freddy the pig books, and the books themselves are so interesting can me and I am 64 years old!

7 year old daughter and I got bored quick

The narrator isn't terrible, but not great either.

The story is just not interesting. It takes way too long for things to start happening, and then the descriptions drag on when something does happen.

It's way too long, we got half way through and gave up on it because it was getting too tedious.

We returned it, I rarely return these books.