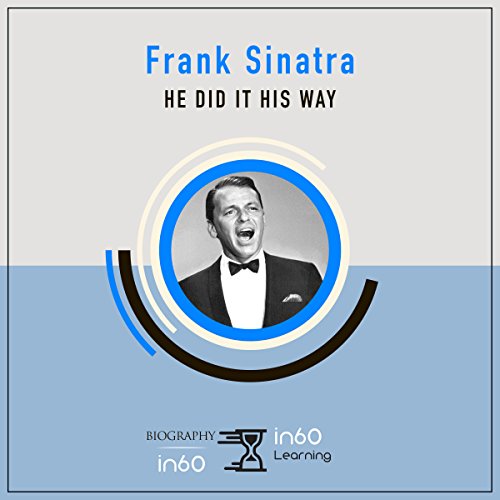 Frank Sinatra: He Did It His Way

Frank Sinatra: He Did It His Way

By: in60Learning
Narrated by: Nick Berman

Frank Sinatra, one of America's most iconic singers, entered the world a child of Italian immigrants living in New Jersey. After his expulsion from high school, Frank taught himself to sing and got his start performing in nightclubs. Sinatra's humble, rough-and-tumble childhood didn't stop him from becoming one of the most successful musicians of the 20th century, however; he sold over 150 million albums in his lifetime.

He conquered the world of music and film both, but he struggled with mental health throughout his life. This biography examines the life of the man who, at the end of his lifelong career, looked back and said, "I did it my way."

So you want a very quick glimpse on a very complicated Star well you have come to the right place.

Through the magic of your electronic gizmo you will learn a bit more then you think you know about the kid from
Jersey.

Thanks to a good freakin Narrator would a pair of good pipes like Franky...... you gonna learn something about
Ol Blue eyes.

I've read many biographies on this luminous star and I still managed to learn something new. This short book details Frank's early years to the end of his amazing career. I was also pleasantly surprised that his children's career's were discussed as well. The well done
narration is also a bonus for this book. I was given a free copy of this book at my request and have voluntarily decided to leave this review.

This brief audiobook does a great job recounting the life of this American legend, starting with his growing up in the blue collar town of Hoboken, New Jersey. The book shares many details on Sinatra's career as a singer and actor. The book also describes Sinatra the person, including his trials and tribulations, including his affairs and failed marriages, health issues and bouts of depression, I was especially impressed with Sinatra's views on civil rights and racial equality-he was certainly well ahead of his time in that regard-and courageous about it, too. This audiobook gives information on Sinatra's children's lives as well.

The narration of this audiobook was just OK-not great, but not awful, either.

Insight into an Icon!

This book gave a very nice look into the life Frank Sinatra. It gave highlights of his childhood to death, listing his many accomplishments and trials. Frank was at the end of his life when I would have taken an interest in history so it was nice to learn of the man I had grown up hearing sing and act, although I had no idea he was as busy as he was! If you are a fan or just want to know an overview of one of the most iconic people in entertainment history then you should check out this book!

A very good short biography of old blue eyes.Nick Berman narrated nicely.I was given this book by the narrator,author or publisher free for an honest review.

All About Ol' Blue Eyes

An interesting narrative that contains details about not only Sinatra's life and career but a brief synopsis of the live and entertainment credits of his three children.well written and comprehensive.

Interesting career but book has a bit of filler

in60 Learning is a great way to quickly learn something about a topic which you know very little. 60 minutes is not enough to give you an in depth look, but it's a cheap and quick way to get an overview and determine if you want to pick up that larger tome about the subject. They are well researched, and densely packed for such a small book. And for that alone, in60 learning books will likely always get my tick.

This book goes through Sinatra's career and life, including his children. About half is just naming albums and songs, particularly the key songs through his career. Some of these I know of, but some I don't and thus the naming of them didnt mean that much to me. It then goes into personality and gives details on who he was and what drove him, rather than just what he produced.

Despite him having a full career and life the book actually fills out its length by also doing quick biographies of his three kids. While interesting, it seems like a stranger filler that could have been used to tell us more about the man himself.

The narration by Nick Berman is good. It is well paced, clear and easy to follow. It is a little hissy/tinny in the background, but nothing too significant.

Really enjoyed this audiobook. My Dad was a huge fan of Frank Sinatra. I enjoy listening to his music because it always makes me think of my Dad. I had no idea of his life outside of what the media wanted us to see. This book was a real eye opener. Nick Berman does a wonderful job of narrating this short but informative book.

I love all the information about Sinatra that was packed into this hour long book. I didn't know a whole lot about Frank Sinatra, the man, before listening to this book. Now, I not only know more about his career as a singer and actor, but I learned some things about the man himself. I was never a big fan of Sinatra but even so, I enjoyed listening to this. This book was given to me for free at my request and I provided this voluntary review.