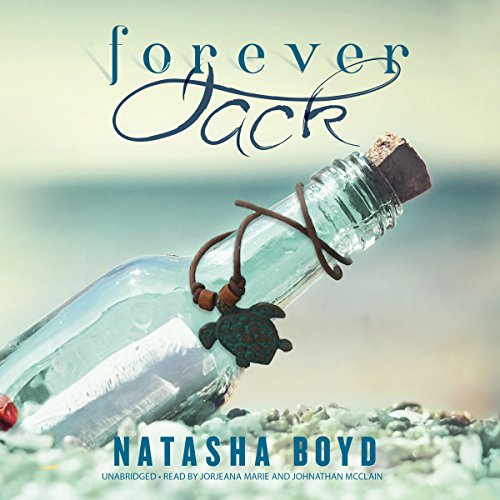 By: Natasha Boyd
Narrated by: Jorjeana Marie,Johnathan McClain
Try for $0.00

A feisty small-town girl and the Hollywood star who broke her heart.

An all-consuming love threatened by fame.

One last chance at forever.

Keri Ann Butler's life changed on the night she met movie star Jack Eversea. She thought she knew a Jack that was very different from the man adored by fans the world over. In the wake of his betrayal and abandonment, Keri Ann has had to pick up and move forward with the life she was supposed to live and has put off far too long.

Suddenly Jack is back, and his explanations for why he left seem more and more plausible - and his declarations more seductive. But being Jack's latest tabloid accessory isn't on Keri Ann's career agenda, no matter how much she is attracted to him. And how can she ever trust him again?

Jack knows he let slip through his fingers the only real thing that ever happened to him. And his hands have been tied to try to stop it - until now.

What listeners say about Forever, Jack

Very good but not necessary. Author could have added this ending to the end of Eversea. This was unnecessary and long. Still loved this couple. Plus no one does better southern narration better than Jorgeana Marie. I could listen to her all day.

I felt compelled to finish the story after book 1 ended so abruptly. However, part 2 was full of drama and angst. Jack was awesome (though the narrator was terrible) but Keri Ann seemed to morph into a different person, She volleyed between being desperately in love with Jack to berating him for events out of his control. Unlike book 1 when Keri Ann was witty and self confident, she became irritating with incessant concerns for her privacy and self worth. I fast forwarded through many sections but, ultimately, I would have done better to just skip it.

Two words paper and pen. What Jack could have easily used to WRITE Kerrie Ann to at least clue her in and EXPLAIN WTF transpired. But that would make too much sense and no filler chapters for lost of the second book! I hate it when a plot does not ring true and not plausible.

I love the first one and this one needed to happen. I did find myself struggling a little bit with Carrie Ann's character, in Eversea, she was the perfect amount of naive and sweet, but she took on a whole new level of annoying in the second book.I loved Jack and his back story, although I can see those elements the author used to keep it realistic so I can't really complain. but being a female I really wanted to slap Carrie Ann sometimes . The narrator's were off the charts amazing.all in all I enjoyed it.

It was a struggle to finish this. I read the first one. D it was OK. This was so drawn out and long and I just kept leaving the room because I didn’t care what happened.

This is the perfect summer read: it’s sweet, easy, and cute. I always enjoy these types of reads. It distracts you from the day to day.

A lot of sex

Predictable story line which is ok for a light read. What is dislike is all the sex scenes. I’m no prude but sex scenes seem a lazy way to fill pages.

This story was a bit long and at times, felt drag. Also wish was a duet style. The story was told mostly by the h. It was a struggle to finish this. The writing and performance was good.

Great ending to a 2-book romance! Though I really didn't enjoy Jazz and the brother. Geez. Still I loved the romance.

wow... I was soooo disappointed to watch the kinky, one self actualized confident FMC devove into a unbelievably selfish, immature, insecure, disgusting human being who has no concept of unconditional love. She completely gave into public opinion,, i.e., her friends and family disapproval. It just ruined the story for me.

Another Natasha Boyd book that I throughly enjoyed

I have loved all of Natasha Boyd’s book read to date, she can explain an emotion so beautiful you can feel like the characters. Cannot get enough.