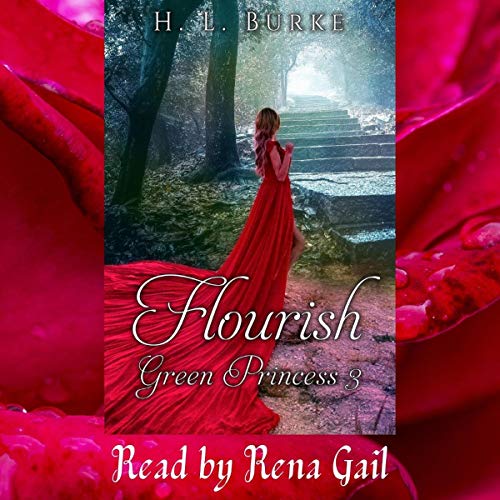 Bryce and Kitrin defied kings and magic to be together. On the eve of happiness, an act of dark magic creates a barrier between them. One too strong even for love to overcome.

A sprung trap separates Bryce from his friends and beloved Kit. Assumed dead by his allies in the flora magi rebellion, he finds himself at the mercy of his closest relative - and greatest enemy - Fire King Langstyn. With foul powers, the heartless king turns Bryce into a weapon against Kit.

Pregnant, alone, and believing her beloved lost forever, vengeance burns within Kit's heart. Langstyn stole the only man she'll ever love. Kit won't rest until he's paid for his crimes.
When the truth of Bryce's captivity reaches her, Kit's torn between standing with the rebel army and sacrificing everything to save her beloved.

The flora magi need her as their leader. Her unborn child needs her care. But Bryce is her heart.What good is victory if it means heartbreak?

What listeners say about Flourish

The twists and turns keep you coming back to see how it ends. Well done. Love the narration.

The Final Chapter of The Green Princess Trilogy!

I have really enjoyed this series! This was a stressful and intense book! I was not happy when the evil new king came up with a horrible plan to separate Bryce from his beloved Kit. The story sucked me in and I could not put it down until the wonderful conclusion that was so much better than I expected it.

Narration was excellent and brought the story to life. I love the multiple voices to represent each character. It is easy to understand who is talking and what is going on.

This author is amazing in developing her characters and creating an interesting and complex magical world.

I absolutely loved the way this author wrapped up the series! Many times I wish authors would give us a glimpse of what the future holds for our main characters. She gave us a glimpse of their happily ever after and more! Great series!

Flourish of a flower

I really enjoyed this book, and look forward to future audibles by this narrator!