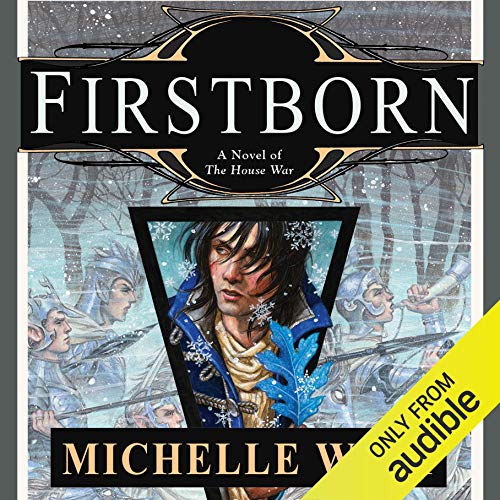 By: Michelle West
Narrated by: Eva Wilhelm
Try for $0.00

The seventh book in the epic fantasy House War series returns to a beloved world of magic and political intrigue, where new threats are stirring.

Jewel ATerafin has never wanted to be a power. What she truly wants, she built in the streets of the poorer holdings. To protect what she built, to protect what she values above all else, she has accepted that power is necessary. But with power comes responsibility.

Jewel has forced herself to do what would have once been unthinkable: She has surrendered her den-kin, Carver, to the wilderness, because she must if she is to have any hope of saving the rest of her family, and the city in which they dwell. But she cannot leave him with nothing.

Into his hands, she has placed the single, blue leaf that came from the wilderness and the dreaming combined. She doesn’t know what it does or what it was meant to do - but it is the most powerful item on her person, and it is the only thing she can leave him.

That leaf, however, was created to serve a purpose that Jewel does not understand. Nor does Carver, who now possesses it. With Ellerson by his side, Carver intends to traverse the wild Winter in an attempt to reach home - and the people who are waiting for him.

There are those who do understand the significance of Carver’s gift, and the disaster that will prevail if it remains in his hands. But time is of the essence. These lands are not unclaimed, and the Lord of these lands is waking from his ancient slumber

Nor is the Lord the only threat. Firstborn, demons, and wild elementals are swirling around two mortal men in a storm that threatens to end the only chance the city of Averalaan has of surviving what is to follow.

What listeners say about Firstborn

I have been a fan of michelle's since sun sword 20 years ago, but I feel (for the past few books in particular) that she lacks a good editor. I love the characters, the complexity of the stories, the environments and ideas she brings life to, but there is a lot of redundancies in the dialogue. (I feel this is even more noticeable listening to the audiobook.) While I am generally not a fan of abridged versions, these stories could be much denser and more dynamic with a good editor.

The three words of the title seem to be the author's favorites for this book. Our main character Jewel spends a lot of time viscerally feeling things, hearing "speaking silences" to her questions and, according to her cats, being "stupid". Jewel is not stupid. Jewel who once was a dynamic and engaging character in "The Hidden City", a character who had agency, has been transformed into a plot device.

One of the most irritating things is that Jewel -- and others -- mention events that occurred in the "The Sword" series. A series not on Audible. The issue becomes that Jewel has essentially remained the same. Yes she's gained titles, she gained some form of power but she's lost all agency. She does not act, she reacts. She is forever that orphaned child despite now being an adult, despite the fact that she's gained so much.

In Ms. West's desperate need to show just how "Stupid" Jewel -- and the the reader -- is, she has exceptionally characters speak in circles, vagueness and partiality. I'm not asking that Jewel be handed everything. I'm asking that if she asks a question we're given at least a semi-straight and complete answer occasionally. The author is so in love with this story telling style that she sucks what could be a tense situation dry of any tension, any believably. Instead of trying to desperately overcome a situation that apparently has killed gods int he past, Jewel and her party spend minutes (if not hours) discussing things that are only partially relevant to the situation. I'm being vague not to frustrate but in an effort not to spoil the scene because some might like it.

there's a point late in the book where Shadow finds Carver. This is frustrating because Shadow knows Jewel is looking for Carver. Instead of the author letting Shadow offer assistance in locating Carver, we spend endless pages of Jewel tramping around and being told how stupid and boring she is. At one time I found the cats interesting, now their just annoying. Especially because none of them work to help Jewel correct her stupidity.

I completely disapprove of Jarvin's plot line. Again I won't detail it to avoid spoil it for those that might enjoy it.

As always a fantastic story and narrator pairing.

Eva Wilhelm does an impressive job delivering the fantastic vision of Michelle West/Sagara flawlessly. Ms. Wilhelm's ability to bring forth the many voices and diverse personalities is at times awe inspiring. The story itself is fantastic, bitter sweet, and moving. Full of dramatic intrigue, comedic moments, and all the things that make a story worthwhile. Prepare yourself for a true vision of the past, present and future of this amazing world, and brace yourself for the epilogue, it's a knife in the heart, will bring tears to your eyes, all while lighting the kindle of hope in your soul for what's coming in the next book.

Loved the story and the narrator was great. I can't wait to read the final book.

Really like the story! Can't wait for the next book. I hope we don't have to wait too long!