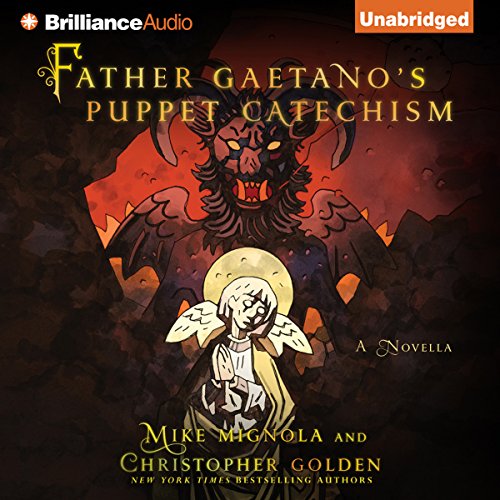 In the aftermath of a critical World War II battle, Father Gaetano is assigned as the sole priest at the Church of San Domenico in the small seaside Sicilian village of Tringale. The previous pastor has died and there is a shortage of clergy at the moment, so until another can be spared, the young priest must say all of the masses himself.

Mass is not Father Gaetano’s only responsibility, however. The war has created many orphans, and thus the San Domenico rectory has been converted into an orphanage that is also his domain. The children are a joy to him, but they have lost so much, many have begun to question their faith and their God, and his attempts to teach them catechism are in vain...until he finds an old puppet theater and an ornate box of puppets in the basement.

Handcrafted by the building’s former caretaker, now absent, the puppets seem the perfect tool to get the children to pay attention to their lessons. But after dark the puppets emerge from that ornate box, without their strings. Whereas the children have been questioning their faith, the puppets believe Father Gaetano’s Bible stories completely. Yet there is such a thing as too much faith. And the children’s lives will never be the same again.

This was a short book; the title itself names it as a novella. For me, short books need to have a tight story line. I believe that a book loses its cohesiveness when multiple arcs are brought into play. I think that this was a flaw in FGPC. On the one hand this is a book about puppets that come to life after dark and on the other it is quite, I believe, tangentially about Father Gaetano’s temptation with a nun in the story. Was there a connection? I never found one.

I thought there were parts of the book that were marvelously written but the majority was rather dry. Was the book just too short to support these multiple arcs? Frankly, I think that it was just too long and unimaginative to hold my interest.

I am a long time fan of Hellboy, but I was hesitant to follow Mike Mignola away from comics. However, I’m pleased to report that one of my favorite artists remains great regardless of the medium. Taking the plunge into this was a very rewarding experience and I will certainly be continuing on the Mignola and Golden’s next collaboration, Joe Golem and the Drowned City, as my next read.

In this story, Mignola and Golden have crafted a deeply moving, and surprisingly scary, tale about a kind hearted priest struggling to preach the Catholic faith to war orphans in the midst of WW2 Sicily. Because this is a very short read I can’t delve into further details, but the payoff at the end packs one hell of a punch (pun totally intended). The narration is nothing special, but it gets the message across and certainly comes to life near the end (another pun you’ll understand later on). Very highly recommended!