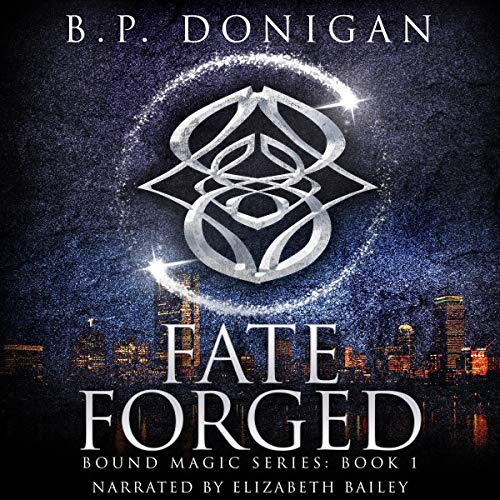 By: B.P. Donigan
Narrated by: Elizabeth Bailey
Try for $0.00

"Some worldbuilding details are given short shrift by the fast pace, but there’s a lot here for readers of Seanan McGuire and Patricia Briggs." (Publishers Weekly)

Maeve O’Neill grew a hard shell while growing up on the streets of Boston. Just as she’s on the cusp of getting her life on a better track, she starts having agonizing visions of torture. Desperate to rid her mind of the awful scenes, she follows her visions to the scene of a murder. Instead of answers, she gets an unexpected gift from the victim: Magic.

Maeve’s newfound abilities soon make her the target of two powerful and dangerous groups, the Council and the Brotherhood, both of which will stop at nothing to gain the magic locked inside her. In an attempt to stay alive, Maeve strikes a deal with the Council’s disillusioned enforcer, Silas Valeron. His motives are suspect, and his arrogance is frustrating, but his plan might work.

With more visions sending Maeve deep into a world of magic with enemies all around her, she must learn to control her powers long enough to get rid of them. If she can’t, all of Earth’s magic could fall into the wrong hands.

What listeners say about Fate Forged

This is by far the best book I've listened to (or read) is ages. The narrator's voice took a little bit to get used to, but that didn't detract from the story. Fate Forged is a fast paced fantasy with brilliant world-building, a unique twist on magic and paranormal creatures, a kickass heroine and swoony hero. The perfect amount of fiery banter between Silas and Maeve, teamed with their slow burn romance had me listening to this book at any opportunity. Let's just say I can't wait for more of these two! I'm eagerly awaiting the next instalment in this amazing debut series. Well done!

I first want to say that I was given this free review copy audiobook at my request and have voluntarily left this review. Now that the legal stuff is out of the way I want to say that this book was really enjoyable to read. While I think that the performance left much to be desired, overall this book was an enjoyable escape from the standard urban fantasy story. On the positive side (and I don't want to give anything away so I will be vague) I will say that this book had some interesting and possibly risky turns that a more established author might not try to use. Some of the literary risks this author took paid off in a big way and led to a pretty original storyline. One of the bigger gambles present in the book was the first person perspective. I have found that too often first person narratives seems to be just a list of facts and arguments and less of a fully developed story, Given this, the main character's narrations felt genuine and her internal dialogue usually added to the narrative rather then distracting from it.
On the opposite end, there were times when I personally felt that a characters reaction to a situation seems a little over or under stated. I believe this partially was an artifact of the performance, but still. In particular, the reactions of the narrator herself sometimes seemed excruciatingly described while at other times were just blind decisions. I will also say that the pacing of the story overall seemed to be inconsistent. In some parts time seemed to fly by with nothing happening while other times we were given a minute by minute guide. Neither of these are really all that big of a problem and I believe that as this author continues to develop their own literary voice they will naturally fix themselves.
To conclude, I would recommend this book if you are looking for something a little different. You will have to be patient with the reader as she isn't the best, but if you give the book a chance it is well worth the credit. I am personally looking forward to following this series and watch as this author continues to refine their craft.

This is not my typical genre but I decided to give this book a go. I’m so glad I did! I loved the character development and found myself connected to the characters very quickly. The story never went as expected and had many exciting plot twist. Such creative writing! I recommend this book for people looking for an exciting and romantic fantasy read.

A Fantastic Intro to Urban Fantasy

I purchased a copy of this book on Kindle. I received a free copy on Audible and am providing my honest review.

Story: I had never read or listened to urban fantasy, so I arrived at this book without comparisons or expectations. I’ll leave the general premise to other reviewers. My take: Maeve is a badass—she is consistently self-aware, motivated to help others, and realistically flawed. The author uses a spectrum of empathy among the characters to show us how and in what ways Maeve establishes relationships. Besides its obvious power in the story, magic cleverly represents emotions and physical intimacy between those that time, or other barriers, keep separated. The story provides commentary on classism, love, trauma, and family—with a backdrop of sword fights, mystery, magical tattoos, alternate worlds, and even an Alaskan glacier! I’m excited about book two!

Performance: Things get a lot more subjective when you are listening to a book. The voices and concepts inside your own head don't always match how someone else interprets and narrates them. In this case, the reader introduced a YA element to the story that I didn't hear on my own and I had a difficult time reconciling my concept of Maeve as a badass with the sweetness and naivety of her voice through the narrator. I appreciated the energy and emotion of the reader, but I would love to hear more snark and grittiness come through for the main character.