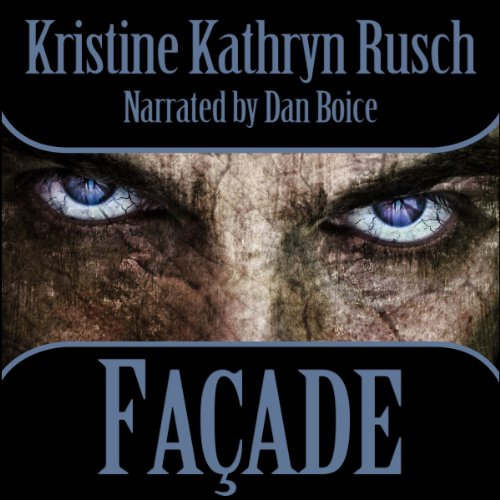 By: Kristine Kathryn Rusch
Narrated by: Dan Boice
Try for $0.00

Thomas fell in love with the Oregon Coast while filming his signature role as Anthony Short. Then his estranged daughter, Heather, died there, and Thomas fled.

He's returned now, not to solve his daughter's murder, but to see if he can live with himself and his past.

Only someone leaves mysterious notes, signed Your Daughter, and birds die on his porch. Strangers report a man in a cloak who looks just like Thomas, but the fans who follow him everywhere don't see anyone.

But Thomas knows something strange is going on. Then more people die and Thomas realizes he holds the key to it all. He can solve the crisis, if he only dares...

What listeners say about Facade

I read this twice

I read this book twice to see if I missed anything because the ending was too abrupt and unsatisfying. Not Ms Rusch's best.

As others have noted, the main character, Thomas, is an egotistical and unlikeable person. He is an actor with a troubled past and a traumatic childhood. His mother never really loved him, his father molested and later killed Thomas' sister. He spent time in a series of foster homes. So, I don't hold it against him that he is not very likeable.

Thomas buys a house in a seaside village where a show he was in was filmed but he doesn't remember the village much because of drugs he was doing while filming. But some of the villagers remember him--not favorably. A woman had been killed in the house some years before. After a bit, Thomas' daughter visits him and is killed. The death remains unsolved--until the very end of this book.

Some time later, Thomas breaks his leg during the filming of the tv series in which he is starring and returns to the house to recuperate. He has a heavy cast and must use crutches. Birds are killed and nailed to his door, he receives notes from his dead daughter and women begin dying in gruesome ways. Thomas is not a suspect because he can hardly hobble around, although people report seeing a man much like him in the costume Thomas wears on set in the show.

Then, in a very sudden ending, it turns out that the killer is some sort of split-off energy alter ego of Thomas' and kills for some reason we never learn. They fight, merge back into one being and roll off a cliff. And that's it.

Ms Rusch's "Retrieval Artist" series is MUCH superior. I have all of those and enjoy them. If you have not read them and are starting off with this book, don't let this one put you off. Fortunately, I started off with the "Retrieval Artist" series, or I may have been tempted to pass on her other books if I had read only Facade--the book is actually not bad until the ending, which is just too inexplicable. I suspected the killer would be some version of Thomas, somehow, but the denoument is unsatisfyingly written.

The narration is good. The editing pretty good, although once or twice a line is repeated from where narration paused and restarted, but not too distracting.

If you like her Retriever stories you will love this one too. It takes a chapter to start to figure our what's going on and then the suspense builds and the mystery unfolds. Wonderful narration adds to the atmosphere.

Someone with no imagination.

Would you ever listen to anything by Kristine Kathryn Rusch again?

What character would you cut from Facade?

I knew what was going on from the 4th chapter. The ending was bad and expected. The book is mired in details. He doesn't just leave the house, he puts on his shoes, finds his keys, locks the door, walks down the steps, gets into the car yadda yadda yadda. It was all bread and no meat. I won't read this author again.