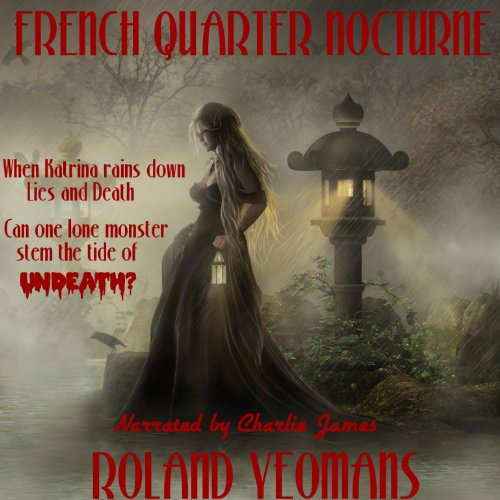 By: Roland Yeomans
Narrated by: Charlie James
Try for $0.00

Long before man. Long before light. Darkness reigned. Then, light pierced its flesh. It hates the light. Even moreso, it hates man who casts light like a garment over this world.

A man with the blood of death in his veins. A revenant priest. Both thought their lives couldn't get any worse. Hurricane Katrina proved them both wrong.

In the French Quarter, the last thing the setting sun sees is the transformation of St. Peter Street to the cursed Rue La Mort. At the corner where it clashes with Royal Street, the jazz club, Meilori's, shimmers into being for all the children of the night to behold. It is the Crossroads of Worlds. Within lies hallways leading to realms long thought myths.

Outside the club stands a being from beyond time itself, waiting for his chance to extinguish all light, wrapping comforting darkness around himself like a womb once more.

Meilori's owner, the man with the blood of death in his veins, is the gatekeeper there along with his best friend, a revenant priest.

During the month following Hurricane Katrina, the shadowlanders that the owner has kept restrained are unleashed. And the being from outside time knows his chance has come at long last.

Against the backdrop of Katrina's aftermath, an agnostic jazz club owner and his best friend, a haunted priest, engage enemies in the shadows that challenge both their belief systems. But there are two things not in doubt: their deep friendship for one another and the dark threat given license to kill by the absence of the police.

Samuel McCord is the owner of the jazz club Meilori's, a place in which almost anything is likely to happen and in which almost everything has. He tries to live with the loss of his beloved wife while struggling against political incompetence and intrusions by the Russian Mob, European revenants, and an old enemy seeking final revenge.

Father Renfield tries to maintain his doubt-ridden faith under the twin barrage of his friend's questions and the overwhelming needs of Katrina's survivors.

The chaos in New Orleans has given the European revenants a chance to establish a beachhead in America.

Worse, McCord's life-long enemy, a man who insists on being called DayStar, is plotting in the shadows. Gifted with a cruel intellect that makes Hannibal Lector look like a choir boy, DayStar has always been able to outwit McCord.

But Sam's instincts tell him that if he is outwitted this time, all of New Orleans will suffer for his failure.