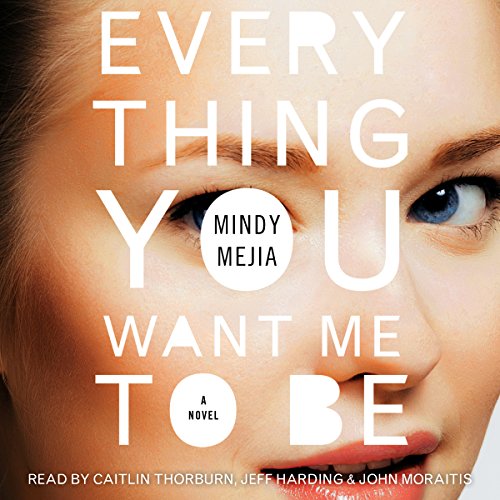 Everything You Want Me to Be

Full of twists and turns, Everything You Want Me to Be reconstructs a year in the life of a dangerously mesmerizing young woman, during which a small town's darkest secrets come to the forefront, and she inches closer and closer to her death.

High school senior Hattie Hoffman has spent her whole life playing many parts: the good student, the good daughter, the good citizen. When she's found brutally stabbed to death on the opening night of her high school play, the tragedy rips through the fabric of her small-town community. Local sheriff Del Goodman, a family friend of the Hoffmans, vows to find her killer, but trying to solve her murder yields more questions than answers. It seems that Hattie's acting talents ran far beyond the stage.

Told from three points of view - Del, Hattie, and the new English teacher whose marriage is crumbling - Everything You Want Me to Be weaves the story of Hattie's last school year and the events that drew her ever closer to her death.

Evocative and razor sharp, Everything You Want Me to Be challenges you to test the lines between innocence and culpability, identity and deception. Does love lead to self-discovery - or destruction?

What listeners say about Everything You Want Me to Be

Good Story with One Terrible Narrator

I would! I enjoyed it. I think comparisons to Paula Hawkins and Gillian Flynn are a bit of a stretch. It's a good book, but it's not "the next Gone Girl" or whatever.

I would definitely recommend this to someone else from Minnesota. I think being Minnesotan makes for increased enjoyment of this book.

It's not that kind of thriller. You know Hattie dies, and the book is about unraveling how and whodunnit. So no, I was not on the edge of my seat, but I was interested enough to keep at it despite how much I disliked 1 of the 3 narrators.

Caitlin Thorburn: sweet, clear, charming. She sounds like a young girl and does a good job when she does Portia's voice, too. However, she mispronounced "pho," "Guthrie," and several other words. Man, if you're narrating a book about Minnesota, look up how to pronounce "Guthrie." It's not hard.

Jeff Harding: gruff, deliberate, middling. His cadence seems a little forced at times, but it works for the character, so it didn't bother me.

John Moraitis: wrong, warbly, arrhythmic. I do not understand why this narrator was cast to play a young Minneapolis man named Peter Lund. Moraitis sounds like he has a speech impediment around his Rs and Ls, and his cadence is really off-putting. It sounds like he doesn't know what he's reading until he gets to the word, and then he has to carefully move his mouth around the words. I'm not sure how else to describe it. I dislike it so much that I almost returned the book after listening to him for 2 minutes. The story was enough to keep me invested and I just gritted my teeth to get through it.

No? Who on earth would sit and listen to a book for nearly 12 hours in one sitting?

I wish I'd read it, not listened to it. I think the narration is making me enjoy this book far less than I would have had I actually read it.

Too bad about lackluster narration

This story has potential but lost me due to really quite cheesy and overdone male narrators, and the other, better parts of the book couldn't overcome it. Better one to read in paper form.

I'm enjoying the book but am writing my first review based on two terrible narrators. I'm losing count of the number of words Caitlin Thornburn has mispronounced--as another reviewer noted, what theater geek in Minnesota wouldn't know how to pronounce Guthrie? Cholera, LaGuardia, Gustafson (a common surname in the Upper Midwest)--all mispronounced and took me out of the story. Then she gives employees at the Minneapolis airport Southern accents. What? Is anyone paying attention? John Moraitis sounds like he belongs in Brooklyn not Minnesota, and pauses in weird places. Why no attempt at Minnesota accents? Very disappointed in the narration of this book (although Jeff Harding is good).

I've never done a review here before but the narration of this book is so bad I had to say something. Caitlin Thorburn pronounces many places and cities in Minnesota incorrectly. She also gives SOUTHERN accents to a number of MN characters.
The man reading the part of the detective does all of the female voices as if the women were horrible, nagging harpies. Honestly, it's sexist and offensive.
The man reading the part of the teacher has a speech impediment and sounds about 30 years older than he should.
The narration really took me out of the story. I almost didn't finish it.

Like many others have mentioned- the narration on this was not great. I am from Minnesota/Twin Cities - so the butchered and bizarre accents and pronunciations made it difficult to stay in the story. As others have said - the narrator for Peter sounded much too old, and for some reason the narrator for Del sounded like he was doing a southern accent - I believe it was an attempt at sounding folksy. Bottom line - read this one instead of listening - especially if you are from Minnesota.

The story was fine, but what the heck was with the readers? Why the unneeded pauses in every sentence? Don’t even get me started on the strange version of midwestern accents. It really ruined what could’ve been a mediocre experience and made it laughable.

I could have loved this book.

I could have loved this book if only the narration didn't make me cringe. Why did a teacher, supposedly younger, sound middle aged? Also, please learn how to pronounce "OB/GYN". Seriously, pull aside a woman (any woman) and have her help you with the pronunciation.

The story is very good! Mispronunciation of words and strange choices of accent by narrators was distracting.

Book was good, but it was more a story about the characters lives , than a fast paced psychological thriller. I like fast page turner books that I can't wait to get back too, so although the story was okay, just more fiction of a towns people's dramatic year than a thriller.

Got better as it developed

Where does Everything You Want Me to Be rank among all the audiobooks you’ve listened to so far?

I didn't much like the characters in the beginning, but it got better and better. Jumping between characters and timeframes does not usually appeal to me, but this really worked.

The Jeff Harding character will always be my favourite. He is such a great narrator who only seems to do westerns these days.