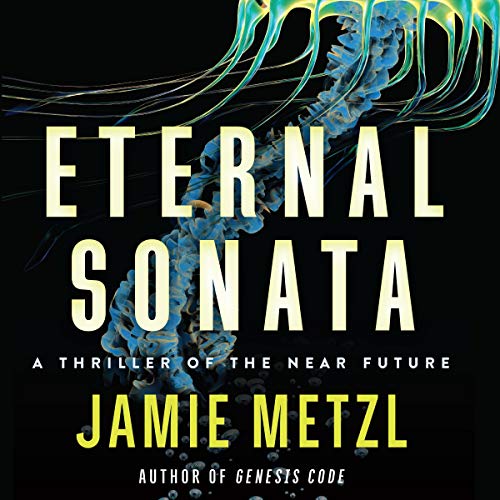 By: Jamie Metzl
Narrated by: James Anderson Foster
Try for $0.00

A few dead bodies are a small price to pay in the quest for immortality.

In 2025 America, it's hardly news when a renowned octogenarian scientist dying of cancer disappears from a local hospice, but when Kansas City Star reporter Rich Azadian begins to dig, he discovers that other elderly scientists around the world have also vanished recently - all terminally ill and receiving the same experimental treatment from a global health company. His investigation leads him to the reclusive Noam Heller, a brilliant researcher exploring new technologies to reverse-age cancer and other cells. Using revolutionary stem cell treatments and snippets of DNA from rare, immortal Arctic jellyfish, his breakthrough promises the genetic equivalent of the fountain of youth.

But when Heller is murdered and his lab destroyed, Rich and his girlfriend Antonia become targets themselves. With the local police and federal authorities failing to see the big picture, he realizes he must take matters into his own hands to survive and stop the killing. His only hope is to mobilize his network of brilliant misfits and infiltrate the vast and lethal race - among cutthroat corporations, national intelligence services, rogue scientists, and a mysterious international organization - to control the new technologies and perhaps the secret of life itself.

What listeners say about Eternal Sonata

this one has all the ingredients for success

Set in a near future, an octogenarian scientist dying of cancer is suddenly missing from the nursing home where he is. The police are not making great efforts in trying to find him, but this case catches the eye of Rick Azadian, a reporter for the local newspaper. While investigating this case, Rich discovers other elderly people missing in similar circumstances: old, in advanced stages of cancer, and with some level of dementia. Piecing things together, Rick realizes that the disappearances are related to cancer research, and the sneaky Noam Heller may have some answers. But somebody doesn't want the truth to see the light, and Heller, Rich, and his girlfriend will become the targets in a dangerous game.

I always enjoy a good technothriller, and this one has all the ingredients for success: a catchy story, interesting characters, some degree of science, and a good writing. The book trapped me from the start with the intrigue about the missing people. The premises were well set, and it was impossible not to want to know more. I found this book, and especially the first half, to be a page-turner.

Sometimes in technothriller, I get confused when there are many one dimensional characters. Rich and Antonia are quite the opposite. They are interesting, and their story feels real. The interaction with other characters is also quite fluid, and the dialogs feel natural. Sometimes I have issues connecting to characters in thrillers, but this is not the case. I cared about Rich, and especially about Antonia.

There is some 'plausible' science in this story, and this is one of the keys of this book. I am not saying that the science could be real, but the hypothesis made sense for people not really into biology and genetics.

The writing was good, making the story flow, and keeping my attention. I had the impression that it dragged a bit towards the end, but it could be that I was really impatient for knowing the outcome.

The subject of eternal life is an interesting one, especially because in this story, there is a particular toll associated with it. It is an interesting point of view, and quite original I must say. This is one of those books that make you think what things could be worth it, or what limits one would be willing to reach.

I really enjoyed James Anderson Foster's soothing narration. I had troubles to distinguish the characters on a couple of occasions, but the book is in general well written so that this doesn't often occur. His character interpretations were quite expressive and emotional, and despite a couple of times I got confused with the characters, it was a very well done job. The audio production was spotless.

I would recommend this book to anyone who would enjoy a good technothriller, not only with a good story but also with great characters.

Audiobook was purchased for review by ABR.

Well done. keeps you interested and is intelligent without being boring. makes you think about what the future holds. now I need to read Genisis Code.

I was interested in this story when I heard an interview with the author, but the story is pretty terrible. First-person mystery/conspiracy was a poor format choice. I could not suspend disbelief. If you're in it for just the tech
futurism then you'll probably enjoy it.