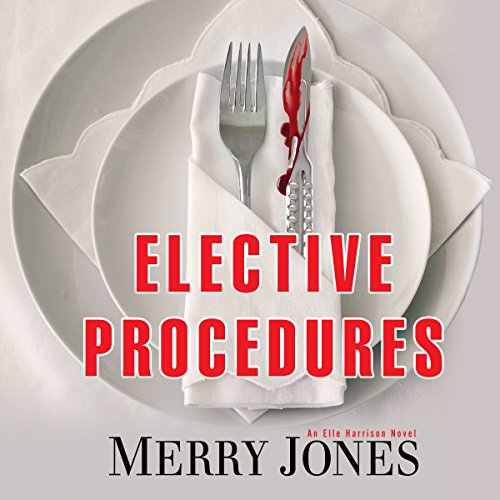 By: Merry Jones
Narrated by: Cindy Piller
Try for $0.00

Elle Harrison is back! She and her pals Jen, Becky, and Susan travel to Mexico where Jen has arranged cosmetic surgery, after which she will recover in a plush hotel suite. But more is going on at the hotel than tummy tucks. Soon after they arrive, Elle sees the woman in the suite next door fall from her sixth floor balcony. When the room is later occupied by another patient, Elle finds her brutally mutilated body on that same balcony. Police question Elle as the last person to see these women alive. Their doctor also takes an interest in Elle; a woman staying at the hotel asks Elle to help her fend off a creepy stalker; a veiled woman sneaks into Elle's suite at night; and her late husband, Charlie, reappears (or Elle imagines that he does) when Elle gets pushed under water in the ocean and nearly drowns. As dangers swirl and intensify, Elle is forced to face her unresolved issues with Charlie, even as she races to find the connections between killings before more patients - including Jen - can be murdered. And before she herself becomes prey.

What listeners say about Elective Procedures

My Review
The story begins in Mexico where we discover Elle in a very dangerous, perilous predicament, we then flash back to several days prior to the trip, Becky and Elle are on their way to a girls night out, Becky has the hankering to consult with a fortune teller who tells her she is about to meet her special man. Against her better judgement, Elle was persuaded to also have a reading where she was given a strange but vague forecast:
"If you are wise, you will protect yourself", Elle immediately assumes the fortune teller is referring to the dead.
"You are stronger than you think, this is why they come to you"
Back to Mexico, where, as the blurb tells us, Jen has undergone her plastic surgery, despite having a private nurse to attend her, she constantly calls upon her friends to pander to her real and imagined needs. Jen is a bit of a fool, or else her surgeon omitted to gain an informed consent because she seems to have had no idea that undergoing invasive surgery, by its very nature, involves a degree of post operative discomfort. She does not suffer it well and there are some amusing passages involving her petulant demands and the begrudging responses of her friends!
The scenario set, the story then takes us back to the opening passage of the book, which, as it turns out, is Elles' attempt to save the life of the female stranger in the adjoining hotel room, a failed attempt. The woman's death quickly turns in to a police inquiry, where Elles explanation of the sequence of events is viewed as being an unlikely story by the investigating officer. Many strange occurrences follow, she can't help but recall the fortune tellers prediction. Sometimes it seems easy to believe that Elle is, indeed, quite mad, she has conversations with her dead ex husband (who is, as it happens, quite the voice of reason). She reports some strange goings on, both to her friends and to the police,which are always disproved or discredited to the point where even she wonders what is real.
Amidst all the mystery, Elle finds herself attracted to a very handsome fella, Jens' surgeon, and he gives every indication that she is very special to him, yet Elles' lack of self esteem prevents her from believing his feelings are genuine. Meanwhile, Becky, having found her dream man is getting on everyone's nerves by vacillating between her euphoria and her fears of losing him.
This story has many layers, many threads, A little humour, a nod to the paranormal, romance, moments of trepidation and, of course, mystery. I didn't, however, feel much affinity for Elle, some of her actions seemed out of sync with her character as I understood it. She certainly made some unexpected, not to say slightly improbable moves, to be truthful, I'm not sure I really liked her all that much. The group of girls worked well I thought, with their differing characteristics and, despite their little squabbles, all came through for each other, just as friends do. I'd be happy to read more of their adventures.
Narrator
Read by Cindy Pillar who I have previously had the pleasure of listening to. I said "read" but Cindy is more than a reader, she knows how to tell a tale and, as such, does any author the huge favour of making the best of the characters. She has a pleasing, easy to listen to voice, excellent characterisations, I particularly enjoyed our petulant patient, Jen. Cindy does a good creepy and chilling too!
This audiobook was provided by the publisher, author or narrator in return for an honest review

I wish I hadn't bothered

Cardboard cut-out characters and a plot that grew more ridiculous by the chapter made it very difficult to enjoy this.
Very disappointing. I wish I hadn't bothered. I certainly won't be looking for more by this author,
The only saving grace was the narration. Cindy Piller has a pleasant voice and is easy to listen to, but even she can't do too much to help this book along. I'm afraid.

Would you listen to Elective Procedures again? Why?

Yes, knowing how it ends you can then realize there are more hints, or clues that you might not have realized. Love to do that and will listen to it again soon. Great ending.

Jen, because she was the one who got the elective procedures.

She is a good reader of the dialogue.

This reader did a great job of staying fresh even as the story got more and more ridiculous and as the main character continued to ask herself dumb questions. Very thin plot and no development for the cardboard characters. That said - the reader has a very good voice and kept the material fresh all the way to the end.

Has Elective Procedures turned you off from other books in this genre?

I don't know what the genre is - chick lit suspense?

She kept the material fresh and sounded at the end as interested as she was at the beginning. If I had been reading, I'd have probably quit about 25% of the way in.

Other than a good reader, no.