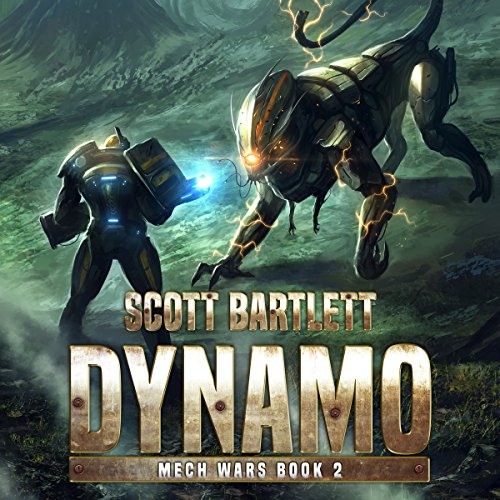 By: Scott Bartlett
Narrated by: Mark Boyett
Try for $0.00

The human body is no longer enough. The wars of the future will be fought with mechs.

Chief Roach's victory over the ferocious Quatro won't last long, it seems. Strange meteorites have fallen to the surface of Eresos, containing mechs - quadruped mechs, clearly designed for the enemy.

Now, Roach and the surviving members of Oneiri Team, must escort these fearsome new weapons through a harsh alien wilderness, while defending against constant attack.

If the quad mechs fall into the enemy's possession before Roach can get them to the space elevator, humanity will lose the advantage granted by their own MIMAS mechs, and they'll be right back to where they were: outmatched and overpowered by the murderous alien beasts.

What listeners say about Dynamo

And he does it again.

Once again I've no words do describe this amazing masterpiece.
Perfect preference.
Writing with such beauty that if it only reached Hollywood it could and would be the next Star Wars.
It took the great science-fiction writers many years and many short stories without the competition of thousands of writers today to get to where they are now and here is a writer which have actually done exactly that.
Perfect creation with all the competition in such a short time.
Recommend to follow this author, everything he writes turns to gold!

What disappointed you about Dynamo?

It's flat, not quite as bad as book one but gave up half way through it.

What was most disappointing about Scott Bartlett’s story?

I love this type of book, but Scott Bartlett is in it strictly for the money. The story and the scenes would just get going when they would stop short of reaching their potential.

The book was only 5.5 hours long and I only listened to half of it. It probably came after I quit.

The follow up to Powered, Dynamo was an incredible listen. Once again both author and narrator blow it out of the water. The second part of the mech wars series was just as good as the first even expanding on certain characters and driving the plot and politics forward. Memorable characters, incredible confrontations and continuing twists. If you love science fiction, aliens, mechs this is a must have. Looking forward to more.

As with most of Scott Bartlett’s work there are usually two or three concurrent plots running through the book.

There is a sinister connection between Darkstream and Daybreak. We are also introduced to another merc faction that is armed in Darkstream Dark Tech.

Continuing the saga our heroes are forced to defend Habitat 2, we begin to see the deceit of Darkstream.

Our MIMAS heroes are forced to battle a number of Quattro in their MIMAS-style mechs.

And we follow Price’s father discover a secret so dark it could cost him his life.

This is the second book in the Mech Wars series, and it was quite enjoyable. The same cast from the first book is back, along with a few new characters. The overall story continues to progress, while we get a good bit of action on both sides. I will continue this series.

Disclaimer: I was given this free review copy audiobook at my request and have voluntarily left this review.

Give me more!!!! This is an Amazing Mech story and Narration. Scott and Mark have created a wonder teaming of writing and narration, that truly brings you into the battle. I am excited to start book 3.

Note at the time of this review Audible did not have chapter titles for this title.

This book was provided free for review, however, these are my honest opinions and review.

Again, Mark delivers a fantastic read to an outstanding book and Scott delivers the action and intrigue as Jake and his team struggle with battle after intense battle.

Aliens vs Mechs- the battle continues

Written by: Scott Bartlett
Narrated by: Mark Boyett
This is an audible book I requested and the review is voluntary.
I loved the first book and when I was given the chance for book 2, boy did I jump on that! This is a is a great sci-fi series with soldiers using giant suits that are armored and engineered to be top-of-the-line battle ready and tech operated. There are aliens using similar suits too. There are other issues going on like a corrupt government, drug rings, species extermination, and so much more. Very intense series. The characters are very well developed. You hate some and adore others. Some are fooled and other naive. Some are just evil. Wonderful world building also.
The narrator is the same as the last book that really helps and he does just as good and keeps up with the same voices which can't be an easy feat. There are soooo many voices and aliens. He meets the job brilliantly. Wonderful!

Awesome with a capital A!!

This books was awesome with a capital A!! I couldn't stop listening, it had me hooked from the first sentence. If you love mech stories, buy this one!

Absolutely would if they are into Sci Fi. It's good solid sci fi.

The none stop action interspersed with Dark Stream intrigue.

I really don't know so many good scenes and moments

The narration is excellent .I received a free copy of this book in exchange for an Honest review.

This book continues the adventure of a group of mech pilots as they struggle to stay alive in an environment that is hostile toward them. The members of the team have their own issue to work through and you feel each of the characters as the story progresses.

The narration is outstanding.

This book was provided free of charge with the understanding that an honest review would be done.

It's fast paced and action packed. Cool story and easy to listen to while multitasking!

Continuing from where Powered left off Dynamo is literally the next chapters in the Mech Wars series and I'm listening to them in one go like it's a long book. In my experience it's the best way to listen to Scott's books and so if you're reading reviews to see if the second book is any good.. it is!

Author Scott Bartlett's Mechs must be the biggest, baddest in the galaxy. And they just keep getting more terrifying.
The story continues to take place in two different locations and following separate groups in the Stele System: for this reason, it is advisable to have read part one,, Powered, first or it could prove very confusing. .Plenty of fierce fighting, soul searching and whisperings in the heads of the mech users: it almost feels like something is evolving. And always there to make a profit, the ever more sinister-seeming Dark Stream Corporation, dominating everything in the system.

Mark Boyett continues his narration of the series, his pleasant voice well suited to the subject matter. His narration is both nicely timed ànd well modulated, the characters individually voiced and, overall, his input enhances the enjoyment of the book.

Not, perhaps, as thought provoking as it's predecessor, Dynamo is still worth reading if your passion is for metal monsters powered by Lucid dreaming, beating and attacking each other Quite good characterisation and a twisty, unexpected plot. I guess I am as I enjoyed it.
My thanks to the rights holder for sending me a complementary copy, at my request, via Audiobook Boom