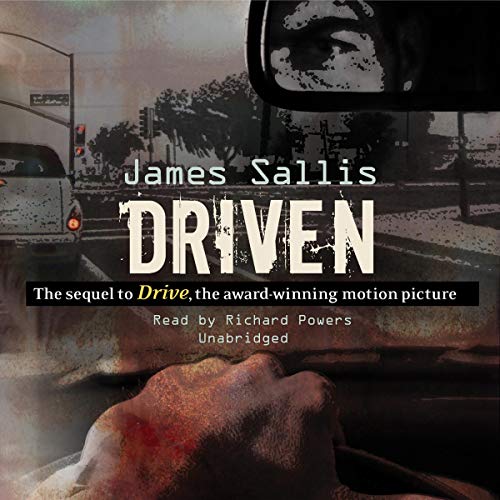 By: James Sallis
Narrated by: Richard Powers
Try for $0.00

At the end of the initial novel, Drive, Driver has killed Bernie Rose, “the only one he mourned”, ending his campaign against those who double-crossed him. Driven tells how the young man, done with killing, later will become the one who goes down early one morning in a Tijuana bar.

Seven years have passed. Driver has left the old life, become Paul West, and founded a successful business back in Phoenix. Walking down the street one day, he and his fiancée are attacked by two men, and while Driver dispatches both, his fiancée is killed.

Sinking back into anonymity, aided by his friend, Felix, an ex-gang member and Desert Storm vet, Driver retreats but finds that his past stalks him and will not stop. He has to turn and face it. Because he drives. That’s what he does.

James Sallis has published 14 novels, three books of musicology, multiple collections of short stories, poems, and essays, and more. His works have been shortlisted for the Anthony, Nebula, Edgar, Shamus, and Gold Dagger awards. His novel Drive was made into an award-winning motion picture.

What listeners say about Driven

I liked the writing style, however sometimes the jumps were a little hard to follow. narrator could've assisted with that but seemed content to power through. enjoyable listen, need to listen to drive 1st or it will prove frustrating trying to connect the dots

I really like the way this guy writes! Both this and the first book in this two book series were great. I’ve listened to samples of some of his other books and they sound promising as well. Richard Powers did a fine job with the narration. Kudos all the way around!

It's pure pulp. The writing is fast and quick to get lost, most pulp. That being said if your person who likes books such as James Roy's white jazz and this is right up your alley

What would have made Driven better?

The writer still derails from imagination

Has Driven turned you off from other books in this genre?

he lacked the passion of words he was reading to the listeners.

good sequel but not as good as Drive

Really liked Drive but this seems a little repetitious and not as original and perhaps unnecessary.