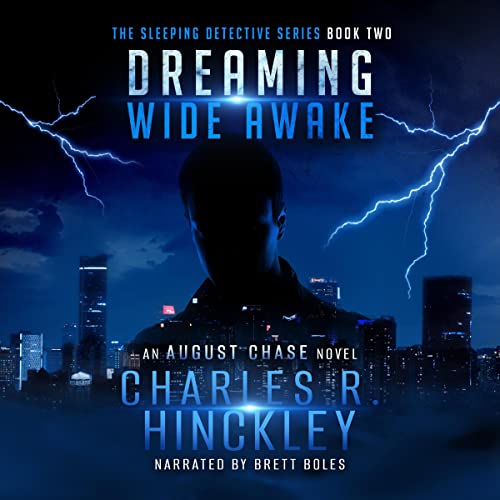 August Chase has psychic dreams that help him solve cases. But they’ve slowed to a trickle. Unsure of his abilities as a “regular” PI, he’s approached by a desperate woman to help secure evidence to release her brother from prison. In the meantime, Gus is stalked by a strange man who wants him to work on a project involving remote viewing. As the investigation evolves, Gus realizes his stalker and the convict he’s working to release were both part of the same secret, experimental army program years back. As Gus unravels a web of police cover-ups, a string of unsolved murders, and a connection between the stalker and his client, it becomes evident he could be on the trail of a government protected serial killer.

This is the second book in the Sleeping Detective series.

Being a private detective sometimes involves special gifts.  August Chase is one of those rare P.I.’s that have the gift to solve his cases by entering a dream state and seeing events as they unfold and before they occur.  As a result of his abilities, he finds himself embroiled in a conspiracy theory, a serial killer, and a determined stalker!

Charles R. Hinckley, the author delivers a fresh mystery with a dose of supernatural and a sidekick!  A carefully constructed narrative with a satisfying ending.  The dialog is realistic, smooth, and moves the story forward.  Each character is well developed and interesting. I enjoyed exploring the “Dream World” and listening to it unfold.

The narrator, Brett M. Boles provides an enjoyable performance.  His voices are unique to each character and have attributes that bring each character into the story in a rich manner. His delivery was smooth and clean.  He projected the appropriate amount of emotion and character traits for each situation.

I look forward to more books by Hinckley and more performances by Boles!

The production and quality of this audiobook were perfect. I encountered no issues; it was clear and crisp.

Really getting into this series

Having recently surfaced from a long and thorough binge of Sherlock Holmes, I have better respect for the duo Hinckley created for this series. Though Chase and Mill don’t resemble Holmes & Watson at all, their chemistry is good and they have a bond that deepens as the stories progress. This is the second book in this series I have listened to, and the third by this author, and I find them compelling, with enough who-dunnit to keep me invested, without conforming to the traditional crime fiction tropes.

The recording was patched up a bit in places, and I think the narrator didn’t quite get the room as dead for the edits as he intended, which is a bit jarring, but doesn’t detract from the story.