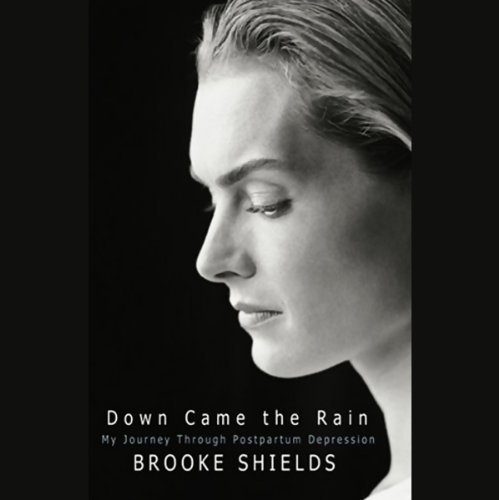 Down Came the Rain

When Brooke Shields welcomed her newborn daughter, Rowan Francis Henchy, into the world, something unexpected followed: a crippling depression. Now, for the first time, Brooke talks about the trials, tribulations, and finally the triumphs that occurred before, during, and after the birth of her daughter.

In what will strike a chord with millions of women, Brooke Shields openly shares the story of how she battled a condition that is widely misunderstood, despite the fact that it affects one in ten new mothers. She discusses the illness in the context of her own life, including her struggle to get pregnant; the high expectations she had for herself and that society as well as others placed on her as a new mom; and the roles her husband, friends, and family played as she struggled to attain her maternal footing in the midst of severe postpartum depression. And, ultimately, Brooke shares how she found a way out through talk therapy, medication, and time.

Brooke has grown up in the public eye, but this is the story of what happened to the private woman, the one the world hasn't seen before. With intelligence, humor, and startling honesty, Brooke speaks directly to the listener, making us feel close to her experience, her pain, and her ultimate triumph.

What listeners say about Down Came the Rain

A New Fan of Brooke

I have grown up watching Brooke Shields. We are about the same age and I can say that I have never really thought about her one way or another except that she was beautiful and probably vacuous. I bought this book reluctantly because my husband and I are trying to have a baby and I was reading everything I could find from science to moral support. Let me say that I was floored by her honesty and comforted by her courage. I can now say unequivocally that I am a fan of Brooke Shields. Her storytelling kept my attention from start to finish and the sound of her voice is a pleasure to listen to. I cannot recommend this book highly enough. I would give it 6 stars if I could. The only thing that would make it better is if it were unabridged.

Brooke Shields' honesty and unwavering self-examination is remarkable. The struggle she describes is as courageous as her willingness to share her experiences with the people she has come into contact with and with her readers. Her tale will resonant with the countless women who have experienced postpartum depression, as well as those who struggle to become pregnant... for many it will become a favorite and a comfort.

It was not, however, anywhere near the quality work I'd expected. Ms. Shields' narrative fell into repeated very-very-very long descriptions of her dark feelings: when they first occurred they were described at length; when they resurfaced, they were again described and compared with the first description; later, to elaborate on her memory of those feelings at a different point of her life, she fully described them again; and, finally, she described them again when she wanted to remind the listener why her emerging insight was important. I thoroughly believe feelings need to be validated and understand why Ms. Shields felt the need to turn her feelings over and over in the process of examining them, but, frankly, the text (and her voice as narrator) got whiney.

Bottomline: My review is mixed. Ms. Shields has made very significant personal progress and this courageous book will encourage countless others to fight back again postpartum depression and other demons. But, although this book is a powerfully poignant journal - it is not a brilliant memoir nor even a well written commentary.

fantastic look into this awful affliction

Brooke Shields does remarkable job at recounting her days dealing with post partum depression. This book was interesting and helped me deal with my own demons.
I believe it took incredible courage on her part to delve into the darkness and come out on the other side, an author, helping countless other women.
This story is compelling and inspiring.

This is the entire book. If you are interested in any other subject or aspect of Brooke Shield’s life, don’t read this. If that is your subject of interest, this is the book for you.

A must listen or read

PPD/A doesn’t discriminate. It can happen to anyone. Please don’t hesitate to reach out if you need help.

My therapist recommended I read this

My therapist recommended I read this book when I sought help for ppd. My first thought was “I know what I’m feeling, why would I want to read a book about it??”...but I’m so glad I did!! This book helped me feel less guilty about how I feel and made me realize I’m not alone in what I’m going through. Validating and understanding my feelings was the first step in feeling better for me.

Must read for any new mom.

Postpartum depression is real! Don't be afraid to reach out for help. So thankful that Brooke was brave enough to share her experience. I hope this book will help many.

I am currently suffering from PPD and it was nice to hear that I am not alone. I'm going to see my doctor tomorrow and ask for meds to help cope. I really enjoyed how real she was and how she didn't hold back even the darkest thoughts she had.

I purchased this audiobook while going through postpartum depression. It gave me hope that it will go away and that I am not crazy.