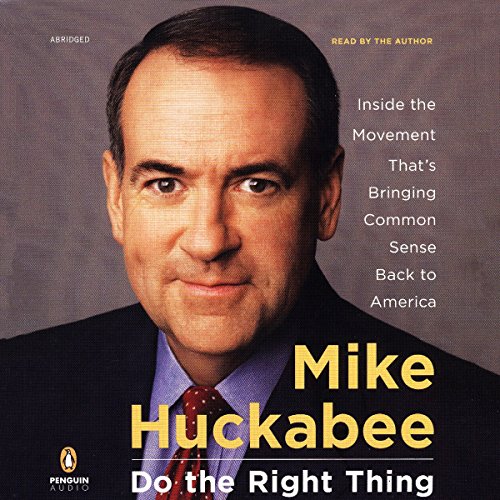 Do the Right Thing

Inside the Movement That's Bringing Common Sense Back to America
By: Mike Huckabee
Narrated by: Janice Card
Length: 5 hrs and 23 mins
Categories: Bios & Memoirs, Political Figures
4.5 out of 5 stars 4.3 (23 ratings)

Do the Right Thing

Mike Huckabee's run for the Republican presidential nomination was truly amazing. But beyond the headlines, few understand his transformation from a long-shot Evangelical candidate into a viable contender.

Huckabee now presents the inside story of his low-budget, grassroots campaign. He treated middle-class and working-class voters with respect and spoke to their concerns about the economy, society, and the way our country is run. They responded nationwide with great passion, volunteering and making small donations, transforming his campaign into a true movement.

His fans included not only Evangelical Christians, but also others who felt he was the only Republican who really shared their values. This work will remind the four million Huckabee voters that their support and hard work were not in vain. It will also be fun to listen to, full of unreported anecdotes from the campaign trail. Huckabee also lays out his optimistic vision for America's future. He explains how the Republican Party can unify its factions and win over middle-class and working-class voters.

Mike Huckabee narrates (despite what was osted on Audible) and gives a personable recount of his (given the lack of $) unexpectedly successful early rounds in the Republican presidential contest. It's a pleasant listen and I think many will appreciate that Huckabee takes definitive enough stands that you can at least know if you agree or not. He pulls no punches in noting his dislike of Mitt Romney, his condescending manner, malleable positions and efforts to buy the nomination, or of the invasion of the "faux-con" libertarians whom he says threaten to make Republicans as relevant as the Whig party. Huckabee states the libertarians have an unrealistic view of government are not willing to pay for what little government they want Perhaps more dangerous from Huckabee's view is the libertarian view that government should get out of our bedrooms as well as out of our wallets. He's anti-regulation for business - calling instead for corporate boards to govern responsibly and morally which no longer (if it ever did) sounds particularly realistic, but wants to amend the U.S. Constitution put the federal government in the middle of our most private and personal affairs. You don't have to be "for" gay marriage or "for" abortion to know such matters are totally out of character with the rest of the U.S. Constitution and the federal government has no business regulating the most private aspects of our lives. Huckabee's views are principled and without malice - but as with every politico's book conclusions are drawn based on assumptions of the correctness of underlying views - and it ain't necessarily so. That said, those same views are not necessarily all incorrect either and are expressed understandably and intelligently, yet without condescension - though perhaps with some considerable self-justification. Mike Huckabee sounds like someone capable of holding a civil discussion and in this book he does.

Huckabee presents an honest view of the political establishment as it is and the hinderances that both Democratic and Republican party-line politics present to re-capturing the American Dream. Along with his view of the current milieu, Huckabee presents sound, even encouraging proposals for how the middle class can be released from its current pressures from taxes and making ends meet and how his proposals also benefit the whole gamut of taxpayers and citizens. No matter your party affiliation or lack thereof, this book will provide an insight into the faults of the political system and refreshing ideas of getting back to basics for the benefit of everyone. Read by Huckabee, it really adds to the experience.

A new way to look at government

This book may completely challenge the way you look at what our government should be doing and what we should be doing as citizens of this great nation. Weather you are a democrat or republican, I believe you will be blessed by reading this wonderful book. This book goes beyond party lines and really makes simple and practical sense.

I like Mike. He has some good ideas. Would I vote for him for President... maybe. Sarah Palin's book Rogue was more entertaining but I was not impressed that she was capable of leading our nation. The guy who really has the best plan for bringing America back to greatness is Ron Paul. Read his book revolution.