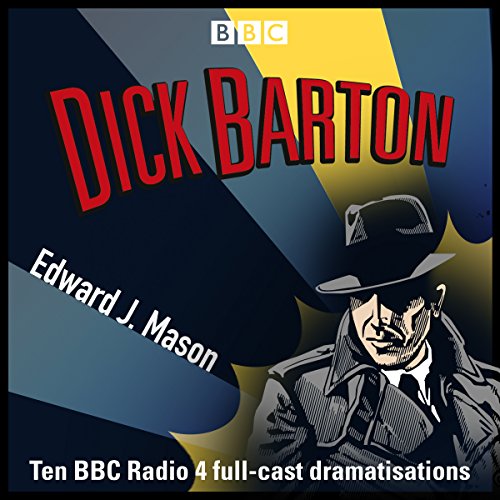 Set in an exciting world of criminal masterminds, espionage and adventure, the adventures of special agent Dick Barton and his friends Jock and Snowey were essential listening for an entire generation.

Originally running on the BBC Light Programme between 1946 and 1951, few of the BBC's original recordings still survive. However, in 1949 a number of early Barton tales were rerecorded for transmission overseas starring Douglas Kelly. This collection contains 12 of the most recognisable dramas as well as live performances, a profile of the character and interviews with the stars.

It is both impossible and superfluous to describe the good qualities of Dick Barton, just as it is impossible and superfluous to praise Sunset: Those who heard it hardly need my praise, those that have not, are lucky in still being able to enjoy it for the first time. The writing is beyond excellent; the performances (even in the 1972 remake, where old men pretend to be boys once more) are theatrical in the best sense, without being affected. This is by far and away the best and most generous release by the BBC of some of its treasure; may it prove the beginning of a fine trend.

what a mix up....has anybody actually listened to this all the way through.!!!!! episodes from previous chapter's jump in half way through new stories...!!!!!...only 22 hours of this jumble to get through!
absolutely love the series hate the fact Audible has messed up badly.
after listening all the way through.....there are only mistakes in the beginning.....still very off putting.


The first and obvious thing to say is this is very much of it's time, so no point in taking offense at any aspects of it. Totally over the top in the best kind of way, with stories and performances appropriate for what it's trying to achieve. Well worth dipping into for some light relief. Just one thing, as Audible as always haven't named any of the files, has anyone attempted to compile a contents list for this in the way others have with, for instance, the Lovecraft downloads. Any help much appreciated, from fellow customers or Audible administrators.

I loved this. I must say if Dick Barton was alive today and spoke to and about women the way he did in the 50’s he probably be in big trouble. For the era it was written and recorded in, it is very apt and it’s amazing to realise just how times have changed. You also realise that if they’d have had mobile phones back then things would have been very different.

What fantastic stories. I’d not heard these before - so it was a wonderful surprise ! Dramatic, gripping and funny. Excellent!

Love this series. The original recording have held up well. Just the sound of the introduction enough to get you wanting to listen.

Loved it from start to finish. A fab relive of childhood and all he shenanigans rhat life threw up.

Really enjoyed the episodes, so much fun to listen to the nostalgic British hero. I would definitely recommend. Superb :-)