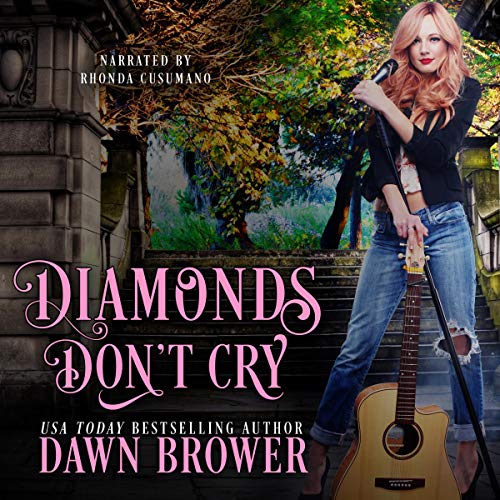 By: Dawn Brower,Mystifying Music
Narrated by: Rhonda Cusumano
Try for $0.00

Scarlett Oliver's life hasn't always been easy. Though many believe it has. The lyrics in her songs come from her soul and the music that accompanies them from the world around her. Both help her to get through some of the toughest times in her life.

When she was 18, she planned to marry her true love...until he abandoned her at the altar and ran away with her best friend. She threw herself into her music and built a career most would envy. Everything seems all right until the only man she loved returns, and his very presence might destroy her carefully crafted facade.

Jensen "JD" Drake has always loved Scarlett. His one regret was leaving her behind to pursue his own dreams. He allowed her to believe he cheated on her so it would be easier for him to leave, but no woman has ever held his heart the way she has.

Now a starting catcher for the Sparkle City Suns, he's come home, and he intends to stake a claim on her heart once again. It won't be easy, but nothing worth having ever is.

Through all the heartache, Scarlett never stopped loving JD, but she doubts she can ever trust him again. There are too many years and uncertainty between them to go back.

Just when she starts to hope, something else threatens to destroy her, and she'll need JD more than ever. Healing old wounds might be the salve Scarlett needs to find the strength to survive the upcoming agony awaiting her.

I felt that this book left me wanting more! I loved the story just wish it was longer.

DIAMONDS DON’T CRY is the first book in the multi-author Mystifying Music series. Each will stand on its own. The only unifying factor is the magic of music.

I love second chance romance stories. After ten years apart, JD has returned to stake his claim on the only heart that ever mattered to him. Scarlett is his only love, besides the baseball diamond. He just has to prove it to her. That’s what is wonderful about second chance romances. That proving – it’s not supposed to be easy, but it is the stuff that makes me swoon.

I’d love to read about Scarlett’s sisters as this series continues.

Narration: Rhonda Cusumano narrates and though it starts out a little rocky, she soon finds her own voice as she brings her characters to life. There were times that it was hard to tell which character was speaking because she was using the wrong voice for the line. That happens when an actor cold reads. Still, I like her voice and she does an excellent job at pronunciation of the difficult words.

Note: While I received this book as a gifted audiobook copy via free audiobook promo codes, my opinions are my own and are given freely.

When I listen to a story, I try to put myself in the character's position. If I was left at the alter, would I ever entertain even talking to him again? I would like to think so, find that spark of love that will always burn, and Dawn Brower does just that in Diamonds Don't Cry. Left at the alter, Scarlett now looks at her life and has to decide what she is going to do. Will she pine away wondering why JD left her there? Or immerse herself in her music career? This strong woman does just that. But what happens when he comes back years later? This is a story of second chances, forgiveness and first loves. It's about family and caring and finding those connections. Brower crafts her story with such great messages, I get caught up in the characters and live with them as they make their choices and find their footings. And while I enjoyed JD and Scarlett, the secondary story of her family filled my heart too!

Rhonda Cusumano narrates this gem. It's my first book by her and I enjoyed her voices. She has good pacing and a variety voices, easily going from male to female. I will be watching for more of her.

The essence of a great romance

This audiobook is a bit short with less than three hours, but it contains everything that makes a good romance - the essence, in a manner of speaking.
The story starts when JD left Scarlett at the altar. It was amazingly easy for me to pick up on the emotions at this point. Scarlett processes her deep wounds in her music, but when JD comes back into her life it becomes dangerous for her well protected heart.
To be honest, I wasn't expecting any further content, but I was surprised with the additional dramatic twists and turns and the supernatural sense of some of the characters. Unfortunately, all these details are just mentioned but could have been much more. I also missed some clarifying conversation. With all these great ideas, the story could have been twice as long. It remains the essence of a story that entertained me well but could have been a lot more.
The audiobook is narrated by Rhonda Cusumano. She got a great sense for the emotions and I liked her interpretation of the different characters.