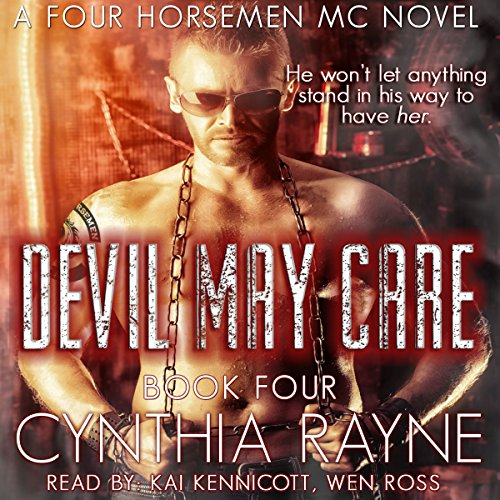 By: Cynthia Rayne
Narrated by: kai Kennicott,Wen Ross
Try for $0.00

What happens when buried secrets claw their way to the surface?

Captain is a man with many secrets.

Captain, the president of the Four Horsemen MC, has been in love with Eddie Rollins since he first set eyes on her. Unfortunately, she was already married to Joker, a man who didn't deserve her. So, Captain forced himself to move on. But the torch he carries for Eddie still burns hot. Now that both of them are finally single, he is determined to make her his old lady.

Eddie isn't ready to move on. Eddie is the reigning queen bee of the club and makes the finest moonshine in all of Texas. So fine, in fact, it has been cutting into the Beauregard's bootlegging business.

But Eddie needs his protection.

When the bootleggers come after her, Captain vows to keep her safe. But he can't protect her from discovering the ugly truth about her late husband. And about him.

What listeners say about Devil May Care

Sill loving this series. Sometimes this far in it gets a little predictable and boring. So far so good. Great job to the dynamic duo Kai and Wen!

I love the series but this one was my least favourite. The narrators are two of my favourite but the storyline dragged a little, compared with the previous 3 books. Looking forward to book 5 though, which I’ll be listening to next.

The pieces fit a bit too easily!

I’m really glad these two characters finally got their HEA. Even old people like us deserve second chances at love. I have loved Eddie’s snark, throughout this series, and her snark continues in this story also. As far as Captain, anyone who has harbored a love for thirty years, should finally get to experience the reality.
As far as the truth from the past and the consequences and resolution that followed, it was a bit too neat. Everyone was too forgiving, evidence became available in the Knick of time and no Horseman blood was spilled. Of course, I’m glad it all worked out but, it was completely unrealistic. Oh well, it is fiction, after all.
-V from Kansas

Loved Loved Loved... Kai and Wen were amazing as always, but he twist at the end really made it so much better. I loved that it kept you on the edge of your seat til the very end.

If you could sum up Devil May Care in three words, what would they be?

The Horsemen series is one of those series where it gets better with each book.
It pulls you in and you become so invested in these men and their loved ones that you are impatient to listen to the next book.

And KUDOS to Wen and Kai you all rock I listen to you all the time and you manage over and over to make it feel like I am listening to a different person every-time.

I adored how Kai sounded with the voice of Eddie. Captain and Eddie's story was a wonderful roller coaster and it was great finally getting to hear their story. Even though they were supposed to be the oldest couple around (or one of the oldest) neither of them really came off the way I am used to people their "age" being. This wasn't a bad thing though and it made it all the more perfect. This was a really great addition to the series and I love how each book just keeps bringing everyone closer together and it seems as if Eddie is what really cements everyone together with her strong will and her take nothing from anyone attitude.

What made the experience of listening to Devil May Care the most enjoyable?

the story is made to listen to , , the narration is out of this world , each character is so real

Eddie she is so strong

What about kai Kennicott and Wen Ross ’s performance did you like?

EVERYTHING they are beyond good at this they emotion , is so real

ride the high one

What did you love best about Devil May Care?

I love these series and being able to hear them brings a new life to them. I felt that Kia and Wen did an excellent job and I enjoyed hearing the characters rather than just reading about them. It's always nice to catch things I didn't not catch originally because I read it a different way in my head. The inflections, tones, etc. that the narrators use always brings new nuances to the story for me. Highly recommended.

The dynamic between the characters.

What does kai Kennicott and Wen Ross bring to the story that you wouldn’t experience if you just read the book?

New ways to look at the book/characters/situations based off of their inflections in parts where I didn't include them when reading.

For me this was an all together bittersweet book one that I have been waiting for. With the come to Jesus and ride to hell and everything in between. Confused? Give the book a read <3

Gets better and better

So good. I can’t get enough. Love the way the storyline is building. The characters are great and Kai and Wen bring them to life so well.