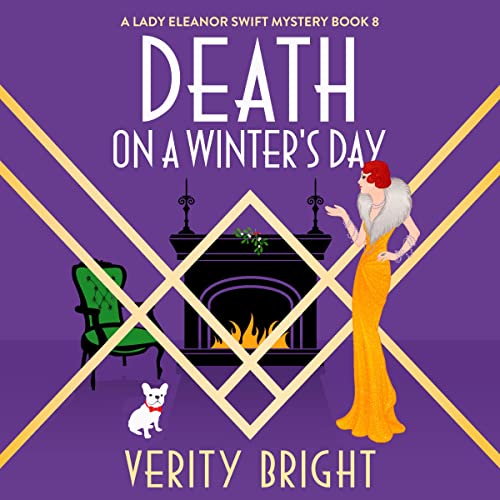 Death on a Winter's Day

By: Verity Bright
Narrated by: Karen Cass
Try for $0.00

Christmas at the castle with holly, handmade gifts, snowflakes and...is that a body under the tree? Someone call Lady Swift!

Winter, 1921. Lady Eleanor Swift, amateur sleuth and reluctant lady of the manor, has been invited to spend Christmas in Scotland, at the beautiful castle of her dear friends Baron and Baroness Ashley. Even her favorite companion, master of mischief Gladstone the bulldog, is coming along to share a slice of turkey. As snow begins to fall outside, the rather mismatched group are cozy by the roaring fire, sharing a tipple over a plate of Mrs. Trotman’s famous mince pies.

But after what was supposed to be a fun party game, Mr. Eugene Randall is found dead at the feast. A somewhat unpopular business associate of the Baron’s from across the pond, it seems Mr. Randall has certainly upset somebody. Was it what he said about Scottish whisky?

The killer must be in the castle...and when the Baron is arrested, Baroness Ashley begs Eleanor to investigate. Determined not to let her friend down, Eleanor sets about questioning the remaining partygoers.

All too swiftly, someone else is found dead, having apparently fallen from a high balcony. As if one murder wasn’t enough to put a twist in the tinsel! Eleanor knows she’s skating on thin ice now. And when she discovers a hidden document that points the finger of suspicion at the unlikeliest of suspects, she realizes there’s more to the story. Can Eleanor catch the killer before it’s time for Christmas dinner?

The perfect cozy mystery to curl up with this winter! Fans of Agatha Christie, T.E. Kinsey, and Lee Strauss are in for a festive treat.

"What a great cozy mystery! I am hooked! This is the best book, bar none, that I have read this year.... An extremely witty, fast-paced mystery.... I love the heroine, intrepid adventuress.... A most enjoyable read!" (Reviews by Carol in Tallahassee)

"What a wild ride it is!… Gripping.... This book is what would happen if Downton Abbey and Agatha Christie had a baby. Fun, fast-paced read with lots of charm!" (The Literary Wife)

"I was literally on the edge of my seat until the last page trying to figure out the mystery. It’s an adorable, captivating book." (Washington Life Magazine)

What listeners say about Death on a Winter's Day

Death in a Winter's Day

This is another sweet mystery, with murder and mayhem along the way, and a bit of romance thrown in at the end. Just Fab. Read brilliantly again by Karen Cass.

I just adore this series and inevitably zoom through them on the day of release, A delightful historical cosy that just gets better and better