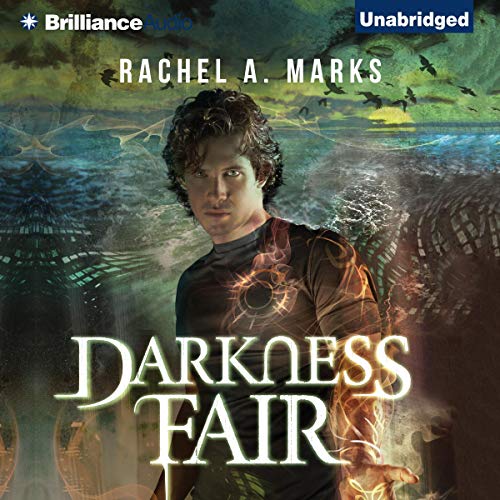 By: Rachel A. Marks
Narrated by: Will Damron,Kate Rudd
Try for $0.00

Against the backdrop of an ancient battle between the forces of Light and the forces of Darkness, Aidan struggles to control the newly awakened and enigmatic powers that seem to be his only hope for rescuing Ava, his little sister, trapped somewhere beyond the Veil. As he gravitates to Kara, the beguiling and dangerously unstable girl who helped him realize his abilities, a terrible mistake of fate is revealed that points him back toward Rebecca, whose role is becoming more critical to the battle. And no matter what his heart wants, it might be too late to stop the pieces already in motion.

Without knowing the sacrifices that will be required of them, Aidan and his motley crew of friends - all with their own roles to play - must face the demon threat head-on. They're the only ones keeping the growing army of Darkness at bay, and if they fail, the future of humanity could be lost.

What listeners say about Darkness Fair

i can not wait til I get the next book. will start it tomorrow. t hanks.

I don't understand how the author just has Aiden go with staying with Cara. Sid and Cara manipulate him meet her and lie about her being the one to awaken his power. If Sid doesn't put that mark on her he never feel the need to know he would have went to Rebecca instead. the fact he just gross over that and tries to find if Rebecca is the one should be with instead is just stupid. only reason I am still listening to the story I want to see his it ends with Ava.

probably the worst book I have purchased. the first book was fine, but the dialogue is worse than an infomercial.

Just about hung on

I wanted to put this book down. Just couldn't take it anylonger. Strange happenings but everyone hides their feelings thinking that will help. So frustratIng. Book became worse and worse. If there is another book i just can't read it.

The endless flashbacks from hell

These books could have been hood... BUT the author for some reason felt the need to endlessly inturupt the story with these needless flashnacks. You get the idea of what happened the first time. Really the break up and detract from the story and if I didn't get them for free I wouldn't have read them.

A GOOD POTENTIAL STORY LINE BUT

story line has potential BUT author is WAY to preoccupied with adolescent hormonal rages and her descriptions thereof WAY overdone. I'm just a few chapters in & already loosing interest. If you like twilight like stories you'd probably like this

Has Darkness Fair turned you off from other books in this genre?

depends on what genre you'd put this in

Which character – as performed by Will Damron and Kate Rudd – was your favorite?

Do you think Darkness Fair needs a follow-up book? Why or why not?

not the way this one is going

I have loved every minute of this book ! The actors are so terrific! 💗

will defenetly be buying

I love these books. they are very immersing and detailed and the story has u on edge the whole time. all of the unexpected things that u'd love in a good book this one has. very worth owning the series.

Really enjoyed the 1st in this series and this sequel continued with another great story.
I'm downloading the 3rd now