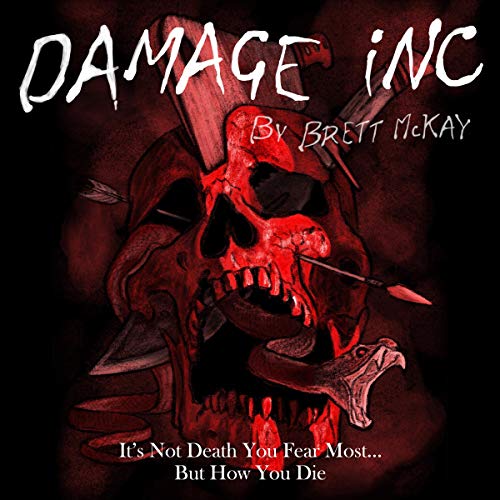 By: Brett McKay
Narrated by: Christopher Marsh
Try for $0.00

"Imagine demon assassins who kill their victims by creating their worst fears.... Now imagine they’re after you!"

Link Balsey is working on a better life for himself after making stupid mistakes that cost him his long-time girlfriend of five years and turns his focus into his carpet cleaning business and best friend, Dante.

When he arrives at the mansion of his next customer, he’s instantly attracted to the woman of the house, Becca Falco. She continues to order services from him over the next three days, and she’s as into him as he is her. The only thing in the way is her abusive husband who happens to be a mob boss. He’s got connections to assassins and the police, and as his suspicions of their affair escalates, Link realizes it’s either kill or be killed.

But hiring Damage Inc., a company of demon hit men from a parallel world, could be opening Pandora’s box, and unleashing a string of nightmares come to life that may be impossible to put back.

What listeners say about Damage Inc.

I read this book a while ago and couldn't put it down so I wanted to hear the audible version. I was not disappointed! The reader was great and depicted each character excellently. I had almost forgotten the twists and turns of this story, my husband and I listened to it together and we were on the edge of our seats. This is an exciting suspenseful book well written and well read.

I really enjoyed this book and the imagination of the writer. I can't wait to read the next one

I very much enjoyed reading Damage Inc. it’s a quick fun horror novel filled with suspense, action and stomach churning gore. The great story was really brought to life by the narrator who’s reading leant to the twists and turns of the book. The wrong narrator would’ve made this goofy but I think this reader knew when to be very expressive and when to let the suspense creep. I will definitely be checking out this authors’ other works!

I received a free copy via a promo code on Reddit. Damage Inc. is a fun and unique crime thriller with horror elements. The story is well-constructed and fast-paced without a lot of unnecessary detail. The narrator uses a variety of distinct voices which really add to the toungue-and-cheek humor of the story. At times, the pace of the narration is a bit fast, but not in a distracting way. Overall great experience!

I started this book leaning back in my chair but before hair way I was on the edge of my seat. didn't want to stop listening. great job!

Fun B movie horror with a disinterested narrator

If you're like me and get a thorough amount of an enjoyment of classic B movie adventures, than I can absolutely recommend giving Damage Inc. a go. The book itself is filled with all the tropey characters and scenes we've all come to love from that genre. All the way from edgey demons to love struck protagonists with questionable morals. However, I unfortunately have to warn that monotonous, dreary and often inaccurate narration really detracts from the experience, and more than once dragged me kicking and screaming out of the story.

I still recommend Damage Inc. I got a lot of fun out of it, but give the sample a listen before proceeding, just to make sure you can handle it.

What really scares you?

One of those stories that start out with already in the story and backfills information as you progress. Luckily, it’s intriguing right-off the bat.

Would you sell your soul, for deceitful lust? This book had a very nice Stephen King vibe to it.

It’s only a short book, and lacks some of the finer detail, but there is still great description of characters. The story is all there, and just enough left out so your imagination can fill in the blanks.

If you’re scared of what scares you, you’ll probably get a kick out of this book.