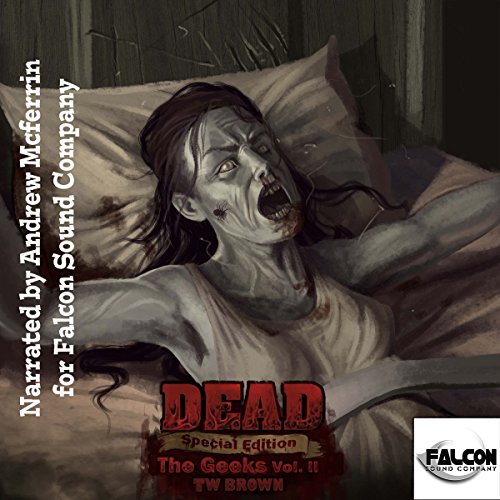 By: TW Brown
Narrated by: Andrew McFerrin
Try for $0.00

This is a compilation of the second three books in the DEAD series: DEAD: Winter, DEAD: Siege & Survival, and DEAD: Confrontation. This special edition allows you to sink into a DEAD world with your favorite people and not be distracted by those long absences, as other stories intrude and get in the way.

Special editions have been released for all three of the storylines that exist in the DEAD books:

What listeners say about DEAD: The Geeks (Vol. 2)

I wish Mr. brown would continue with this story

I loved this book TW Brown can create interesting chatter characters. I don't think he should limit himself to just this type of book. I can see him writing a space opera or just about anything. I'll leave with this its T W Brown. I have listened to all of his audible book. its brown read it or listen to it you'll love it

Where does DEAD: The Geeks (Vol. 2) rank among all the audiobooks you’ve listened to so far?

All the audio books i have listened to about zombies and apocalypses the whole DEAD series would be at the very top. If i include every book i've listened to it would still be near the top

Valerie was one of my favorites about this story. I love how she just is the way she is and likes to be around people but is perfectly happy to do things her way in her own home. She is the Princess of Sage Farms! I liked how this shows how different military trained people compared to civilians react to the changes that have happened.

Have you listened to any of Andrew McFerrin’s other performances before? How does this one compare?

He does great in all the performances.

It was, but it was just a little too long for one sitting. I couldn't wait to get back to it and find out what happened next

It was very crazy with the whole willa(willow?) i can't remember her name exactly. I was expecting something quite different with her. I did think the whole military set up was a bit strange and wonder how the infection will start to spread through them.