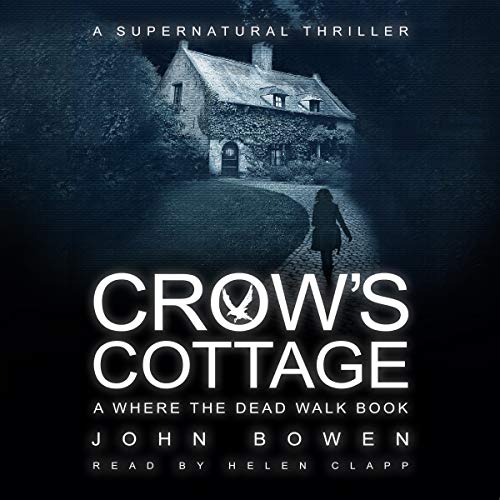 A dead man. A missing woman. A haunted cottage. A secret hidden for 30 years....

In 1988 a famous record producer took his own life and a woman vanished after attending a party at Crow’s Cottage.

When the cottage’s owner passes away decades later, the property falls into the hands of his nephew, who finds a strange box hidden there. It is a replica of an infamous occult device called the Mephisto Arcane. In the wake of its discovery come sightings of an apparition. The crew of the paranormal TV show Where the Dead Walk are invited to investigate the haunting.

They are about to find the past guards its secrets jealously, and that unlocking them has consequences.

The much-anticipated sequel to the Amazon international Top 100 best seller Where the Dead Walk.

What listeners say about Crow's Cottage

Crow's Cottage by John Bowen really pulled me in. I enjoyed this sequel to Where the Dead Walk. Some characters from the first book are highlighted in this one, but the story itself is a standalone. I found both the mystery and supernatural elements to be compelling. The twist at the end was awesome! Helen Clapp was amazing bringing the characters to life with her performance. I could hear who was speaking, which adds to the book.

I was given a code for this book by the author.
Well written and performed, as are all of John Bowen’s Books.

Crows Cottage
Fabulous! Investigations of “Where the Dead Walk” continue with a new mystery within a mystery where pasts and secrets are uncovered. Missing people, bodies, a magician and a body. Brilliant!

Enjoyed it but slow moving at times. To many unnecessary characters mucking up the story

Great stand alone with in the series!

This was a really good audiobook. The character development was great and there were plenty of twists and turns to keep the reader glued to the story! I have not read the first though I most certainly will now!
The narration was great and the story flowed smoothly.

I tried to come up with a better title to this review and I have tried to be positive about this book but I am struggling. This book was simply not as good as the first book. I liked that one because it had a good plot and I liked the characters. This tried so hard to be a follow up but the characters were not as likeable, and it just tried too hard but just did not quite make the mark.

2nd in the Series

Not my usual genre but I needed a bit of a change and was pleasantly surprised, not having listened or read the 1st novel it did not make any difference. It did seem a bit slow to start but with some perseverance soon got very interesting, and starts with the passing of the owner of Crows cottage, and there have been some eerie sightings going on, and Cloe a presenter of a tv paranormal show head the cast to investigate, with some of the old team, soon learns that a record producer is missing presumed dead and a girl again missing presumed dead, what happened to these people was it natural causes or something more sinister ? will the cottage give up it's secrets? a complex tale of intrigue carefully wound, the characters are likable realistic and raring to go. I did think the narrator spoke very fast at first but seem to slow up towards the end but was clearly
spoken. a very different and pleasant listen.


I loved book 1, so much I listened to it twice. This 1 though is even better.
The group, new addition, others gone but not forgotten, agree to investigate a new house, handed down in a will. But is it haunted?
So worth listening to or reading, you could do it alone but honestly it’s really worth delving into the 1st story to get to know these characters and get spooked.
Great narration too. Kept the story flowing really well.
Excellent book

I can't deny that I was a bit disappointed to learn that the two main characters from Book 1 would not be starring in this book, but I needn't have worried!
This story follows Chloe, the new presenter of the show, who joins what is left of the old team to carry on their spooky investigations. While filming for their next show, they visit Crows Cottage where reports of ghost sightings and a supernatural discovery could be just what they are looking for. The investigation is anything but straightforward and takes the team in all different directions.
This book felt like a bit of a slow burner to start with that really picked up towards the end. I liked the inclusion of some of the old team as well as some new and interesting characters, especially Chloe.
Another twisty, creepy tale that is weel worth a read!

A mix of the supernatural and mystery thriller

This was the second book in the series of Where the Dead Walk by John Bowen. Having read the first book I had an idea of what to expect but this book was even better. It’s part ghost story and part mystery thriller which kept me guessing to the end. The background research into how the crew of of the paranormal tv show prepare added to the authenticity and the characters are vivid and believable. The plot at the heart of it is a page turner, I read it in two sittings having recorded tv programmes I had planned to watch. A very enjoyable read.

I really enjoyed this book.. A story to engage.. Fabulous narration..
I look forward to hearing more about WWTD
Thank you 😊👌

I loved this story about a group of Ghost Hungers investigating the mysterious sighting at Crows Cottage. As the team get dragged into the story and characters from the glory days of the cottage they find out about about the apparent suicide of a famous record producer and a replica machine with links to the occult. As they delve deeper into the history they find a story that is puzzled full of lies and torment whilst putting themselves in danger as well. Someone does not want the truth to be found.
A great story and the narrator has a beautiful tone which really added to the story.

With this supernatural, spirit searching story, I feel it's only right for me to start with a fact, which is easy to prove. Helen Clapp is a voice performer of gargantuan talent and uses all her gifts to make this already spine tingling book an experience that will move you. Crow's Cottage is a 'double dipper'; I read the book, now I've listened to the audio, tomorrow I may buy the company. Does it make me a loser that I'm desperate to hang out with the Where the Dead Walk crew? Yeah, well, if it does, I don't care - because they're great. And therein lies the extra special ingredient of this tantalising tale. The characters are so credible, so exquisitely drawn that you feel you know them. They are people you have definitely met somewhere, if only you could remember exactly where! How I would love to believe in the presence of spirits and the paranormal. Maybe they do exist and my long dead, much loved, departed relatives are simply so relieved they no longer have to listen to my inane conversation that despite being able to contact me they have chosen to maintain radio silence! Hhm, I'll need to ponder that some more. But, what I have no need to ponder is that Crow's Cottage is a cornucopia of delights. Bursting at the seams with pithy dialogue, perfect prose and clever and quirky ideas. It is a joyous gift of a book full of entertainment, which will transport you to a state of ecstasy and bliss. Who doesn't want to be filled with a gem of such opulence? Go on, treat yourself, you can always thank me later.

The eagerly awaited second book in the Where the Dead Walk series did not disappoint. WTDW is filming the next season with a new presenter and Co Producer, Chloe Harker and Ray Darling, with resident medium Charles still firmly in place. Giles Langley inherited Crow’s Cottage from his uncle Hubert, but when the cottage is renovated the builders discover a mysterious box hidden away. There are reports of strange sightings and a 30 year mystery resurfaces. This sounds perfect for the next series and our intrepid trio investigate. A great spooky tale with some thrilling moments, I couldn’t stop reading.

I couldn’t finish this book, so boring .
Listened until chapter 1/ trying to give it chance to move on but gave up.
Wasn’t going anywhere and rambled on about other subjects that does not seem to have any relevance.
Didn’t enjoy the narrators voice either 😔
Waste o a credit