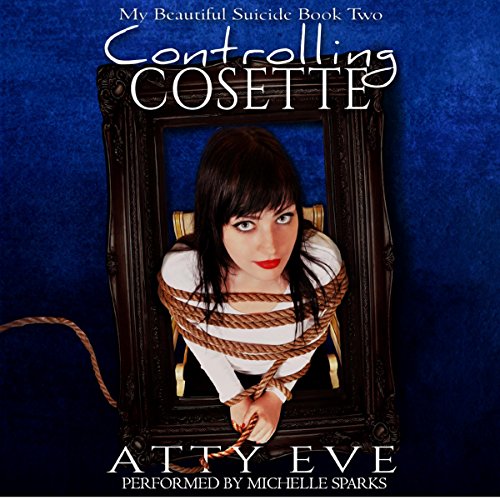 By: Atty Eve
Narrated by: Michelle Sparks
Try for $0.00

Cosette Hugo thought she had fulfilled her wish for a beautiful suicide...but she survived. As she begins the slow road to recovery, the guilt of what she has done has become overwhelming. She vows to put her murderous alter ego, Bonnie, behind her forever.

In order to do this, Cosette must rescue Hilda and keep the truth about Hilda's kidnapping a secret. During the rescue things go wrong, and Cosette is forced to kill again. This wakes up Bonnie, now stronger than ever. Tired of the inside turmoil, Cosette has to decide who is going to be in control.

What listeners say about Controlling Cosette

If you like them dark and twisty, this is a series for you!
This book went in a different direction from the first book, this one was more about Cosette and her addictions and need to control! While the first book reminded me of the movie Heathers, this one didn't at all! This book picks up right where book 1 ends and it ends leaving you wanting so much more. There were times when I thought "OMG, what am I reading" and times when I was thinking "this is so F'd up" and I loved all of those times! I can't say much more without giving spoilers so I'll just say this book sucked me in and I can't wait for book 3!

The narration was great, perfect choice for these characters!

Wow I don’t even know what to say. This second book was perfect. Even better than the first book! Sooo unlike any other book I’ve listened to. I love twisted and depraved, which this story totally was, and my sick dark soul loved every second. I was a little worried at the beginning when Cozy said she was going to straighten her life out. I thought well that’s going to be boring. I should have known better. I highly highly recommend this series!

This picks up right where the first one left so I highly recommend you read that one first so that you do not get lost with this second book. There’s so much I want to say about Controlling Cosette but I can’t say much as I am afraid that it would spoil this for anyone who is reading this review. I can say that this is a fast-paced story that continues to let readers immerse themselves and get lost within the storyline and the fantastic narration. The author weaves a story that leaves you holding your breath with this well-developed story chock full of fantastic characters and I look forward to getting my hands on the next installment.

{I requested a copy for reviewing purposes via AudioFlow and made no guarantee of a favorable review. The opinions expressed herein are unbiased and my own.}

Bizarre but beyond entertaining......

Controlling Cosette is a completely bizarre story, but it is so fascinating that I had to keep listening. I would highly recommend reading the first book in the series, MY BEAUTIFUL SUICIDE, before starting this book. I didn't realize this book was part of a series, started listening to it, and was completely lost. However, the first book is equally as entertaining as the second, so that was not a hardship! I agree with most of the reviewers that this is not a book for the feint of heart or for young readers. Even though the main characters are teenagers, the material is very dark and the situations for mature audiences.

If you are a fan of dark fiction, you will enjoy this book. I loved watching the constant struggle within Cosette to control her darker side. She had her conscience and her best friend pulling her towards goodness. On the other side, she had her boyfriend and her evil alter-ego Bonnie pulling her towards darkness. Atty Eve did an excellent job of throwing obstacle after obstacle in the way of Cosette reaching the light, which made for a very fun reading experience.

Michelle Sparks delivers a perfect performance. She brings the characters to life and her narration is smooth and flawless. I would definitely listen to another book narrated by her.

I received a copy of this audio book is from Audio Boom and the author in exchange for an honest review.

Wow! She tried the Beautiful Suicide, but alas lived through it and is left here to deal with the aftermath... of what she's become, of what she's done, and what she'll do now.

Another dark & twisty book in the series, this will take you in, chew you up & spit you back out. Starts where the last book left off, and the you thought you were off that crazy ride, but now it's back!

Mind-bending, twists, intrigue, and darkness all mix and mingle in this second dose. Take it, and enjoy the ride!

Twisted psychological thriller. This audible will set you on pins and needles from beginning to end. Cosette desperately wants to change her life, but how can she when Bonnie keeps taking control? This is a must read/listen of the year!

Michelle Sparks is perfect for the characters. She adds a whole new dimension to this audible.

My title is misleading, sort of. I didn't know if I wanted to love or hate this book. And that's only because of the age of the characters. I feel weird being turned on at points and creeped out lol. The story line is so different. It's dark and twisted. Controlling Cosette is a wicked, reverse harem, polyamory, mystery, thriller that made me say " OH. MY GOD" in every chapter!

Michelle Sparks is back again and she does a phenomenal job. She seemed to be more in tuned with the characters and her delivery is spot on. Great book and great performance.
Bring on How to Kill a Pedophile!

There are no words

I don't even know. I was warned but holy crap. There are no words.

Just when I thought it couldn't get any more messed up, boom there it is. So freaking twisted.

The narrator was perfect!

This was good,but not as good as book 1.I found it just a bit too far out there to be believable.The creepiness was more how everyone 'loves' Cosette. Michelle Sparks was a fine narrator for all characters.I was given this book by the narrator,author or publisher free for an honest review.

What an incredible continuation of this series. So unique, with a story-line that grips you from the beginning and a deep message in the struggle of good vs evil. Atty Eve wrote with pure magic! Can't wait for more!

If you don't ask the question,I won't have to lie.

Controlling Cossette continues from the conclusion of My Beautiful Suicide, and it is definitely advisable to be familiar with that book before commencing this, the second in the series.

Being impressed with the originality and pace of book one, as well as being intrigued by the futures of the main protagonists, this reader came to this second part with pleasurable anticipation combined with the expectation of something new and different. It would be very hard to leave even a brief synopsis without spoilers, suffice it to say this reader would have preferred the story to had ended with book one, the originality of My Beautiful Suicide seemingly disintegrating into an alternative Buffy, the Vampire Slayer plot line, with additional off screen sex romps and sado masochism. And loads more baths! With a third book which will, hopefully, return to something more creative, book two has the feeling of a filler between the tales, setting the scene for a more fulfilling climax.

Once again, however, the narration is excellent, with Michelle Sparks becoming the main protagonist, Cossette Hugo, interpreting her first person account with clarity and enthusiastic emotion. Another good performance which kept this reader listening to the end.

My thanks to the rights holder of Controlling Cossette who, at my request, freely gifted me a complimentary copy, via Audiobook Boom. Sadly, it was a disappointment and, if I'm totally brutal, unlike it's predecessor, rather tedious. Not a book that I could recommend: it didn't even have the feel of plausibility. However, I am still interested in reading book three to see where this whole enterprise is headed.