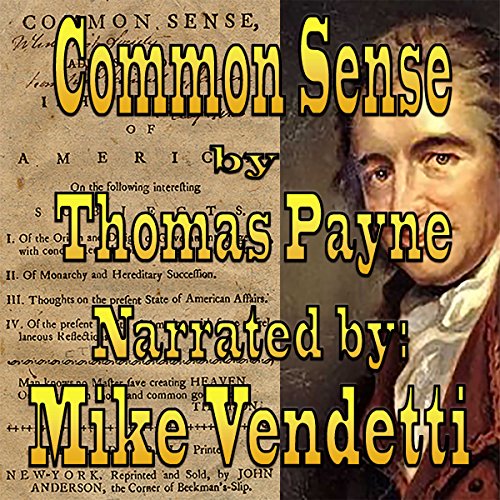 By: Thomas Payne
Narrated by: Mike Vendetti
Try for $0.00

Read by award-winning narrator Mike Vendetti, Common Sense is a pamphlet written by Thomas Paine in 1775-76 that inspired people in the Thirteen Colonies to declare and fight for independence from Great Britain in the summer of 1776. The pamphlet explained the advantages of and the need for immediate independence in clear, simple language. It was published anonymously on January 10, 1776, at the beginning of the American Revolution and became an immediate sensation. It was sold and distributed widely and read aloud at taverns and meeting places.

What listeners say about Common Sense

The way payne words it makes it entertaining and a great look into how america was founded and the ideas that started the revolution.

A must read for students in today's world

A great book that rings true even today, just replace the talking about splitting with England with the way our government(s) are today & it fits perfectly... Also Payne wrote so clear, concise & intelligent that it's literally able to bring the reader back to that period like you're looking through his eyes...