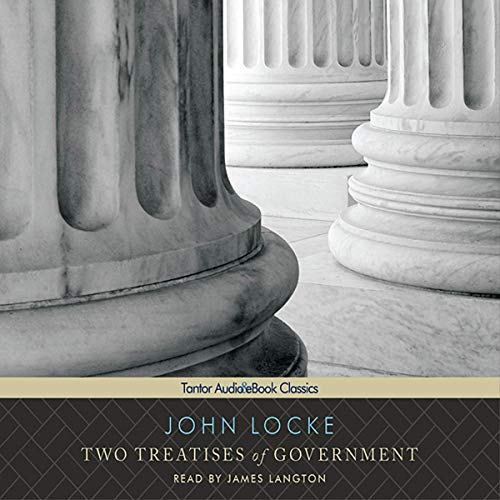 By: John Locke
Narrated by: James Langton
Try for $0.00

Often considered the foundation of political liberalism, John Locke's Two Treatises of Government was first published anonymously in 1689, in the wake of England's Glorious Revolution. In The First Treatise of Government, Locke refutes the idea of divine monarchy, while The Second Treatise of Government articulates Locke's philosophy of government, which he based upon his theories of natural rights and the social contract. In Locke's view, governments' legitimacy is based upon their performance of their proper functions---preservation of the life, liberty, and property rights of their citizens, and protection from those who seek to violate these rights. A radical doctrine at the time of its publication, Locke's theories provided a philosophical basis for many of the principles behind the American Revolution. More than 300 years after the publication of the Two Treatises of Government, Locke's ideas continue to spark debate. A must-listen for anyone interested in the foundations of contemporary political ideology, Locke's hugely influential work will retain its relevance for generations to come.

What listeners say about Two Treatises of Government

Don't let the title scare you off!

What did you love best about Two Treatises of Government?

I discovered that John Locke has a wonderful sense of humor!

What other book might you compare Two Treatises of Government to and why?

There are so many books that draw from this book for their material. Most "conservative" books quote from this one several times in order to make their case for limited government.

yes, but it is a lot of information to take in all at once so it took me a couple weeks to get through and process what I learned.

It's easy to understand why this book is so import

This is an important book that probably had a profound influence on the framers of the American government. In it John Locke totally debunks the divine right of kings. He makes the whole idea look beyond absurd, and he does so using the same bible verses that defended the idea in the first place. Locke also lays out the ideas that are so important to America, and to classical liberalism. These ideals are still important to any one who believes in political freedom and freedom from governmental oppression. From what I understand this book is the place to start as far as gaining an understanding of classical liberalism and modern libertarianism is concerned, and after listening to it you will be more enlightened.

First, I must say that this narrator is easier to follow than simply reading the text, so good is his reading.

The text itself is a very medieval thing, like all early modern works of political thought, but also a very contemporary thing, as all pieces of well-considered literature are when they bear upon perennial issues. Worth several listens, and a lifetime of pondering.

A must read for every voter

This book provides you with an understanding of the relationship of government and its citizens. It is foundational knowledge for all those who will be participating in our republic. I pray that we teach this in our civics clases.

different than I expected it to be

not having any idea what this book was about I was pleased with its content. I never knew I needed to have valid arguments for why a monarch does not get his power from God but that he only has if from the people. good stuff

I recommend this book to everyone! I wish it was on the curriculum and taught in public schools

Besides the author's use of plain language, the performance was particularly good and helped to understand this work better. The choices cadence and emphasis made me feel like I could have been listening to the author himself. Very well done.

It takes a few moments to calibrate your mind to the no-longer-common language, however it quickly becomes as comprehensible as any

I wish I had the opportunity to read this growing up! God bless American Liberty!

A must listen to understand government

This is one of the best books I have ever listened/read. It gives you the complete role of government and tells what you need to watch for when the government is off track. Every politician should read this book. Fantastic reading by Langton.

Glorious and I was sad when it ended.

he admits he does rather labour his point in the first book, but it's very enjoyable. While a serious topic I was grinning and sometimes giggling at the sharpness and whit with which he decimates Sir Robert's 'arguments'. As to the second book -. love it so much, he totally nails his point such that it's impenetrability to decent is impossible (so far as I can see). Its glorious.

Anyone who values democratic government owes a huge amount to Locke, and Langton's performance treats the work with the gravitas it deserves.

A great listen and politically intriguing.

the book is in two parts the first a response to the tyrannical power of monarchy and the second a justification for democracy and private property. concepts are engaged with critically and well so demonstrate the value towards what Locke focused primarily on the public good. best read in regards to Hobbes' leviathan and Rousseau's social contract