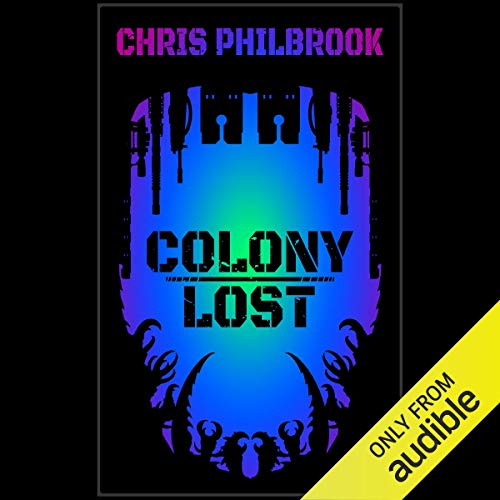 By: Chris Philbrook
Narrated by: Kevin Stillwell
Try for $0.00

Seven hundred fifty years ago, human colonists left Earth and settled on the moons of the distant gas giant Ghara.

Civilization has flourished on Ghara's fertile moons, but humanity's drive to colonize and explore is still strong. Detecting plentiful mineral resources and a rich abundance of alien life on the nearby planet of Selva, the Gharian Colonists mount a dangerous expedition. Young newlywed marines Dustin and Melody will find themselves put to the ultimate test as they forge a way through fierce magnetic storms into an unknown and utterly alien world.

Tensions mount at home, as not all of the colonists support this mission and its high cost of resources, and many are outright hostile toward the marines and scientists who are setting out to colonize the new world.

As the peace the four colonies have shared for almost 200 years starts to fracture, what the expedition finds on Selva might very well be the worst thing humanity has ever dealt with.

What listeners say about Colony Lost

this is an awesome science fiction book

Such a great book!

What did you love best about Colony Lost?

This book has so much imagination and creativity in it.

This whole story is very unique. I like the troubles that they went through, and how real everything was. What I mean is that you can imagine yourself there and hearing the two sides to expand or not to expand and the trials and troubles they go though. With this book even though its set in other worlds will make you feel like you are there. Chris gives details without going overboard. All the way around start to finish. Great book.

Which character – as performed by Kevin Stillwell – was your favorite?

This was my first time listening to Kevin Stillwell narrate a book. I enjoyed it. All the voices were different and he kept you enveloped in the story with his cadence changes.

I went into this book expecting to enjoy it, but maybe only listen to it once. However that is not what happened. I loved the book, and can't wait for more books from this world to come. I should mention that when I was giving the highlights to my son he can't wait for it to be made into a video game.

As a follower of Chris Philbrook since Adrian's Undead Diary, I was really looking forward to reading this book and I was not let down! what an awesome story line. Kevin Stillwell was perfect for this audiobook. I was upset when I finally got to the end of the book. I wanted more.

Military sci-fi &amp; bug hunts are not generally my books of choice. The author &amp; narrator did a great job of drawing me in from the opening to the finish. I recommend this for anyone looking for a sci-fi listen.

This book starts a little slow. But just stick with it for a few hours and then it will take you on a thrill ride! Far exceeded my expectations and I didn't want it to end! Now I can only hope for a sequel! Now that the author has established his universe, I only hope that he does it again soon. Already growing attached to his characters so I hope he brings them back! Bravo Mr. Philbrook!

I really loved this book and hope Chris does more. The addition of Kevin Stillwell as the narrator really knocked it out of the park. This is possibly my favorite book by Chris outside of his Adrian's Undead Diary series.

What a fabulous story.

Loved it. A unique story with lovable characters and set in an amazing exotic world. I just wished there was a sequel I could keep reading!

Bugs are gross I can't believe that in the future Raid doesn't exist. Awesome Book!

I loved this new offering from Chris Philbrook. It's different than his previous series, more Sci-fi than fantasy. Although it's different, you can tell CP is no stranger to the genre because it was a kick-ass story! Action, monster bugs, zombie bugs, giant vegetable like vegetation with killer slime, traitors, and impassable and deadly atmospheric obstacles. Sounds like fun, right?
There is also a new narrator in the mix. Most of CP's books are narrated by James Foster, whom I love. For me the narrator is almost more important than the story and it's hard for me to accept new narrators. I was so glad when Kevin Stillwell knocked it out of the park on this.
This is a great storyline. I hope CP writes more in the series!

If you are looking for a good science fiction book containing space marines, sabotage, and underestimated indigenous creatures, I believe you cannot go wrong with “Colony Lost” by Chris Philbrook.  The book is exceptionally well narrated by Kevin Stillwell; who at the time of this review has over seven hundred pieces narrated on Audible.  If you take the good aspects from Starship Troopers and blend it with Aliens, including a bit of Saving Private Ryan, and a tad of The Thing, you will have a good understanding of what you can expect in this book.  It is a well-told science fiction horror story, yet it has many of the elements one expects in a thought out story; no matter the genre.  If space marines, exploration, and intrigue sound like your type of book, I recommend you pick up a copy of Lost Colony and get lost in both the action and adventure the author takes you.  When you have one-liners such as something being, “like a monkey on amphetamines”, you get an idea of the fun and descriptive writing style from Mr. Phillbrook.

Some may be asking, what could go wrong when light-years of unforgiving space are between a squad of space marines sent to a planet for colonization purposes.  They quickly meet rather unfriendly native creatures and their mission changes from seek and destroy to one of survival.  What enhanced the level of anxiety, even more, was that the marine’s supplies of food, water, and ammunition were quite limited.  The book feels vast and is full of both adventure and discovery.  However, there are also issues occurring at the same time back on the home planet where clandestine activities along with a fair amount of intrigue make this book more than simply a space marines vs monster story.  The book felt more complex and weighty.  The planet itself made any quick rescue attempt difficult due to its atmospheric makeup and the vast distance separating them.  Neither of these aspects seemed out of place or forced in the story.

I thought the author did a really good job of including a solid prologue along with a heartfelt dedication.  The technology in the book felt new and fresh compared to many other books I have read in the genre.  There was a fair amount of military banter, insults, and competition amongst the marines.  However, the author also did a good job of including the bonding aspects showing the brotherhood of these members when events turn from bad to worse.  There was an undying friendship not only focused on accomplishing the mission successfully, but also between one another.  The book included some romantic aspects including the excitement of an unborn child and the pressure such puts on someone trying to survive. The characters had depth and complexity as the author added a fair amount of backstory to a few of them.  Because of this, the reader better understands why a character acts or reacts the way they do.

Having listened to some of Kevin Stillwell other narrated works, I was not surprised to find a professionally produced piece of work.  The book’s many characters along with their numerous accents were each performed without issue.  The pace at which the book was read and the use of inflection made for a great listen.  I also enjoyed the expressiveness used during times of action or concentrated tension.  I’m not saying the audio was perfect as there were a few times I noticed slight volume inconsistencies and at times the female characters were more falsetto than I prefer, but overall the book’s narration was excellent.

A note to parents and younger readers.  This book contains a fair amount of vulgar language, references to sexual subject matter, and some rather intense and graphic scenes of violence.  I would recommend the book to only more mature readers.

In summary, if you are looking for an action-packed space marine survival story with a few extra twists, turns, and surprises, I think Colony Lost is a good choice for your audio library.