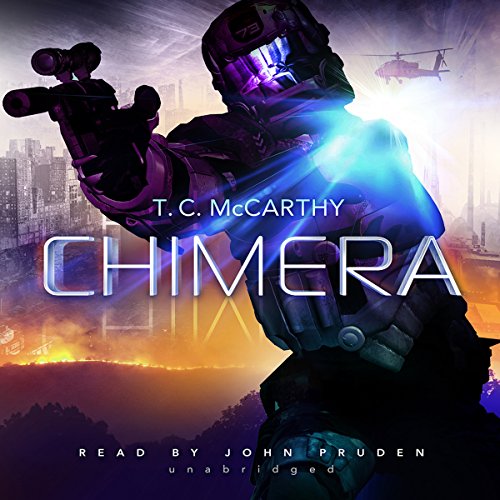 Escaped Germline soldiers need to be cleaned up, and Stan Resnick is the best man for the job - a job that takes him to every dark spot and every rat hole he can find.

Operatives from China and Unified Korea are gathering escaped or stolen Russian and American genetics, and there are reports of new biological nightmares: half-human things bred to live their entire lives encased in powered armor suits.

Stan fights to keep himself alive and out of prison while he attempts to capture a genetic - one who will be able to tell them everything they need to know about this new threat, the one called Project Sunshine.

Chimera is the third and final volume of the Subterrene War trilogy, which tells the story of a single war from the perspective of three different combatants.

T. C. McCarthy earned a BA from the University of Virginia and a PhD from the University of Georgia before embarking on a career that gave him a unique perspective as a science fiction author. From his time as a patent examiner in complex biotechnology to his tenure with the Central Intelligence Agency, he has studied and analyzed foreign militaries and weapons systems. He was at the CIA during the September 11 terrorist attacks and was still there when US forces invaded Afghanistan and Iraq, allowing him to experience warfare from the perspective of an analyst.

"The highly detailed, brutal depiction of futuristic warfare brilliantly complements the intimate narrative, which examines the insanity of war and those personally affected by it. Breathtaking and heartrending, this is the future of military science fiction." ( Publishers Weekly)
"Recalling the work of Remarque, Willi Heinrich, and especially Michael Herr, McCarthy’s delirious narrative avoids cliché and raises intriguing questions about what it means to be human." ( Publishers Weekly on Germline)
"A rapid-fire military SF adventure." ( Library Journal on Germline)

What listeners say about Chimera

Love this type of story!

Maybe it's just me, but this book seemed to be a major leap above the first two books in the series, almost as if the author had some sort of an epiphany between the first two books and this one. I listened to the first two books sometime back, and while highly decent (and highly recommended!), they didn't leave the type of lasting impression on me that this one did!

I love "Bug's" armor, his suit's "Semi-Aware" computer, the high-tech combat, etc. It's getting a little hard to find this type of Sci-Fi by authors that can pull it off, without destroying the story with too much tedious, non-important, technical detail. Many authors ruin an otherwise decent story with too much trivial techno-babble; when they describe 'combat armor', for example, I often find myself thinking, "I don't need schematics and blueprints, I'm not going to try to build the thing! Just get on with it and let me see it work in the story!" McCarthy is skilled in walking the line very well as far as I'm concerned.

The story is a little overly dramatic in some places maybe. The hero seems to me to change his core opinions overly much after some sudden 'blinding realization', or after yet another instance of deep self-reflection, only to work his way back around to just about the same opinion(s) he started out with initially after going through several more "now I see!"-type revelations... It's such a minor issue that I almost didn't mention it, but every once in a while something just seems to "stick out" in some books that will break you out of a good "Story Trance" long enough to think "Why do they keep doing that?!?"

It's not my beloved "Altered Carbon", or "Woken Furies", or "Th1rte3n", etc, but it did do the five things that a "better-than-good" book should do:
1. I got wrapped up in the book and reached that illusive 'story trance' state.
2. I kept listening LONG after I swore I was going to shut off my iPhone and go to sleep.
3. I was more disappointed each time I realized I was getting closer to the end.
4. I started missing the characters as soon as I finished the book.
5. I logged-in to see if, by some wild chance, another book in the series was available yet.

I typically give one star for each of those five things, and it did all five!

Great job Mr. McCarthy! Well done (again)! (BTW, I have a deal for you, I'll solder your next car-stereo's wiring harnesses for you if you'll spend that time writing ;)

...off to try to find another of those rare books that will leave me sleep deprived ;)

Amazing story, well written.. I cannot recommend this enough for scifi lovers.. Listen to the first two books.. after which you will be unable to stop listening to this. I wanted more.