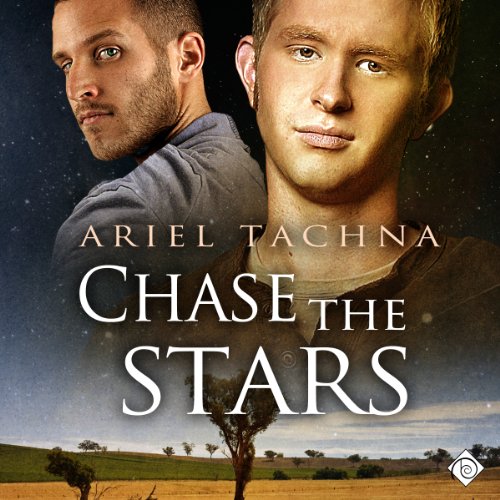 By: Ariel Tachna
Narrated by: William James
Try for $0.00

Sequel to Inherit the Sky

Twenty-year-old Chris Simms is barely keeping his head above water. After losing his mother and his home, he struggles to provide for himself and his brother. When homophobes attack him, he thinks his life is over, but then he's rescued by jackaroos from a nearby sheep station. He's as stunned to be offered a job there as he is to discover both the station owner and foreman are gay.

For Chris, Lang Downs is a dream - one that only gets better when Chris realizes the jackaroo he's crushing on, Jesse Harris, is gay and amenable to a fling. Everything goes well until Chris realizes he's falling for Jesse a lot harder than allowed by their deal.

Jesse is a drifter who moves from station to station, never looking for anything permanent. Convinced Chris is too young and fragile for a real relationship, he sets rules to keep things casual. Watching the station owner and his foreman together makes Jesse wonder if there are benefits to settling down, but when he realizes how Chris feels about him, he panics. He and Chris will have to decide if a try for happiness is worth the risk before the end of the season tears them apart.

What listeners say about Chase the Stars

I enjoyed how Jesse and Macklin are each trying to overcome fears regarding commitment in different ways, and each have to find their own answers.

What does William James bring to the story that you wouldn’t experience if you just read the book?

The accents of the characters. Usually when I read a book where the characters speak in a foreign accent, their voices default to American in my head. James definitely gets the Aussie accent right. I really hope James narrates the rest of the series, because it's one I'd like to own.

A great follow up on the first two books. The story of Macklin and Caine continue with the addition of Chris and Jesse.
I'm enjoying the Lang Downs series and will probably buy the next book soon.

The best thing about this book, aside from the narrator, it the continuation of Caine and Macklin's story from book one. Although Chris and Jesse's story is sweet and worth a listen, I really enjoyed seeing the MC from Book 1 continue their journey. I'd even say it is as prevalent as the MC in this book. Again the narrator does a great job. Worth a credit. But now I have to switch to the written book as Books 3 & 4 are not on Audible yet.

Really nice sequel to Inherit the Sky. We still get tons of scenes with Caine and Macklin, plus an interesting story about two brothers they rescue from a gay bashing. Interesting new characters, and I like the way the plot continues.

Really enjoyed the narrator. The story was good. Not quite as engaging as the first in the series, but worth the listen to catch up on the characters lives from the first book. Author did tend to belabor a few points in this book.

I love the Aussie accent

Chase the Stars is the second book in the Lang Down series and takes place a few months after Inherit the Sky. Caine and Macklin are in town hiring on new jackaroos for the season. Their lunch is interrupted when a teenager comes in yelling for someone to help his brother that’s being attacked in the alley. Chris is reluctant to believe his luck when his saviour not only saves him from being beaten to death, but also offers him a job and a place to stay for him and his brother.

Jesse has been working on stations for years, drifting from one to the other. He's not looking to settle or for anything permanent. But there's something about the wounded Chris that draws him in. What begins as showing the new guy the workings of a sheep station turns into a friendship, but also something more. It’s not only the guy that draws him in, there’s something with Lang Downs that makes him want to stay for more than just the season.

Unlike Inherit the Sky the relationship between Jesse and Chris didn't feel rushed or forced. It developed naturally. Not easily, but it wasn't out of nowhere either. I enjoyed their journey, finding a home and each other at Lang Downs. I also liked that it didn't feel as disjointed as the first book, there was more depth - well, excluding the parts with Caine and Macklin that is.

With the risk of repeating myself, something that I still didn't like was Caine. He's still as manipulative and insensitive as he was in the first book. Oh, he wants to give the impression of the caring mother hen - as long as the end results fit him. So yeah, those parts got my blood boiling and not in a good way. And why there were parts told from their POV I didn't quite understand either. I wanted the focus on Chris and Jesse, but that might just be because I'm not a fan of Caine and the less time I spend in his head the better.

I love the rest of the characters though. Neil is kind of funny, the reformed homophobe now so fiercely protective of his two bosses. It's nice to see how people can change - and when he slips up his future wife will sure put him to rights again. I like Seth and Jason, their instant friendship, and just life at the station in general.

Once again I really enjoyed William James's narration. And the Aussie accent sure did help that even more. Speaking of, this book is mostly told from Chris and Jesse's POV and seeing as they are both Aussies by birth I would have liked more than the dialogue to be narrated with this accent and not American. But that's all details.

A copy of this book was generously provided by the publisher in exchange for an honest review for Love Bytes.

A drifter a homeless boy and a sheep station

This is book 2 in a series and I suggest you read or listen to book one first since at least half or more takes up Maclin and Cain"s story and they are prominent characters.

Maclin and Cain are out hiring the new Jackaroos for the summer. While eating a young man runs in crying for help that his brother is being beaten. Maclin and some of the Jackaroos go out and help. Chris is badly beaten with a broken arm and some cracked ribs. Homeless and with a young brother to raise, Cain takes them in and offers them work.
Jesse a new Jackaroo that works summers on stations then moves on is taken by Chris and figures that both of them being gay they can have a friend's with benefits thing while he is there. He is open and upfront with Chris that he likes his life as a drifter.

I liked that not only do we get two new characters, we haven't met before but we also get more of Maclin and Cain. I liked the way the story went and loved all the characters especially Chris's younger brother Seth. There is a lot of angst at the beginning and I did think that some of that was dragged out a little.

William James narration made the story. He doest just tell he acts it all out and his many voices are amazing. I love his accents and how easy it is to tell who is talking by them. I highly suggest listening to this book/series as to reading it as I think the narration adds more life to the story. I was totally lost in the book as I went about my chores.

If you like Australian settings, the Outback, sheep stations, and some hot man-sex this is for you

I loved this story. Ariel Tachna is becoming one of my favorite authors. I love the way her stories slowly unroll and the reader is kept wondering what is going to happen until the very end, yet love every word along the way.

The characters are unique and fun to learn about as they deal with their own struggles as the story progresses. There is even a bit of steam included in the story, but it's on the back burner for the most part as there is such a good plot line going on.

I love the narrator and his accents and stutters.. he just does an excellent job all around.

I received a free copy of this book to read for Inked Rainbow Reads in exchange for an honest review.

The characters and events are real!, the environment is incredible,the ups and downs of the individuals are breathtaking and you fall in love with them and the story. This is a series you should enjoy. I did !,